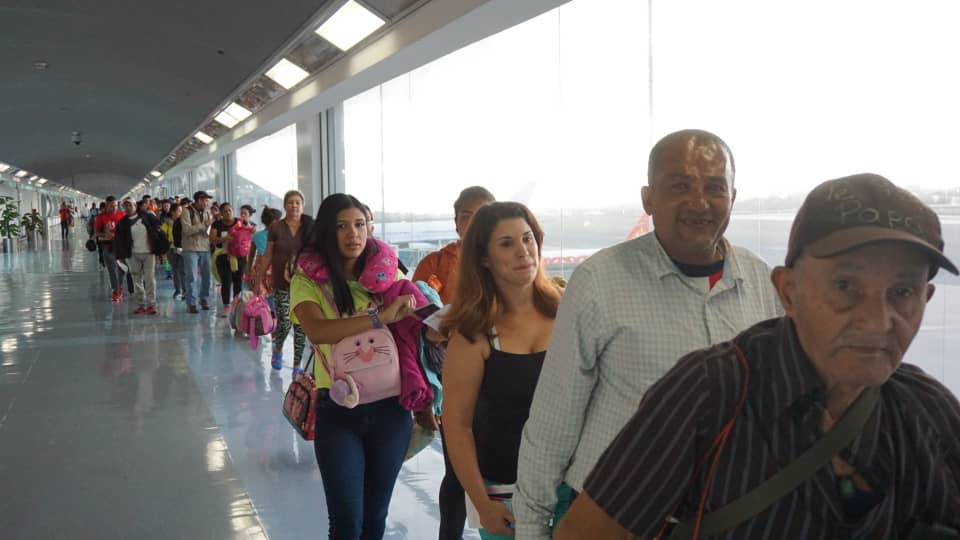 In recent years, unilateral coercive sanctions imposed by the US government against Venezuela, plus an aggressive international media campaign, pushed the migration of hundreds of Venezuelan citizens to other latitudes in search of opportunities to alleviate the situation created by foreign powers against the country.

Living in another country did not yield the fruits they expected, because unlike Venezuela, the economic, political and social system of nations such as Peru, Colombia, Brazil, Ecuador, Chile and Argentina, distorted the life pattern of those who decided to leave of his land.

This situation led the President of the Bolivarian Republic of Venezuela, Nicolás Maduro Moros, to activate a plan that has as a principle to extend a helping hand to those who, for different reasons, emigrated.

This is how 90 nationals from Guayaquil, Ecuador, join today the 14,611 Venezuelans repatriated through the Plan Vuelta a la Patria.

An example of them is the young Joselyn Soto, who reported that “to survive and bring sustenance to their home” her husband had to work long hours which were underpaid, an issue that led them to make the decision to return to their homeland.

José Ponte, returned to his country thanking the opportunity that the Bolivarian Government of President Nicolás Maduro gives to the nationals to return to Venezuela.

“We must fight for this country and work on it, outside of our country the situation is uphill for those who plan to start a new life”, said Ponte.

Venezuela, a country that receives migrants, currently becomes the country that since 2018 conceived this plan to bring back 7,145 Venezuelans from Brazil; 2,921 from Peru; 2797 from Ecuador; 764 from Colombia; 276 from the Dominican Republic; 434 from Argentina; 272 of Chile and one repatriated national from Panama and Uruguay.

To expand the coverage of the Plan Vuelta a la Patria, the National Executive with the Venezuelan Consortium of Aeronautical Industries and Air Services (Conviasa) in charge of Ramón Velásquez Araguayán, will increase the flights of this plan with the addition of a new fleet of greater capacity aircrafts.