Petrocaribe: 14 years of contribution to the development of the peoples of the region

The Petrocaribe Energy Cooperation Agreement is an initiative promoted by the Bolivarian Government of Venezuela within the framework of the Bolivarian Alliance for the Peoples of Our America – Treaty of Commerce of the Peoples or ALBA-TCP. It was born on June 29, 2005, in the city of Puerto La Cruz, promoted by the then Head of State, Hugo Chávez, and Fidel Castro Ruz, president of Cuba.

After fourteen years, this Cooperation Agreement represents a global integration mechanism that promotes regional socioeconomic development through the provision of energy and financing under favorable conditions.

It is based on a solidary and human perspective to achieve one of its core objectives: the elimination of asymmetries and inequalities. This strategy, in the short, medium and long term, contributes to energy security, socioeconomic development and the union of the peoples of the Caribbean and Central America based on the sovereign use of energy resources.

The multilateral initiative promotes regional integration and represents a source of hydrocarbon supply and flexible financing, aimed at social investment, contrasting with contributions from other industrialized countries.

The success of Petrocaribe was highlighted by Chavez during a speech in 2010, when he said: “Many countries would have had to turn off the lights and maybe declared bankrupt some time ago, if it had not been for Petrocaribe”.

Since its establishment in 2005, Petrocaribe has worked tirelessly and with commitment in all areas of the agreement, until December 2018, 356 million barrels of crude oil and products have been supplied, equivalent to an amount of 31,523 Mmusd, of which approximately 50% has been financed in the long term.

Petrocaribe, under the principles of equality of States, without interference in internal affairs, self-determination and the right of each nation to decide its economic, political and social system, meets the political will of 18 signatory States: Antigua and Barbuda, Bahamas, Belize, Cuba, Dominica, El Salvador, Grenada, Guyana, Haiti, Honduras, Jamaica, Nicaragua, the Dominican Republic, Saint Kitts and Nevis, Saint Lucia, Saint Vincent and the Grenadines, Suriname, and Venezuela, in 12 of which they have set up joint ventures and subsidiaries of PDVSA Cuba and Comsurca (Commercializadora de Suministros Regionals del Caribe).

What makes the Petrocaribe alliance so remarkable is the fact that it allows Caribbean nations to buy oil at a market value of 5% to 50% in advance, which gives these countries a grace period of up to two years.

Through Petrocaribe, the short-term payment period for 60 percent of the Venezuelan oil bill increased from 30 to 90 days. The remaining 40 percent can be paid through a financing agreement of 17 to 25 years with an interest rate of 1 percent if oil prices exceed US $ 40 per barrel.

If these countries lack the liquidity to pay what is owed, Venezuela makes an exception when accepting a payment in goods and services. For example, Cuba pays part of its debt with medical, educational and sports services, while Nicaragua pays with meat and milk.

From June 2005 to date, the Agreement has managed to install important energy infrastructure projects at the regional level:

1) Currently, it has a storage capacity of 1.75 million barrels of hydrocarbons.

2) With the acquisition of the Sandino and Petión vessels, Petrocaribe reaches its own maritime transport capacity of 920 thousand barrels.

3) On the other hand, through the joint ventures, a refining capacity of 134,000 barrels per day was consolidated, distributed among Jamaica, Cuba and the Dominican Republic.

4) In terms of electricity generation, it reaches a total of 589.35 megawatts in thermoelectric power plants, wind farms and mini-hydroelectric plants installed in Nicaragua, Haiti, Jamaica, Saint Vincent and the Grenadines and Saint Kitts and Nevis.

Through the creation of the Petrocaribe Economic Zone (ZEP) in 2013, the regional integration instrument will deepen the existing cooperation mechanisms in order to increase and diversify intraregional trade, strengthen productive sectors, promote social investment and stimulate development.

Despite the sanctions the Agreement remains standing

During the year 2018 and so far in 2019, PDV Caribe, SA, its subsidiaries and joint ventures have increased the limitations for the effective fulfillment of the commitments established for the supply of crude and products, especially due to the intensification of the economics sanctions of the United States of America.

In spite of the indicated restrictions, PDV Caribe, S.A. has found alternatives to adjust to the limitations in order to comply with the Agreement’s guiding objectives, energy security, socio-economic development momentum and integration, taking advantage of the situation to develop aspects that transcend the traditional relationship.

The implementation of the Petrocaribe Strengthening Plan (PFP) from the second semester of 2018, constituted the institutional effort required to promote from the subsidiary and from the Executive Secretariat of the Agreement, the maintenance of the presence of Petrocaribe as an important agreement for the region, mitigating the negative effect of the decrease in supply on the relationship that has been consolidated with each of the countries.

The joint ventures were conceived in order to make posible the energy cooperation policy derived from the Petrocaribe Energy Cooperation Agreement. They were formed between PDV Caribe, SA, subsidiary of PDVSA, and the state energy companies of each country, to enhance the technical and technological capacities of the member countries and advance in the development of projects that allow the efficient use and management of the energetics resources available.

Today 8 mixed companies are active between PDV Caribe, S.A. and state companies in the same number of countries (Antigua and Barbuda, Dominica, El Salvador, Haiti, Nicaragua, Dominican Republic, San Cristóbal and Nieves and in San Vicente and Las Granadinas), as well as two subsidiaries: PDVSA Cuba and Comsurca in Venezuela. 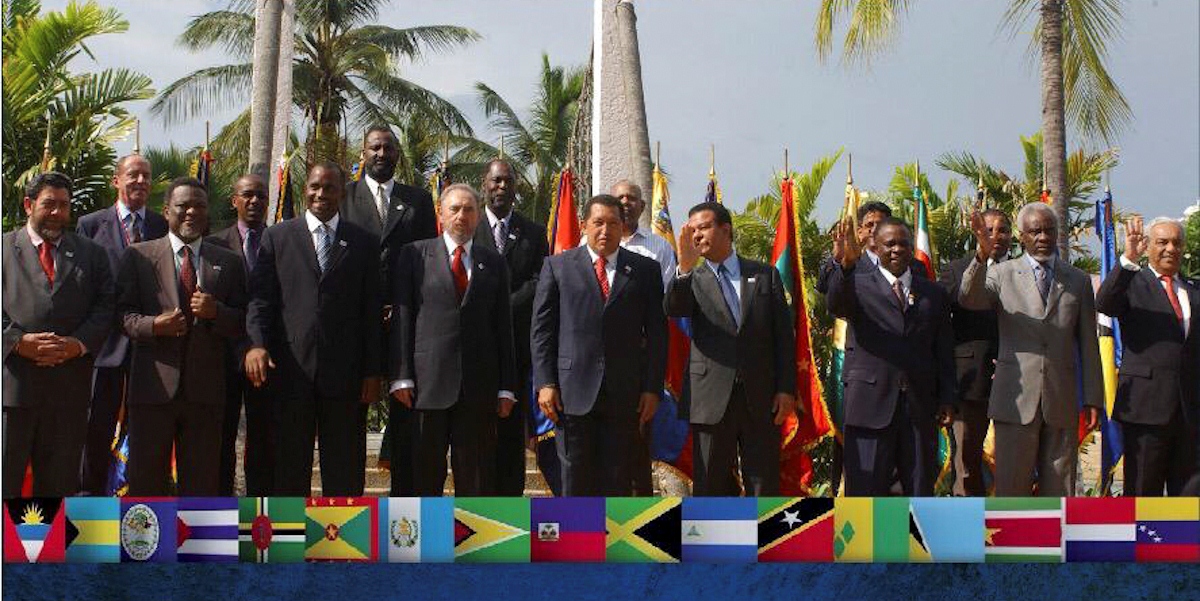