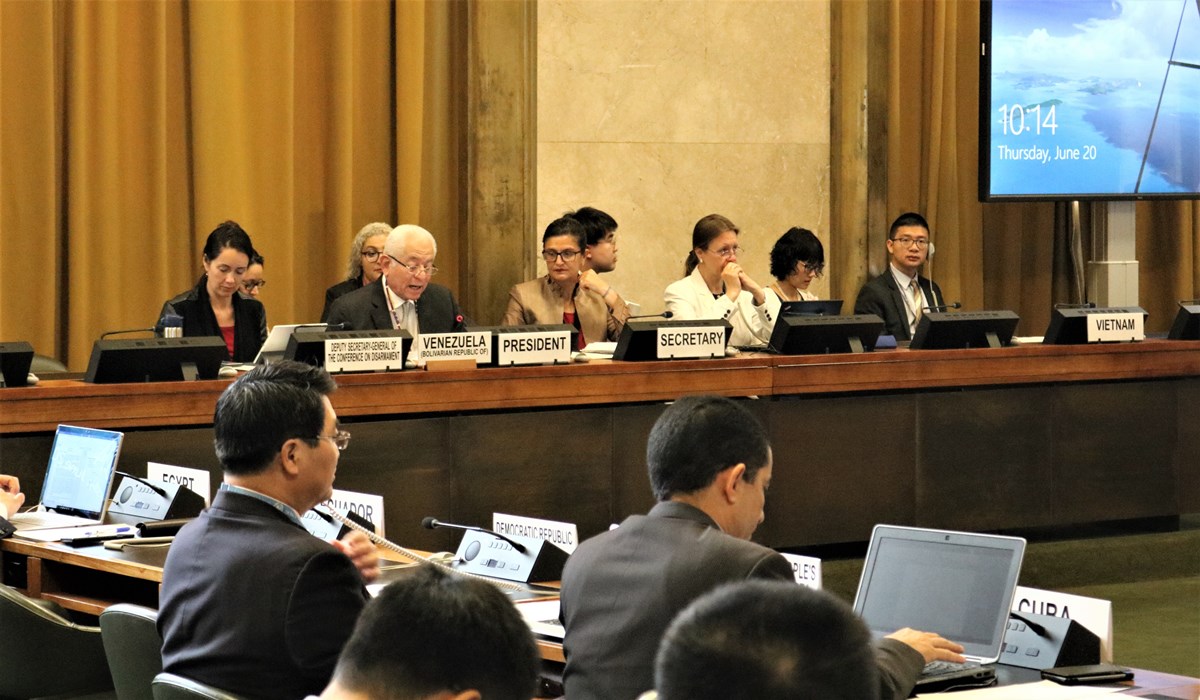 Bolivarian Diplomacy triumphs in Conference on Disarmament before the UN

On Thursday, June 20, the last Plenary Meeting of the Conference on Disarmament (CD) was held, under the Venezuelan presidency.

Ambassador Jorge Valero at UN-Geneva presented the final report to the CD giving an account of his management. The Bolivarian diplomat said that the CD, under the leadership of Venezuela, has advanced towards substantive negotiations on legally binding instruments, which contribute to the building of a world in which nuclear weapons and other weapons of mass destruction disappear, which constitute the main threat to the peace of the nations.

The CD was established within the framework of the UN more than forty (40) years ago. So far, however, consensus has not been reached for the 65 states that make up this forum, to approve negotiations on the issues on its agenda. The mandate of the presidents of the CD is to present a Work Program that establishes a roadmap to implement the themes of its Agenda.

In his report to the CD the Bolivarian diplomat presented, on behalf of Venezuela, a Draft Work Program. He stressed that during his presidency a very broad process of consultations was held with almost all the ambassadors that make up the CD. He said that there were 8 plenary meetings, 2 meetings with the Regional Groups, 30 bilateral meetings with Ambassadors, and 4 meetings with the presidents of the Conference for the 2019 session, and with the Coordinators of the Regional Groups. In addition, several meetings were held at a technical level.

The Draft Work Program was composed of 14 preambular and resolutive paragraphs and consensus was reached in 13 of them, which is why the Plan could not be adopted since the unanimous support of the membership is required.

The Work Program presented by Ambassador Valero states that: “With the objective of promoting multilateralism, the Conference decides to negotiate with a view to reach an agreement on legally binding instruments on: the cessation of the arms race and nuclear disarmament; the ban on fissile material; the prevention of the arms race in outer space; and agreements that guarantees the non-nuclear-weapon States against use or the threat of use”.

“It has been auspicious, with a view to the future, that we achieve a transparent and participatory dialogue to approximate points of view, often opposed, that the states have in different matters on disarmament”, said the Bolivarian diplomat.

He added that the Venezuelan presidency acted constructively trying to listen to everyone’s voice. The conditions have been created so that the future presidencies have the document presented by Venezuela as a reference and this is an advance for future negotiations.

Numerous diplomats took part in the debate, including the ambassadors of Russia, China, Cuba, Iran, Vietnam, Syria, Egypt, Algeria, South Africa and the Democratic People’s Republic of Korea, acknowledged the successful performance of Ambassador Jorge Valero and praised him for his diplomatic expertise

It is worth noting that only the government of Donald Trump, and very few of its docile allied governments, tried to sabotage the Venezuelan presidency. The US Deputy Secretary of State for Armament Control, Yleem Poblete said, at the time the US ambassador assumed its presidency (and to whom Ambassador Jorge Valero succeeded), that his government would prevent at all costs that Venezuela assume the presidency of the CD. The government of the United States failed rudely in its nonsense, since almost all the countries that make up the CD participated constructively and supported the Venezuelan presidency.