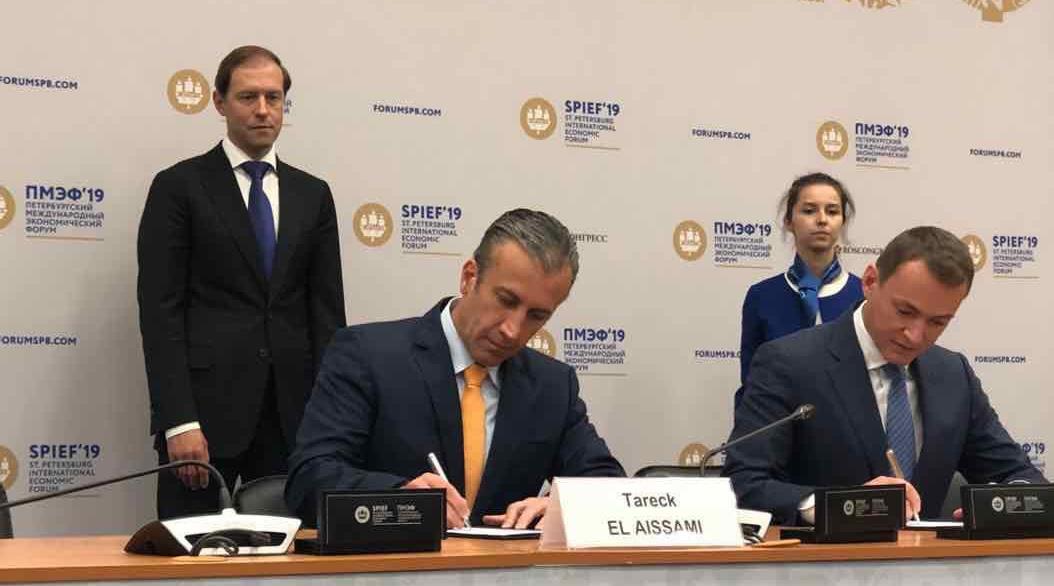 The Vice-president of the Economic Area, Tareck El Aissami announced the materialization of important bilateral cooperation agreements between the Bolivarian Republic of Venezuela and Russia, during the International Economic Forum of St. Petersburg (Spief), held from June 06 to 09.

“We have reached important agreements of bilateral cooperation with the Russian Federation, in the framework of the celebration of the International Economic Forum of St. Petersburg, which ratifies the profound relationship between Russia and Venezuela”.

The Venezuelan representative explained that cooperation in the energy, pharmaceutical, commercial and technical-scientific fields are part of the agenda that was developed in St. Petersburg. “We thank once again the government of the Russian Federation, and President Vladimir Putin for their unconditional support”.

During the International Economic Forum, Venezuela and Russia signed an agreement of strategic commercial pharmaceutical alliance between Espromed Bio and the Geopharma Society, for the supply and production of insulin in Venezuela.

Similarly, El Aissami announced that Venezuela will share the annual headquarters of the Conference of Gas Exporting Countries with Russia.

The Sectoral Vice-president of Economy highlighted that the International Economic Forum of St. Petersburg has led to a debate on the need to seek new balances in the global economy, creating an “Agenda for Sustainable Development”.

In this regard, he said that the position of Russian President Vladimir Putin has been decisive in denouncing the threats of imperialism and the alleged chaos that the US administration is imposing.

“President Putin: The first step is to carry out a kind of demilitarization of basic necessities, medicines and medical equipment, to free them from all types of commercial war and sanctions”, wrote El Aissami on the twitter social network about the intervention of President Putin at the St. Petersburg Forum.

“Also at the International Economic Forum in St. Petersburg, President Vladimir Putin has said that it is necessary “to rethink the role of the dollar, which has become an instrument of pressure and blackmail to the world, on the part of those who issue it”, he precised.

El Aissami stressed that “President Xi Jinping says that China will continue to consolidate multilateral trade and a balanced global economic development, with respect for the sovereignty of the people”.

“We appreciate the everlasting generosity on the part of the Russian government to our delegation; and their support to the people of Venezuela and President Nicolás Maduro. We especially thank the CIAN President, Yuri Borisov, and the Minister of Industry and Commerce of Russia, Denis Manturov” concluded.