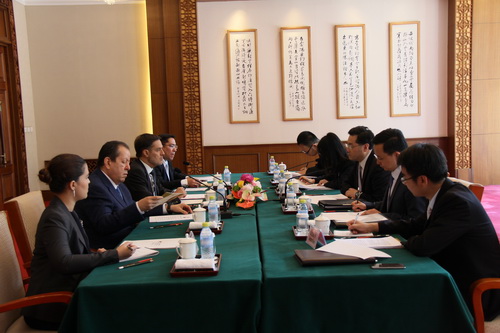 China expresses its solidarity with Venezuela

Vice Mnister of Foreign Affairs Qin Gang met with the Vice-minister of Foreign Relations for Multiletaral Affairs of Venezuela, Felix Plasencia, who visited the country. Both exchanged views in a friendly and comprehensive manner, on issues of relations between China and Venezuela, the situation in Venezuela and others.

Qin Gang said that the Chinese side is following closely the development of the situation in Venezuela and hopes that the Venezuelan problem will be resolved as soon as possible. He also said that his country understands and supports the Venezuelan government’s effort to safeguard the sovereignty, independence and dignity of its nation and that it is willing to continue its efforts to promote peace talks and contribute to the solutions of the Venezuelan people through inclusive dialogues.

For his part, Felix Plasencia thanked China for the support and said that Venezuela attaches great importance to the development of its relations with that nation and believes that the Asian nation will support the just cause of the Venezuelan people as it has always done and will help to safeguard the Peace and tranquility of the region.