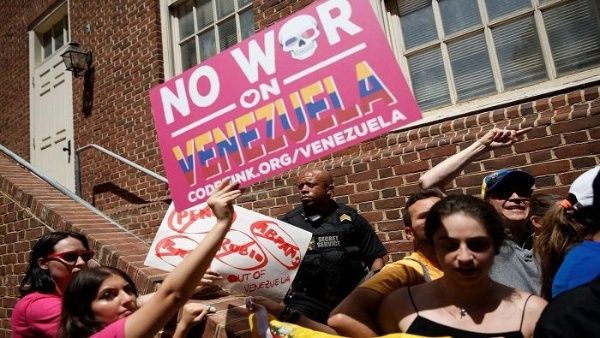 Vice-minister Ron: the violation of international law by the US is a clear threat to the peoples of the world

“The illegal and violent entry by the police of the United States government to the Venezuelan diplomatic headquarters located in Washington demonstrates a clear and open violation of international law without precedent under the Vienna Convention”, said the Vice-minister for North America of the People’s Power Ministry for Foreign Relations, Carlos Ron, on Thursday during a telephone contact with the TeleSur news channel.

“The aggression towards our diplomatic headquarters in Washington by the Trump government is only a small replica of the aggressions and blockades that are being carried out against the Venezuelan people and Government, but in the territory of the United States”, said the diplomat.

On the other hand, Vice-minister Carlos Ron denounced that the violations of international law carried out by the Donald Trump government not only affect Venezuela but “is a clear threat to the peoples of the world”.

In this context, the Venezuelan diplomat confirmed, through his Twitter account, that the irruption in the facilities of the diplomatic headquarters is illegal according to the Vienna Convention.

Let it be clear. The Government of the Bolivarian Republic of Venezuela does not authorize the entrance of any US law enforcement officers into our former Embassy building in Washington. Any such entrance is an unlawful breach of the Vienna Convention.