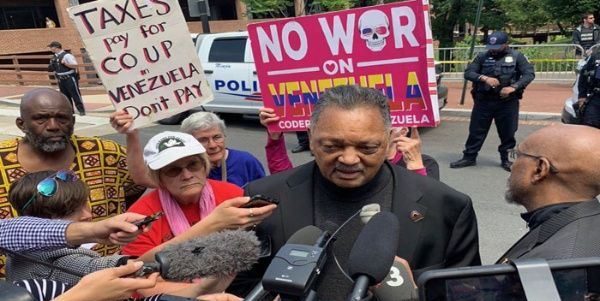 Venezuela thanks the Rev. Jesse Jackson for his support to the protection group of the embassy in Washington

This Wednesday, the Foreign Minister of the Bolivarian Republic of Venezuela, Jorge Arreaza, thanked the American Reverend and civil rights activist, Jesse Jackson, for his humanitarian gesture of delivering food to the Collective of Protection of the Embassy of Venezuela in Washington, which It is besieged by sympathizers of the Venezuelan opposition with support from the US government.

“We thank the Reverend @RevJJackson for his humanitarian and solidarity gesture with the Colectivo de Protectores of our Embassy in Washington and with the People of Venezuela, by demonstrating against the interventions and blockades #TrumpUnblockVenezuela #TrumpDesbloqueaVenezuela”, the Venezuelan Foreign Minister said through his Twitter account @jaarreaza.

The renowned reverend managed to deliver food to US activists who protect the diplomatic headquarters, after a violent resistance and struggle by supporters of the self-proclaimed Juan Guaidó, who were determined to prevent the arrival of food and medicine.

During his visit, Jesse Jackson expressed his solidarity to all the people who try to defend Venezuelan sovereignty and who reject US military intervention as a possible option in the face of the political situation in Venezuela.

He also said he plans to return next Sunday to continue showing his support to the Protection Collective and to all those who oppose the illegal takeover of the Venezuelan Embassy and the coup d’état in Venezuela.

At Venezuelan embassy in Georgetown, Jesse Jackson expressing his solidarity with people opposed to US intervention in Venezuela pic.twitter.com/UBog3FEpiy