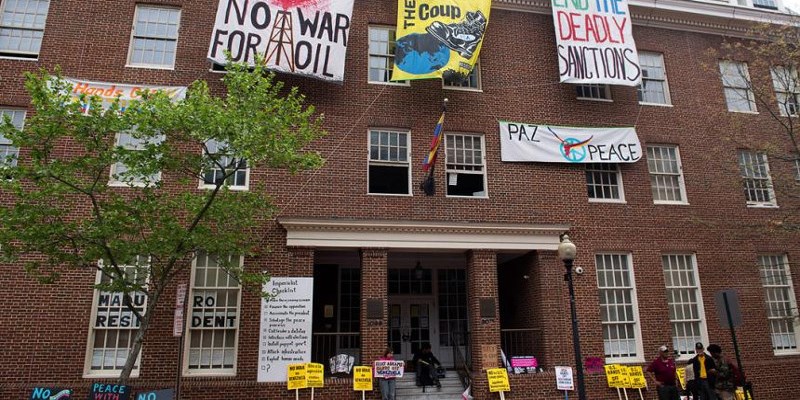 The Foreign Minister of the Bolivarian Republic of Venezuela, Jorge Arreaza, demanded that the United States Department of State comply with the Vienna Convention on Diplomatic Relations and protect the Venezuelan diplomatic premises in Washington, which served as the Embassy until the moment of the rupture of Relations between the two countries.

As this international agreement establishes in Article 45, in the event of the rupture of diplomatic relations between two States, or if a mission is terminated definitively or temporarily, the receiving State will be obliged to respect and protect, even in case of armed conflict, the premises of the mission as well as its assets and archives.

“Our recognition of the dignity and firmness of the Protective Collective of our former US Embassy. They besiege, assault, block and even cut off electricity. Does not it sound familiar to you? It is the same illegal strategy of imperialism against the Venezuelan people”, Minister Arreaza posted on his Twitter account @jaarreaza, after the violence that occurred outside the Venezuelan diplomatic post in Washington on Wednesday night.

For several days, representatives of various US social movements have been besieged by a mob of Venezuelan oppositors who intend to raid the Embassy, ​​even in the presence of the police authorities of that nation.

The Secret Service of the United States, meanwhile, practiced the forced detention on Wednesday of Gerry Condon, president of the American association Veterans for Peace, who was recently in Caracas in solidarity with the Venezuelan Government before the policies of the White House against the South American country.

The practices of the Venezuelan oppositors in Washington emulate unequivocally the siege against the Embassy of the Republic of Cuba during the April 2002 coup against the government of then President Hugo Chávez.