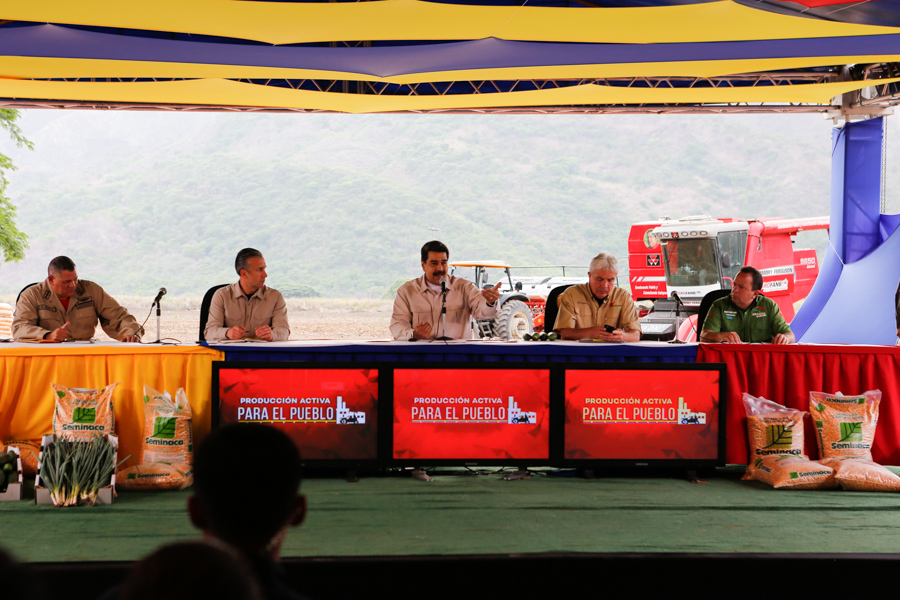 US financial blockade will be defeated with national production

In the framework of the national productive mechanism, the President of the Bolivarian Republic of Venezuela, Nicolás Maduro Moros, continues to promote the financing of small and large producers throughout Venezuela, with the aim of breaking the economic and food siege that attempts to destabilize the country.

About this initiative the head of state, through a television link, made delivery of seeds and inputs to producers in the Portuguesa state, where 1,354 small farms (conucos) were benefited in order to ensure the production of priority items for that region.

During his visit to the Agricultural Production Unit ”Gran Cacique Yare”, located in the La Placera sector, Girardot municipality of Aragua state, the Dignitary also announced the reactivation of the”Chaguaramas” precooked corn flour processing plant, which is located in Guárico state, which will have a production capacity of 30 tons per day of this item, as reported by José Vásquez, governor of the state, who assured that in order to guarantee the raw material for the company, a plan was stablished for sowing 2,500 hectares of corn from the producers of the area.

In compliance with the same production plan in the Revenga municipality, Aragua state, the seed plan was initiated, in coordination with the Guaracarima commune, where -in its first phase- 40 thousand kilos of corn seeds will be planted in 2,000 hectares, for a projection of seeds that can later cultivate 200 thousand hectares of this item.

On the other hand, the Loma de Níquel mine, located between the Miranda and Aragua states, was reactivated, where a ferronickel recovery plant was installed from a mixture of metallic oxides, which produces about 3,000 tons of this mineral.

This reactivation was achieved thanks to an investment of 3.2 million euros and it is expected to generate a profit for the State of 9.6 million euros.