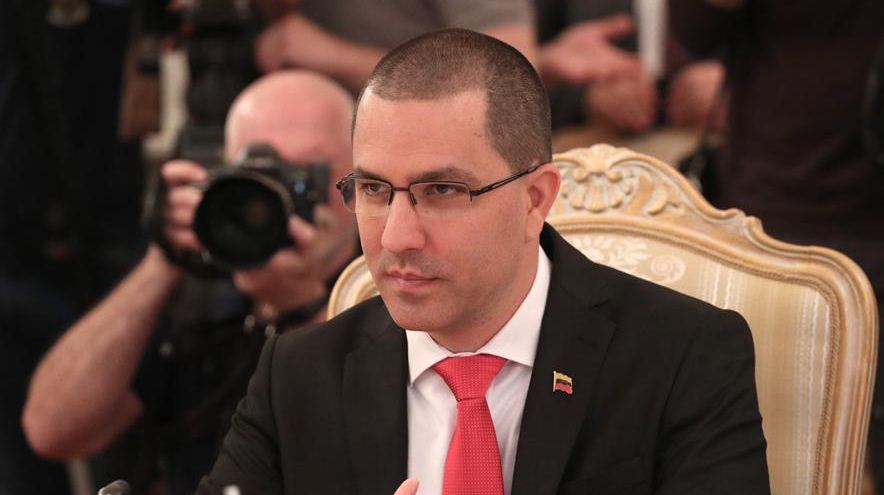 Foreign Minister Arreaza: Where does the UN Charter establishes that a unilateral war is legal?

Venezuelan People’s Power Minister for Foreign Relations, Jorge Arreaza, granted an exclusive interview to RT on Monday explaining the origin of the coup attempts in Venezuela, pointing out the complicity of several Latin American governments in this regard, he also recalled the importance of Russian-Chinese mediation in the crisis, he describes a feeling of “despair” and “frustration” among the Venezuelan opponents and refutes the legality of any hostility against Caracas.

The Venezuelan People’s Power Minister for Foreign Relations, Jorge Arreaza, has expressed from Moscow the certainty that his country will counteract the current international pressures and will face until the end any potential hostility on the part of the United States and its allies.

In an interview with RT, Arreaza has dismissed the US accusations that Venezuela is on the wrong side. “I am on the right side not only of history, but of the future […] we are willing to give our lives to defend this version of history, to defend our truth”, said the FM.

At the same time, Arreaza affirms that the current situation in Venezuela is actually “a coup that has been going on for almost 20 years” and that it is characterized by a failed conspiracy between the “American empire and the Venezuelan bourgeoisie” to regain control of the resources of the country.

Specifically, Arreaza referred to the opposition leader Leopoldo López, claiming that his alleged release from house arrest days ago was nothing more than a flight. “He fled.” Instead of bravely planting and leading a process in which [opponents] claim to believe, he takes refuge in one embassy or another”, he said.

The Foreign Minister explains that this has only increased frustration among the opposition, while the Venezuelan people have behaved “worth to the task”, despite the days we had to suffer without energy or provisions after the multiple attacks received in the Venezuelan electrical system.

“They are obsessed, desperated, but there is a firm people, and a strong Bolivarian National Armed Force, and they will continue in one failure after another, in frustration after another, and we will keep looking for the future”, the diplomat said.

According to Arreaza, the current situation points to the need for a new type of political participation. “We need a truly Venezuelan, nationalist opposition, independent from the US, with different thinking, that confronts us, in the field of ideas, that confronts us in the electoral field”, the diplomat said.

A stop to the imperialist madness

The Foreign Minister has emphasized that this “pattern” of destabilization – which has failed to threaten the democratically elected Government – comes from Washington, whose current position of sanctions and threats of intervention “is the most illegal thing that exists”.

“Where does [the UN Charter] establishes that there is a unilateral war that can be legal? Nowhere, but they do not respect international law”, he said.

The diplomat stressed that it is respect for the law what differentiates the status of the world power of Moscow and Beijing from that of Washington. “We must stop the imperialist madness, and Russia and China, which are great counterweights in the concert of nations, are called to fulfill that role and are fulfilling it”, he said.

Along the same lines, Arreaza condemned the US tendency to point out the cooperation between Caracas, Moscow, Beijing and other allies as undue. “Nobody can come to tell neither Venezuela nor any other country in the world with whom to establish relations and with whom not”, he said.

Compete to see who is attacking Venezuela the most

On the other hand, the minister described as “impressive” how Latin American leaders such as Colombia and Chile compete “among themselves to see which of the two is loved the most” by the US president, Donald Trump, “who is like their entrepreneur political chief”.

“Then they compete to see who is attacking Venezuela the most, who emits more hatred towards Venezuela […] so that [Trump] recognizes them a little more and promotes them”, Arreaza said. “They are trying to convert Latin America into an US company and it is not going to be allowed, the people will not allow it”, he added.

However, the diplomat hopes that Trump will not give any military order against Venezuela – “which is not a threat for anything or anyone at all” – and ignore the advice of his “warmongering” advisers. He also expressed the hope that the opposition will give way to dialogue, even though their leadership is “kidnapped by these hawks”.

In that sense, the FM stressed that the key could not be the US National Security Advisor, John Bolton, but the US Secretary of State, Mike Pompeo. “I am sure that Mr. Pompeo has the capacity for reflection to be able to establish a new approach strategy with Venezuela”, Arreaza said before the meeting that will take place on Monday between the US official and Russian Foreign Minister Sergey Lavrov.