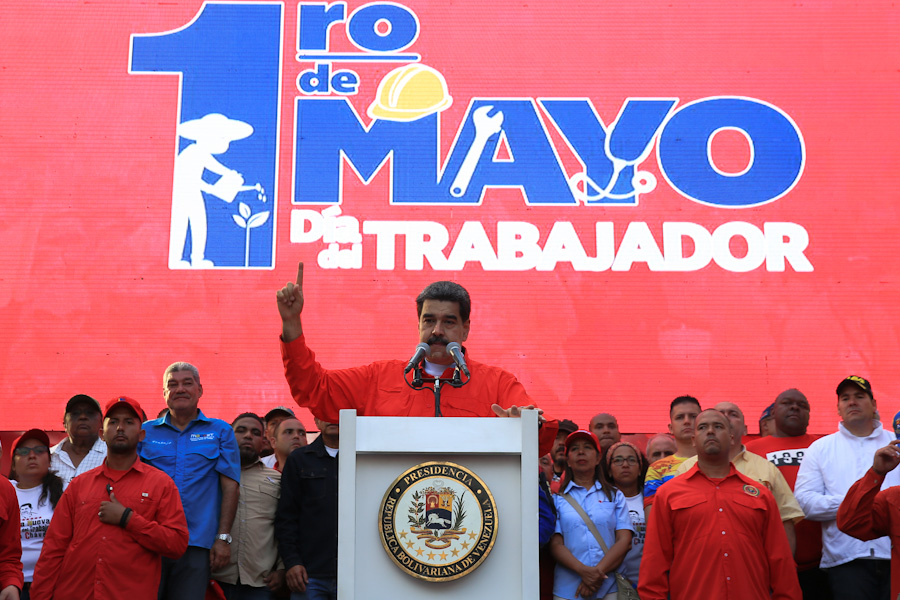 President Maduro: Today is the day of the heroic working class who have defeated a new coup

Assuming its leading role, the working class mobilized with joy this Wednesday, May 1st, on the workers’ day and in support of the Constitutional President of the Bolivarian Republic of Venezuela, Nicolás Maduro Moros.

The concentration that began on the Valle-Coche Highway at the Longaray Distributor in Caracas with destination to the city center, was propitious for the Head of State to highlight the presence of the working forces and the Venezuelan people in defense of their demands and their absolute commitment to defend the homeland and the Bolivarian revolution in the streets

“May 1 is the international worker homeland’s day, the day of world socialism, the day of the heroic working class of Venezuela who have defeated a coup once again (…) this May 1, has been filled with people like never before, from early hours in the morning with a mobilization that has covered all of the Caracas highways until reaching Miraflores”, said the National President during his participation in the popular rally at the Miraflores Palace.

He also stressed that “this march is one of the largest (…) is a monumental march”, said the Head of State, who noted that the massive mobilization gets this time a greater significance to be a day after a new coup attempt against the the constitutional government by the extreme right.

During his speech, the president affirmed that justice will be done in front of those who promoted the attempted coup on Tuesday, who tried to impose themselves with deceit, lies and manipulation on a small group of young officers and troop personnel of the Bolivarian National Armed Force (FANB) to attempt against the constitutional order.

“We just defeated a new plot of the right-wing. Yesterday, they tried to impose themselves trhough treason, I have the evidence in my hands and justice is looking for them and sooner or later they will go to jail to pay their treason and their crime”, the president said. .

The Venezuelan president also reported that in the coming days he will reveal to the country and the world all the evidence about the factors of the extreme right promoted by the US government that perpetrated the coup attempt.

“In the coming days I will show all the evidence of who conspired, who betrayed, how he betrayed and then, let justice does its part (…) I swore to respect and enforce the Constitution, laws, the right to peace and democracy and to the freedom for all the people of Venezuela”, said the head of state.

Similarly, the President took the opportunity to denounce the Security Adviser of the United States Government, John Bolton, for leading the maneuvers of the failed coup.

He added that the civic-military union is loyal to the Homeland and to the workers.

Likewise, the National President urged the workers, their government team, as well as organized popular forces to keep advancing in the process of economic recovery through production. And he also called for next weekend a great national day for dialogue, consultation, action and raising of proposals through the Bolivarian Congress of Peoples.