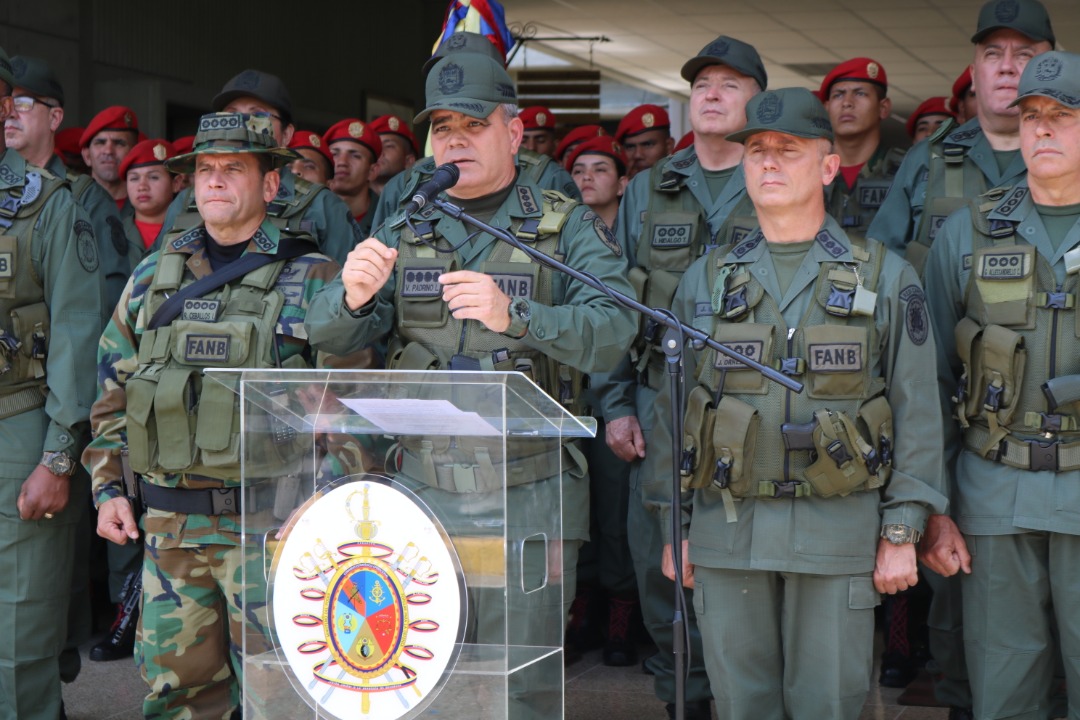 Vladimir Padrino López: We will not allow any aggression against the institutions, democracy and the Constitution

In frank repudiation of the new coup attempt against the constitutional government of the president of the Bolivarian Republic of Venezuela, Commander in Chief Nicolás Maduro Moros, this Tuesday, April 30, from the Caracas Battalion located in Fort Tiuna, the General in Chief Vladimir Padrino López, Sectoral Vice President of Political, Security and Peace Sovereignty and People’s Power Minister for Defense, in the company of the Superior General Staff of the Bolivarian National Armed Forces (FANB), reaffirmed loyalty to the Constitution, laws of the Republic, institutions, legitimate authorities and the people of Venezuela.

The holder of the military portfolio expressed “This is an act that we can qualify as a terrorist, because to arm some war gear on a public high trafic road, to set a group of armed men and hijacked vehicles of our Bolivarian National Guard, with machine guns, assault rifles and pistols, it is a cowardly act that borders on an attempted coup d’etat -by the way- of a very small, mediocre and insignificant magnitude”.

He said “Faced with this shameful fact, all the Commanders of the FANB have given an immediate response; for that reason, all Components Commanders, of operative units, tactical units, Integral Defense Strategic Regions (REDI), Integral Defense Operative Zones (ZODI), Bolivarian Militia, were reported and placed at the head of their troops to reject this rogue , this vile, crude maneuver, which covers with violence, insanity and intolerance”.

Defense of the Constitution

Referring to the constitutional mission of the FANB, the General in Chief assured that “The men-at-arms reaffirm our eminently patriotic, Bolivarian and anti-imperialist character. For this reason, we reject outright this new aggression by US imperialism and its lackeys here in Venezuela”.

He added “We will not allow any aggression against the law, institutionality, democracy and the Constitution. The arms of the Republic are to defend its sovereignty and independence. And these hearts and this consciousness that shines and reigns in the FANB, will always be one, with only one horizon: Freedom, justice, equality, participative and protagonist democracy, and the humanist principles that the Constitution gathers. And if we have to use weapons to defend these principles, we will use them”.

During his pronouncement, Padrino López said “This act is looking for a bloodshed in the streets of Caracas. We hold all that fascist and anti-patriotic leadership that does not deserve the respect of Venezuelans or the FANB responsible for any act of violence or death”.

He emphasized “We make you responsible (extremist opposition) for any act of violence, chaos and death that from this moment is generated in Venezuela. It is you who are favoring coups, trying to divide the FANB”.

Who arrives at Miraflores?

The General in Chief recalled the constitutional text by pointing out that sovereignty resides intransferibly in the people. From there, his energic assertion “Miraflores is not reached by violence. Anyone who arrives in Miraflores because of violence will be overthrown by violence (…) There is a quite important touch of irrationality in the political opposition of Venezuela today. It is a coup opposition, savage, devoid of sense of homeland, undemocratic. If you want to earn the respect of the FANB, stop playing games. Do not believe that you are dealing with children here. Do not underestimate us”.

Finally, he said “This act of violence that threatens the peace and tranquility of the citizenry has been defeated”.