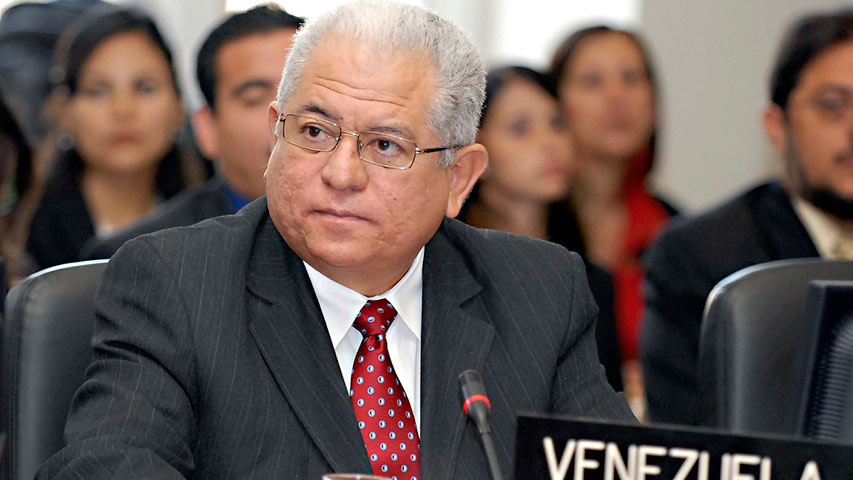 Jorge Valero: Withdrawal of the OAS is supreme example of national dignity

This Saturday Venezuela makes effective its withdrawal from the Organization of American States (OAS), a fact that constitutes a “supreme example of national dignity”, said Ambassador Jorge Valero, permanent representative of Venezuela to the United Nations (UN), in Geneva, Switzerland.

The ambassador pointed out that the country abandons this Organization because it is subordinated to the interests of the United States government, so it is necessary that there be progressive changes in the correlation of forces in the hemisphere.

“Our country does not accept mandates emanating from the government of Donald Trump that violate its sovereignty, facing the snares of the most warlike imperialism in history, Venezuela will continue to raise the banners of independence and self-determination”, Valero said, in an exclusive interview for the Venezuelan Agency of News (AVN).

He said that the OAS has always responded to imperial interests, although on previous occasions, the secretaries general of the international organization maintained a certain equanimity and synderesis, something that does not happen with Luis Almagro, who has held this position since 2015.

“He has lost his shame, he is a mercenary and he does not hide it, his hatred towards Venezuela and its authorities is irrational”, he denounced.

Valero stressed that the departure from Venezuela is official, despite the fact that the OAS “recognized” Gustavo Tarre, sent by the National Assembly in contempt, as a representative of Venezuela, which he considers “is compatible with the vassal nature of the OAS”.

He stressed that the resolution with which they intend to give legitimacy to the incorporation of Gustavo Tarre is illegal, because it is subscribed only by 18 countries of the 33 that make up the body.

“To ignore the representation of a State is necessary to produce a Resolution of the General Assembly of the OAS, a resolution approved by the Ministers of Foreign Affairs and approved by two thirds of its members”, he said, while recalling that is why “almost all the CARICOM countries spoke out against this aberrant, illegal and infamous resolution”.

On the other hand, the ambassador defended that Venezuela, from the Government of Hugo Chavez, proposed to generate changes in the performance of the Organization of American States, and assured that the commander provoked a political schism in the system of neoliberal domination that reigned in that historical time, however, there has been an imperial counter-offensive.

Despite his departure from the OAS, Venezuela will continue to influence the community of nations, he said, as an example for the States that seek their emancipation from US imperialism.

“Venezuela is a fundamental axis of planetary political confrontations.Today, the whole World speaks and discusses about Venezuela. If the Bolivarian Revolution triumphs, as is to be expected, the best causes of the human species will triumph in this historical time”, he said.

Likewise, Valero made reference to the continuity of Venezuela in other multilateral organizations such as the UN, highlighting the great structural differences it maintains with the OAS.

“The membership of Venezuela in the UN is absolutely guaranteed, the OAS is a Ministry of Colonies of the United States, the UN is more plural, diverse and independent, there the NAM works, in the OAS the empire imposes its law. There is a constellation of sovereign countries in the UN that prevent the US from doing their will freely”, the official explained.