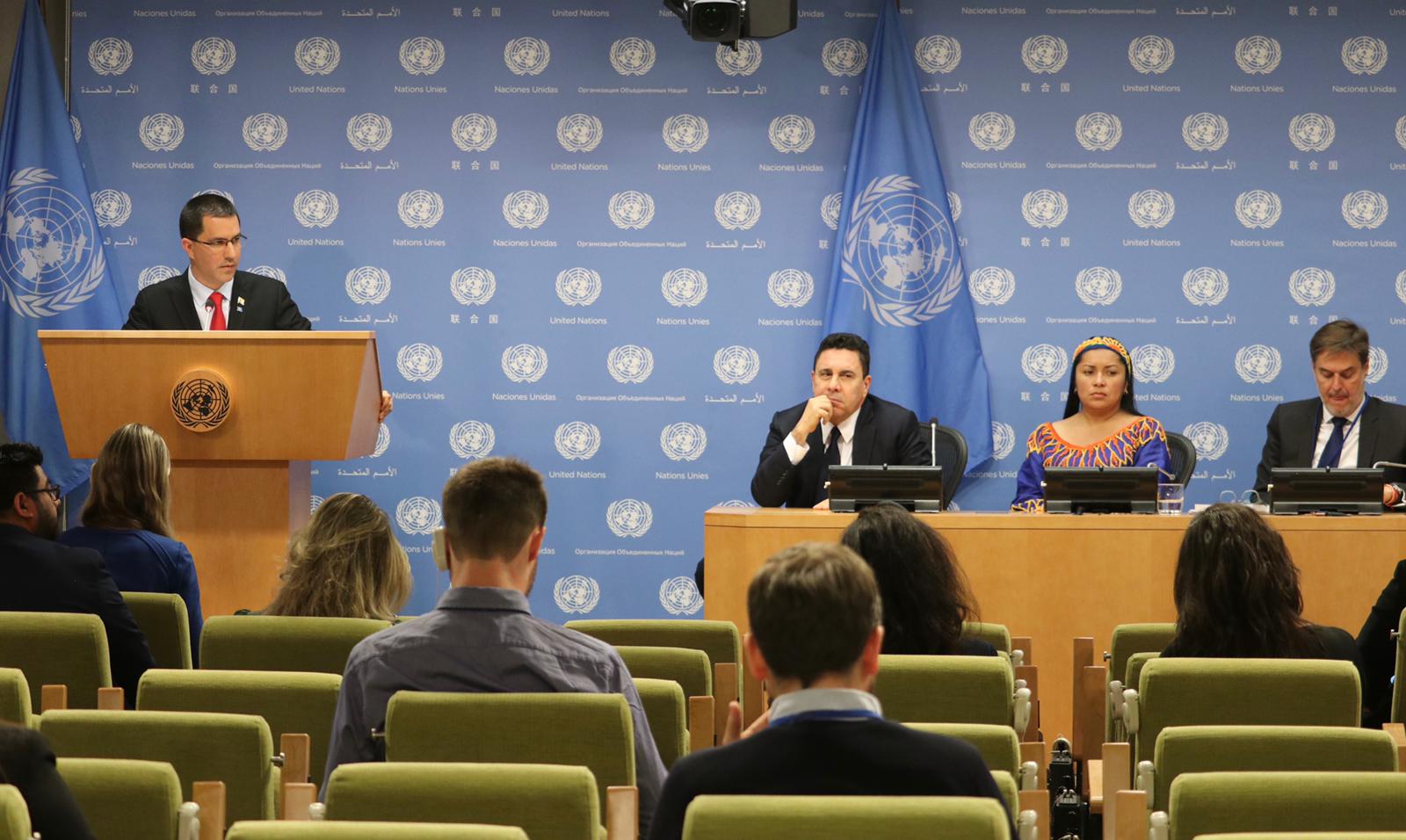 The unilateral and coercive sanctions initiated by the government of former US President Barack Obama and intensified by the current administration of Donald Trump, has generated devastating effects on the people of Venezuela to such an extent that it threatens the lives of thousands of citizens motivated by the economic blockade that makes it impossible to the Venezuelan State to acquire raw materials, food and medical supplies, denounced the Foreign Minister of the Bolivarian Republic of Venezuela, Jorge Arreaza, during a press conference at the UN, New York.

This economic blockade aggravates the situation of at least 26 Venezuelan patients who are in Italy and who require bone marrow transplantation, and who are about to lose their lives as the Venezuelan State has not been able to meet the payment of almost five thousand million euros for medical care, which were made through Citgo, Venezuelan oil company that was seized by the US.

“The people are suffering the effects of the blockade, there is deep social involvement to make the world believe that the model of Bolivarian Socialism had failed”, he said.

The Foreign Minister declared that an “information war, a diplomatic war” has been undertaken, to which tangible aggressions have been added, such as the financing of violence and the mounting of parallel governments that seek to overthrow the constitutional government of Venezuela.

Those actions, according to Minister Arreaza, are part of the “cruel and criminal aggression” that the US supremacy seeks to impose on the world through its unilateral policy, which seeks to disrespect the sovereignty and democracy of countries that do not agree the interests of the United States.

“We declare ourselves in campaign so that the world knows the consequences of the unilateral blockade of the government of the United States on Venezuela, consequences that have claimed the lives of thousands of Venezuelans”, he said.

Other routes used by the United States to attack the Venezuelan people is the offensive against the national public bank which can not be used for the purchase of inputs and imports, nor use the dollar for the different transactions, reason why the FM said they have had to migrate to other currencies such as the Euro and the Yuan.

“The assets of the Bolivarian Republic of Venezuela have been affected in a substantial way, closing the bank accounts, keeping the money in. There is an offensive against Venezuela, the Central Bank of Venezuela is attacked so that we can not comply with the importation of products for the welfare of the people”, he said.

Similarly, the Venezuelan Foreign Minister denounced the theft that is being committed against the assets of Venezuela that are abroad, equivalent to five billion euros that are being frozen by Citibank, Novo Bank, Bank of England, North Capital Bank among other financial institutions.

Likewise, the Venezuelan diplomat announced that President Nicolás Maduro will announce in the coming days the creation of a registry to keep track of the affectation that the Venezuelan people have suffered motivated by the economic blockade imposed by Donald Trump.

Finally, the diplomat thanked the Group of Countries in defense of the United Nations Charter in its fight “to stop abrupt regime changes, protect international law, confront the economic blockade in the best way”.