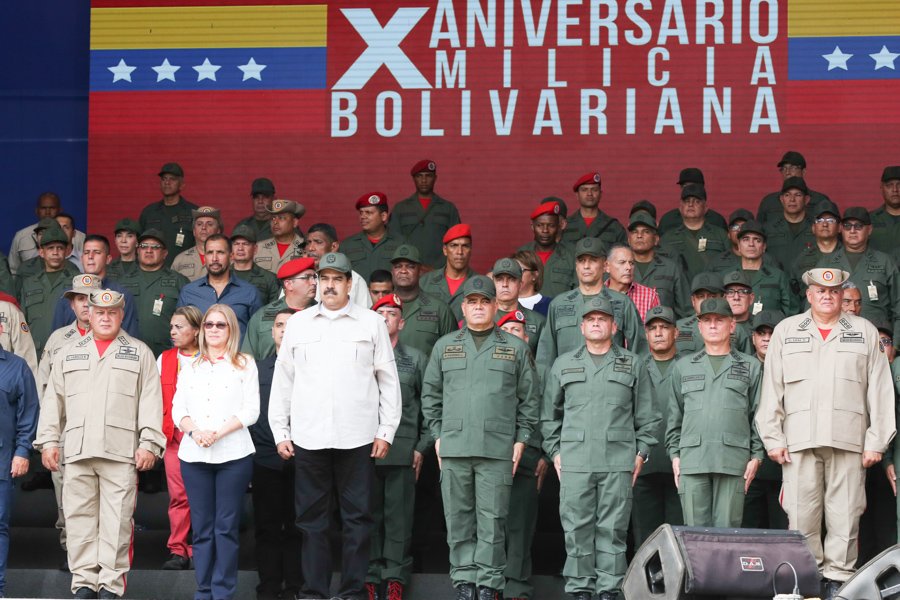 17 years after the popular rebellion, the Venezuelan people commemorate the National Day of Dignity

After 17 years of the rescue of dignity, the people of Venezuela remain firm in the determination to be a sovereign people, that is why the Head of State and Government, Nicolás Maduro Moros, arrived at the monumental avenue Los Próceres, in the city of Caracas to celebrate together with the rebellious people the seventeenth anniversary of the Bolivarian National Militia.

A rebel people that did not allow anyone to steal their democracy, sovereignty, and their leader President Hugo Chávez Frías, who was kidnapped on April 12, 2002, after a national strike called by Fedecamaras along with military traitors to the Homeland who sought to defeat the legally constituted government.

Before the coup d’état against Commander Chávez, the people’s power took the streets to defend the Bolivarian Revolution, to demand the restitution of the constitutional thread and the liberation of the Venezuelan leader.

Today the people of Venezuela continue to reaffirm their rejection of the interference and the coup that besieges the nation and raise their voice to express their desire for peace, support for the Bolivarian Revolution and President Maduro as they did on April 13 of the year 2002

Civic-military union holds the real reins of the Homeland

The President of the Bolivarian Republic of Venezuela, Nicolás Maduro Moros, affirmed that the civic-military union carries the true reins of the Homeland in the construction of the path towards the Bolivarian Socialism of the 21st century.

“The reins of the Homeland are carried by millions of men and women of the people who trully own this country, this land, this great story that we are writing”, Maduro said.

During his participation in the commemoration of the National Day of Dignity and anniversary of the Bolivarian Militia, celebrated in the monumental promenade Los Próceres, in Caracas, Maduro stressed that the Bolivarian Revolution has had to face a battle that brings all forms of imperialists wars with it; even though, the path of socialism of the XXI century remains very clear.

“Our path is very clear, the point where we came from, the historical strength that runs through our veins and the current struggle, is very clear”, he emphasized.

He also assured that 17 years after the 2002 coup, the people, together with the constitutional government of the Republic, have consolidated a path based on constitutionality, legality and participatory democracy with broad political and civil liberties.

Extremist Right persists in its eagerness to dismember the Homeland

“National actors, in the field of the right-wing, are practically the same throughout these 17 years and these days they continue to pretend to tear down the country, dismember the Homeland and impose a coup government that delivers our wealth to the US government”.

Those were the words of the constitutional president of the Republic, Nicolás Maduro Moros, during the commemoration of the National Day of Dignity and the anniversary of the Bolivarian Militia, celebrated in the monumental promenade Los Próceres, in the city of Caracas.

The head of state recalled that 17 years ago the Venezuelan right-wing played a similar role to the one they are currently trying to impose, when they captured the commander Hugo Chavez and from the Miraflores Palace, they imposed Pedro Carmona Estanga as de facto president, breaking all laws of the Republic.

In this regard, the Dignitary pointed out that the oligarchy, like today, forgot that there was a conscious people willing to fight, a Bolivarian National Armed Forces sown in Bolivarian and revolutionary values.

“Today 17 years ago the people decided in favor of the history of our country, together with the Armed Forces in that dawn of patriotic resurrection was decreed a national, popular, civic-military insurrection to rescue the constitution, President Chávez and to defeat the coup of April 11”.

President Maduro emphasized that this historic date will be remembered by future generations, for the heroic deed that the people held along with the military forces recovering the constitutional thread of the Nation.