The Bolivarian Republic of Venezuela continues to diversify its international relations on the basis of respect for international law and the purposes and principles of the Charter of the United Nations, said Monday the People’s Power Minister for Foreign Relations, Jorge Arreaza.

At a press conference, the Venezuelan Foreign Minister offered a broad and detailed account of the tour that recently took him to South Africa, Namibia, Turkey, Lebanon and Syria, where he held a series of meetings at the highest level with the vision of expanding bilateral and multilateral ties.

Of this journey, he highlighted his attendance at the Conference of Solidarity with the Sahrawi Arab Republic that took place in Pretoria, location where he met with a group of presidents and chancellors -among other representatives- of various African countries and other regions of the planet.

South Africa: the start of the tour

In the context of the Conference of Solidarity with the Sahrawi Arab Republic, FM Arreaza held an important meeting with the President of South Africa, Cyril Ramaphosa, who sent a greeting to his Venezuelan counterpart Nicolás Maduro.

With this southern African country, areas of cooperation in mining, agriculture and medicine were explored, said the Venezuelan Foreign Minister in his meeting with the media.

Regard this, he announced the upcoming visit of a Venezuelan delegation to South Africa, with the aim of designing the future to be followed between the parties.

In this regard, he explained that the meetings dealt with issues related to economy, production and agriculture.

The Venezuelan Foreign Minister also met in Pretoria with the Minister of Local Governments of Seychelles, Macsuzy Mondon, and the Prime Minister of the Kingdom of Lesotho, Tom Thabane.

After fulfilling his agenda in South Africa, the Venezuelan diplomat traveled to Namibia where he was received by the president of this country, Hage G. Geingob.

The meeting gave rise to a strategic dialogue between the parties, during which the map of bilateral cooperation was reviewed.

Foreign Minister Arreaza thanked the Namibian Executive and the Southern African Development Community (SADC) for their support for peace, international law and to President Nicolás Maduro.

On his visit to the Republic of Turkey, the Minister of Foreign Relations of Venezuela highlighted the meeting he held with his Turkish counterpart, Mevlüt Çavuşoğlum, in which both diplomats reviewed the multilateral and bilateral cooperation ties in different sectors.

“Nothing and nobody can prevent the links between Venezuela and Turkey to diversify and deepen”, he said then.

And on Monday, he informed that Caracas and Ankara will expand the strategic alliance of bilateral cooperation, especially in the financial and commercial spheres, as well as in the air interconnection.

After passing through Turkey, the Venezuelan diplomat traveled to the Lebanese Republic and was received in Beirut by President Michel Aoun and by the Minister of Foreign Affairs and Migrants, Gebran Bassil.

Foreign Minsiter Jorge Arreaza made particular reference to the visit to the Syrian Arab Republic, which marked the end of the journey, where he held an important meeting with the president of that nation, Bashar al-Ásad.

“It was a real pride for us to visit that land of brave people”, he emphasized and condemned the terrorism that was fomented from abroad to this Middle East country.

The Venezuelan diplomat announced, in this framework, the creation of a Syrian-Venezuelan Business Council, through which a commercial exchange that includes the pharmaceutical sector is estimated.

“The big balance of the tour is, in concrete terms, to be able to satisfy the needs of the Venezuelan people and the peoples with whom we are establishing agreements and businesses, and to be able to advance quickly in a great diplomacy that is not only political, it even goes beyond the commercial, it is an comprehensive economic diplomacy”, he added.

The Venezuelan Foreign Minister also ratified the National Executive’s willingness to establish a new dialogue mechanism with sectors of the opposition that allows a serene solution to the current situation in the country, and once again welcomed the initiative of the Montevideo Mechanism promoted by Mexico, Uruguay and the Caribbean Community (Caricom).

On the other hand, he reiterated his rejection of the unilateral coercive measures imposed by the United States Government on the Bolivarian Republic of Venezuela, which flagrantly violate international law and the Charter of the United Nations.

“No country has the legal authority, and less the United States has a moral authority to sanction Venezuela”, he added. 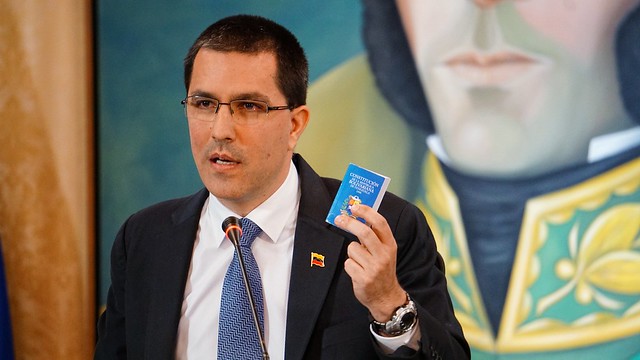