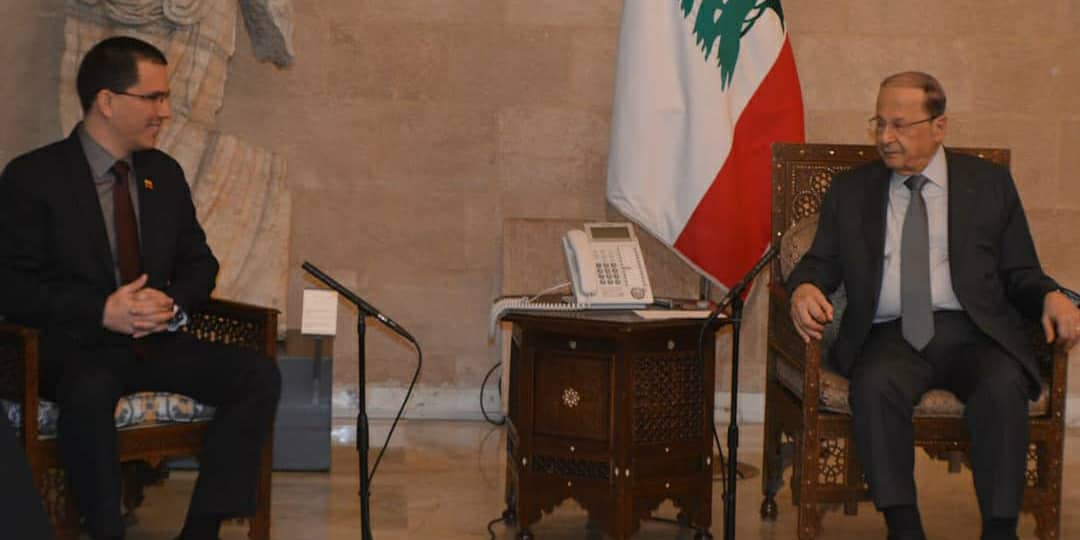 Foreign Minister Jorge Arreaza with the firm intention of strengthening the historical and cultural ties between Lebanese  Republic and Venezuela, held a meeting with the president of that country, Michel Aoun and with the Minister of Foreign Affairs and Migrants, Gebran Bassil.

This meeting that took place in Beirut, capital of Lebanon, is part of the work tour carried out by the Venezuelan Diplomat, which aims to evaluate cooperation projects, common areas between both nations and strengthen multilateral policy that allows the expansion of reciprocity and mutual aid between peoples.

Through his Twitter account, FM Jorge Arreaza, showed part of the meeting he held with President Aoun, the occasion was favorable to acknowledge their hospitable reception and position regarding the international law before the political situation and economic crisis that Venezuela is going through as a result of the unilateral sanctions imposed by the Trump administration.

“We thank the President of the Lebanese Republic @General_Aoun for receiving us in Beirut and expressing his respect for International Law and his greeting to the President @NicolasMaduro. The peoples of Venezuela and Lebanon will continue to cultivate our strong historical and cultural ties”, the Minister said.

After being received by the officials of the presidency of Lebanon, FM Arreaza had a conversation with the head of State Aoun to whom he expressed the affection and gratitude of the Venezuelan people towards the Lebanese people.

“You know the love of the Bolivarian Revolution of Commander Chávez and President Nicolás Maduro for the Arab peoples, for their history, their present and future”, said Arreaza.

After completing this visit, the Venezuelan official offered a brief interview to local media to whom he explained the relevance of relations between Venezuela and the Lebanese Republic to enhance the development of both nations as well as the respect of this country to international law against the claims of some governments to hinder the sovereignty and self-determination of peoples.

“Lebanon is an independent country that respects international law and multilateralism and we keep that in mind. We have great potential for cooperation, for commercial exchange, for energy consulting from Venezuela, it is now when we are going to open a new stage in relations with Lebanon”, he said.