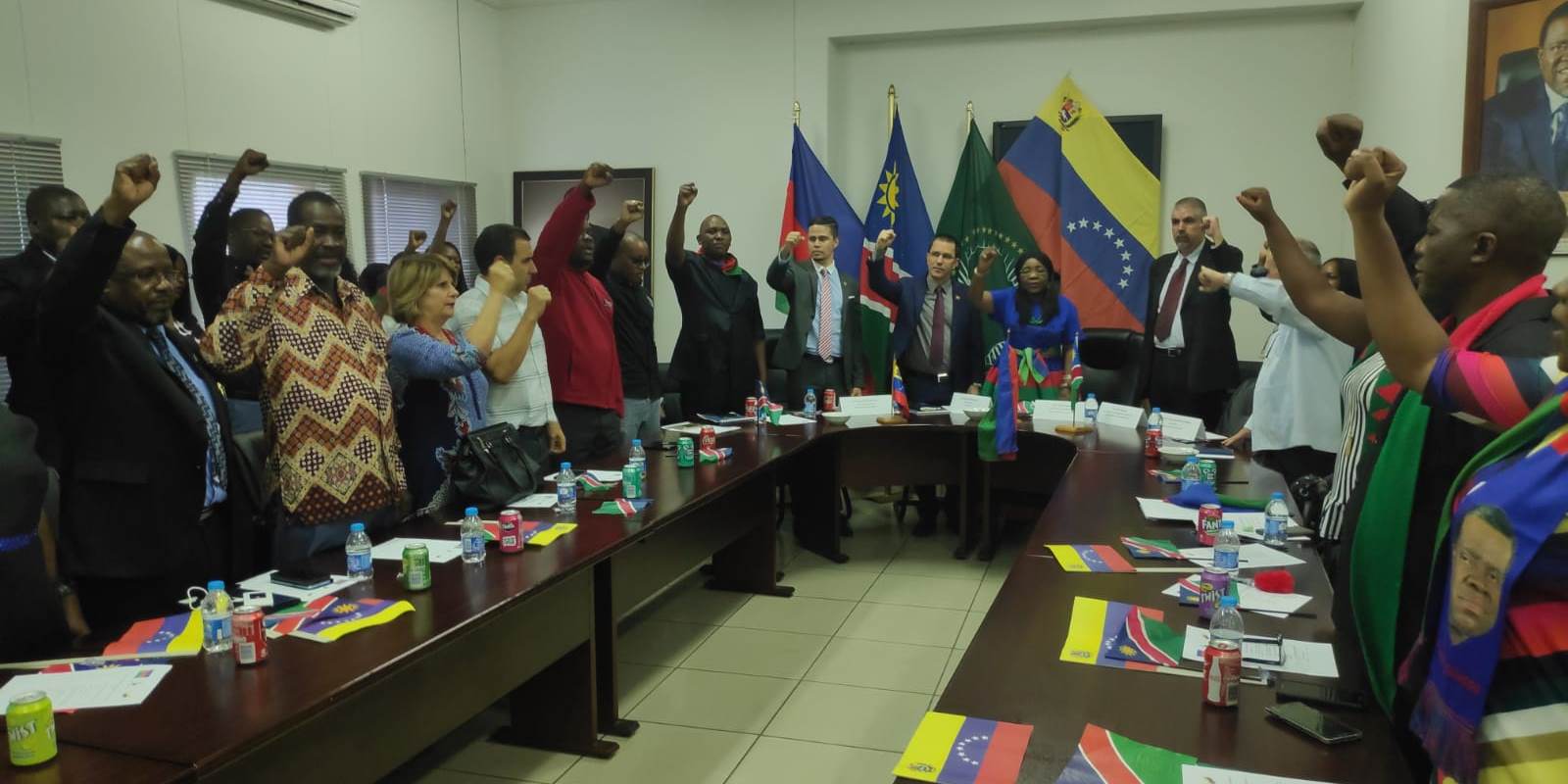 People of Namibia show their support for Venezuela in solidarity assembly

An assembly of solidarity with the Bolivarian Republic of Venezuela was held on Thursday at the national headquarters of the Swapo Party (Organization of the People of South West Africa) in Windhoek, the capital of the Republic of Namibia, where the Venezuelan Foreign Minister, Jorge Arreaza, fulfilled an important diplomatic agenda.

During the event, which brought together historical combatants of the Namibian Liberation War, members of the national leadership and Swapo militants; the secretary general of this organization, Sophia Shaningwa, read and delivered the manifesto of the Assembly of Solidarity of Namibia with Venezuela.

The Namibian political leader recognized in her speech the leadership of President Nicolás Maduro and his efforts to guarantee the territorial integrity of Venezuela, in the face of threats from the United States government.

“Our party declares itself in permanent mobilization to support the Venezuelan people. They were with us in our hour of need (…) Now and always we will be with you”, said the general secretary of Swapo.

Lucia Ilipumbo, Deputy Minister of Industrialization of Namibia, praised the permanent mobilization of the Venezuelan people in defense of the sovereignty and independence of the Latin American country.

“I visited Venezuela at the World Youth Festival and I found a people mobilized for its sovereignty and independence”, said the official, referring to the World Festival of Youth and Students that was held in Caracas in 2005 with youth from all over the world.

Meanwhile, the Minister of Justice of Namibia, Sacky Shanghala, paid tribute to the memory of the Liberator Simón Bolívar.

“When I met Bolívar, I knew what leadership is: as long as the leadership remains firm and united, Venezuela will remain free”, he said.

In this context, Foreign Minister Arreaza denounced the interventionist policy maintained by the United States government against Venezuela.

Simultaneously, he stressed the importance of his visit to the African nation in order to expand bilateral ties.

“With our visit to Namibia a new chapter opens up in our cooperation, to take it to a higher level. Our experience in Venezuela is at your disposal and we know that we have the support of the people of Namibia”, said the diplomat.

He added that Commander Hugo Chávez declared in 2004 that “the Bolivarian Revolution is anti-imperialist and was the first president of Latin America to criticize the wars in Iraq and Afghanistan, which the United States never forgave him”.

The Vice-minister for Africa of the People’s Power Ministry for Foreign Relations, Yuri Pimentel, evoked – for his part – a fragment of the letter addressed by Commander Hugo Chávez to the III South America-Africa Summit (ASA), which took place in the Republic of Equatorial Guinea in 2013.

“I say this from the depths of my conscience: South America and Africa are the same people. It is only possible to understand the depth of the social and political reality of our continent, in the bowels of the immense African territory, where, I am sure, humanity was born. From it come the codes and elements that make up the cultural, musical and religious syncretism of our America, creating a unity that is not only purely racial among our peoples, but even more spiritual”, quoted Vice-minister Pimentel.

During his visit to Namibia, the Venezuelan delegation headed by Foreign Minister Jorge Arreaza held important meetings with the president and vice president of that country, Hage G. Geingob and Nangolo Mbumba, respectively.