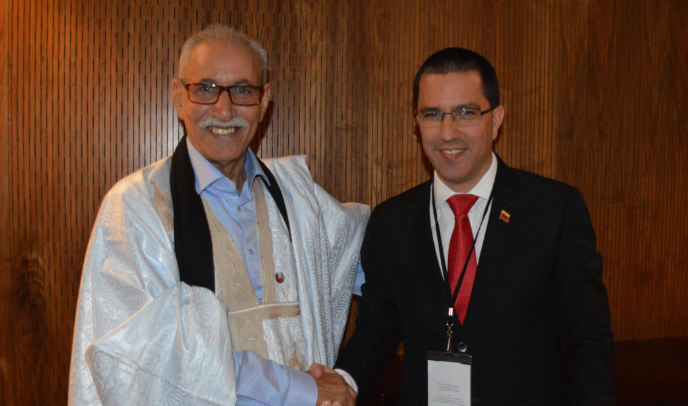 On Tuesday, in the framework of the Conference of Solidarity with the Sahrawi Arab Democratic Republic, which takes place on March 25 and 26 in Pretoria, South Africa, the Foreign Minister of the Bolivarian Republic of Venezuela, Jorge Arreaza, held an important bilateral meeting with the president of the Sahrawi Arab Democratic Republic, Brahim Ghali.

During the working meeting, the representatives reaffirmed the mutual support between both nations and celebrated the success of the Southern Africa Development Community Solidarity Conference (SADC), with Western Sahara.

The SADC advocates respect for multilateralism and international legality in the search for a peaceful and lasting political solution that allows the self-determination and independence of the people of Western Sahara.

In this context, the Southern African Development Community (SADC) was established as a development coordination conference (SADCC) in 1980 and became a development community in 1992. It is an intergovernmental organization which objective is to promote growth sustainable and equitable economic and socio-economic development through efficient productive systems, deeper cooperation and integration, good governance, lasting peace and security among the 15 member states of southern Africa.

The main objectives of the Southern African Development Community (SADC) are to achieve economic development, peace and security and growth, reduce poverty, improve the level and quality of life of the people of southern Africa and support to socially disadvantaged people through regional integration.