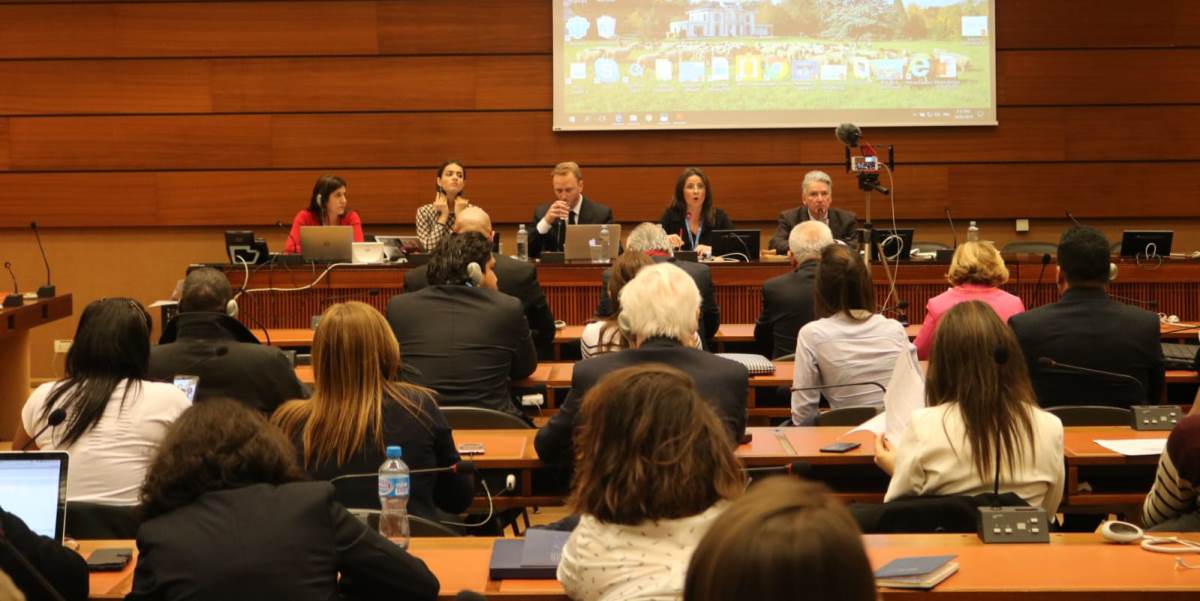 For the second consecutive day, social organizations and human rights experts meet at the United Nations Palace of Conventions in Geneva, Switzerland to denounce the illegal financial blockade that the imperial powers apply against Venezuela, and also to show the world the terrible impact that these unilateral and illegal coercive measures have on the Caribbean nation.

On this occasion, the forum was attended by the director of the Organization of Human Rights Sures Venezuela, María Lucrecia Hernández, the secretary of the World Council of La Paz (CMP), Gabriel Aguirre, and the president of the Latin American Foundation for the Human Rights and Social Development (Fundalatin), María Eugenia Russian.

During her speech, the director of the Sures organization, María Lucrecia Hernández, stressed that the various reports delivered by non-politicized experts with extensive experience, such as the report submitted by the UN Special Rapporteur, Alfred de Zayas should be taken into account.

For his part, Hernandez expressed his proposal to request the high commissioner of the United Nations, Michelle Bachelet, to work together with social organizations in Venezuela and overcome political biases in the face of the difficult situation that Venezuelan society is experiencing due to the unilateral coercive measures applied by the United States government since 2014.

Similarly, the Director of the Organization Sures exhorted the High Commissioner to “condemn and pronounce against the negative impact on human rights, in addition to the violation of Public International Law and the principle of self-determination of the peoples that cause the economic blockades against the countries”.

In this regard, Hernandez said he believes that the conditions and guarantees are given for the United Nations High Commissioner to visit the country, thus constituting an important step for the achievement of national dialogue and peace in Venezuela.

Gabriel Aguirre, Secretary of the World Council of La Paz, stressed that “since 2015, 27 companies have been sanctioned, including the country’s main industry, PDVSA. Like 22 officials, including the President of the Republic who is prevented from mobilizing the accounts of the nation that are in banks abroad”.

Likewise, Aguirre warned that “with the approval of the sanctions against Venezuela, access to medicines fell by 75%. These actions and measures undermine the Venezuelan economy by directly affecting the people and are aimed at strengthening the argument of a supposed humanitarian crisis that would allow intervention in the country”.

Aguirre also declared that “it corresponds to this Council to designate a mission to study the systematic violations of Human Rights by the US in Venezuela and bring them to justice”.

During her speech, the president of Fundalatin, Maria Eugenia Russian, added that “the economic losses in these coercive measures add up to more than 21 million dollars equivalent to the importation of medicines and food for five years for all Venezuelans”.

Next, Russian urged the UN Human Rights Council to join efforts to recognize unilateral coercive measures as crimes against humanity, which systematically and deliberately affect the entire civilian population.

Finally, the president of Fundalatin expressed her rejection of the update of the report on Venezuela presented by High Commissioner Michelle Bachelet, since “this update makes invisible the violence actions carried out by sectors of the Venezuelan opposition, which have left an unfortunate balance of victims who have been burned alive or simply killed”. She also stressed that “no objective balance of the Venezuelan situation can obviate this reality”.

Similarly, Russian said it took her by surprise that the High Commissioner has not condemned the gross threat of military intervention by the US, this not only violates stability and peace in Venezuela but also in the region.