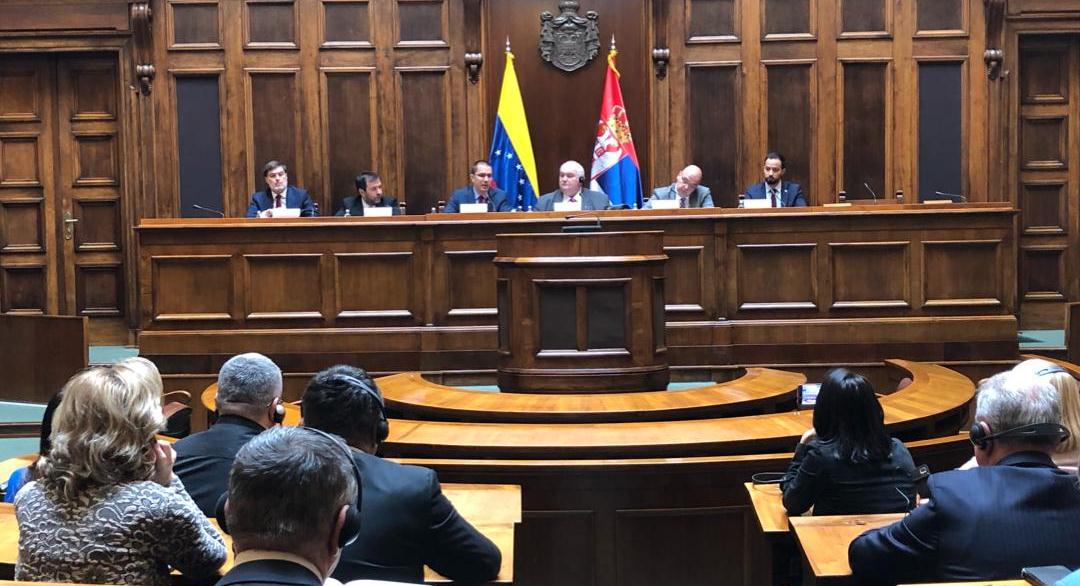 As part of the work tour carried out by the foreign minister of the Bolivarian Republic, Jorge Arreaza, for Europe, this Saturday he held a meeting with leaders of the Parliamentary Friendship Group (GAP) with Venezuela of Serbia, chaired by Djordje Komlenski, who also serves as deputy of the Socialist Movement of Serbia.

At the meeting, which took place in Belgrade, capital of Serbia, the Venezuelan Minister received various expressions of solidarity and support from European parliamentarians, who expressed their rejection of the policy of harassment exercised by the US administration against the South American country.

In that sense, the president of the GAP with Venezuela, Djordje Komlenski, expressed concern about the threat of military intervention that looms over the nation through the alleged “humanitarian aid”, which the United States government intends to enter the Venezuelan territory with the consent of sectors of the national and international right.

“Yugoslavia was illegally attacked by forces of the North Atlantic Treaty Organization (NATO), under the pretext of humanitarian aid, we do not want it to be repeated in Venezuela. We hope they learn from our experience, because the enemy is the same (…) The United States is an enemy of the freedom and independence of peoples”, he said.

For his part, the vice president of the National Assembly of Serbia, Vjerica Radeta, said that the situation in Venezuela is a “textual copy” of what happened in Yugoslavia in 1999, when NATO executed the so-called Operation Allied Force, which left a balance of 2,500 deaths and more than 10,000 people injured.

Radeta said that prior to the bombing of Yugoslavia, political leaders were touring the world “seeking sanctions and military intervention to get Slobodan Milošević, action similar to that undertaken by some leaders of the Venezuelan right and by the same deputy of the National Assembly in contempt, Juan Guaidó.

“We suffer the economic sanctions, the military intervention of NATO, we do not want the same for Venezuela. We stand in solidarity with the Venezuelan people and their government. The same allies of Serbia, are the allies of Venezuela”, he said.

Meanwhile, the deputy Milorad Mircic, denounced that the pretext of humanitarian crisis is always used to intervene countries. Hence his support for Venezuela, in the presence of the enemies of the Homeland.

“The enemy always seeks to use the excuse of the humanitarian crisis to create problems. We want to express our support and say that Venezuela is a rich and peaceful country”, said the politician.

Another speaker was Nataša Jovanović, who expressed her unrestricted support for Venezuela, while reminding that both Serbia and Venezuela are countries that love freedom and peace. Likewise, the Leader reaffirmed that the only government that recognizes the Serbian Radical Party is that of President Nicolás Maduro Moros.

“Both Serbia and Venezuela are countries that love freedom and peace. The enemies only look for the natural resources of the rich countries. Guaidó can not teach the people about democracy, that is why we as a party recognize as the only legitimate president of Venezuela to Nicolás Maduro”, said Jovanović.

Analogies between Yugoslavia and Venezuela

Recall that Yugoslavia was dismantled with the “humanitarian intervention” of NATO as a turning point, by the International Monetary Fund (IMF) and the World Bank (WB), under the western leadership of Germany and the United States. That country was the last remnant of European socialism, with a policy outside the decision-making radius of the USSR and China at the time.