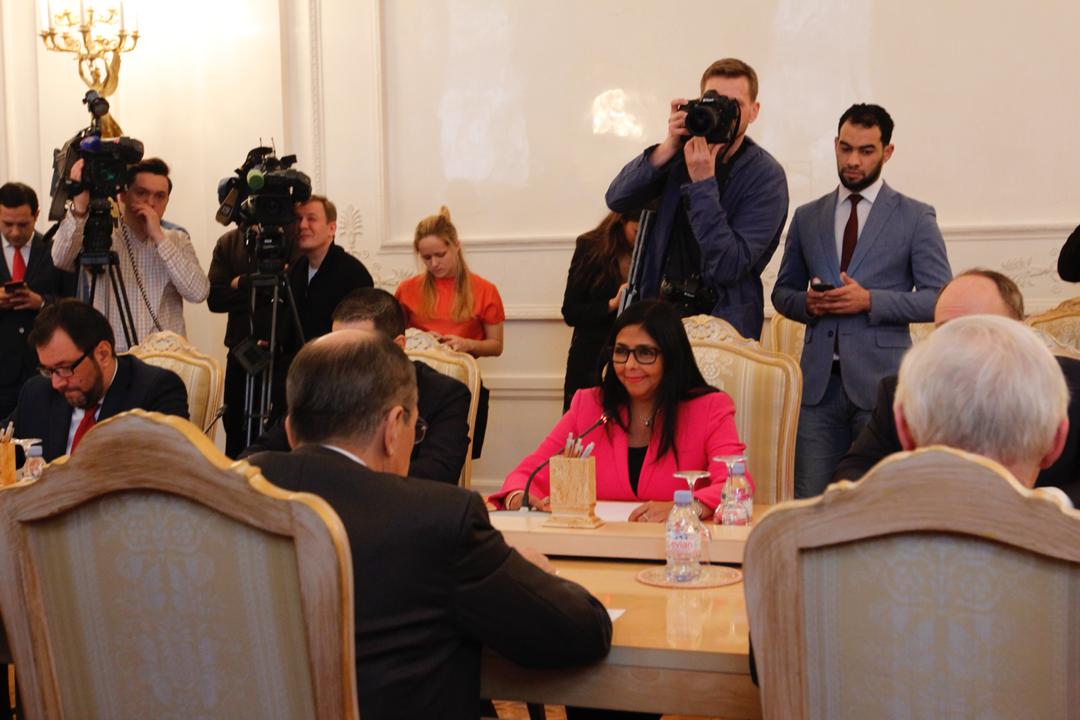 The Executive Vice President of the Bolivarian Republic of Venezuela, Delcy Rodríguez, arrived in Russia on Thursday, with the aim of continuing to strengthen the relations of brotherhood and cooperation between both nations.

Through her Twitter account @DrodriguezVen, she highlighted that this visit is part of the construction of a world of peace and justice.

“We have come to the Russian Federation to strengthen our strategic relations. President Nicolás Maduro consolidates the path of Commander Hugo Chávez and we expand bilateral and international cooperation. We build a world of justice, peace and balance! Venezuela will keep wining”, she said.

This visit was also favorable to hold a working meeting with the Foreign Minister of the Russian Federation, Sergey Lavrov, within the framework of the Bolivarian Diplomacy of Peace and the strengthening of the strategic alliances held by both nations.

Rodríguez reiterated that it is an opportune moment “to open new paths in the new geopolitical morphology, that is why we come with an agenda of cooperation and consolidation”.

On the other hand, the Executive Vice President noted that Venezuela currently lives a particular moment “where is victim of the multiform aggression directed from the United States of America”, to take control of the natural wealth of the Homeland, interventionist actions that have been rejected by nations and organisms around the world.

PDVSA office in Lisbon will be moved to Moscow

During a press conference held this Friday morning in Russia, the Executive Vice President, Delcy Rodríguez, informed that the Venezuelan Head of State, Nicolás Maduro, gave instructions to close the office of Petróleos de Venezuela SA (PDVSA ) in Lisbon with the intention of being transferred to Moscow.

“President Nicolás Maduro has instructed that the office of Petróleos de Venezuela S.A. in Europe, which is located in Lisbon, be transferred to Moscow, as a way to strengthen cooperation between Russia and Venezuela”, she said after a meeting she held with authorities of the Russian Federation at the headquarters of the Russian chancellery.

In addition, the Executive Vice President denounced that “we know what is happening with the assets of Petróleos de Venezuela, both in the United States and in other intolerant countries, they are depriving the country of its financial resources or, in the specific case of the British Government, which has decided through the Bank of England, to seize Venezuelan gold”.

She affirmed that the Homeland of Bolívar will take legal action to guarantee the right to defend its financial assets, which are located in other countries.

As for the alleged humanitarian aid promoted by the US government, she said that the construction of this artifice, created in 2015 in relation to Venezuela, responds to the words of the then head of the Southern Command of the Pentagon, John Kelly, who said that if a humanitarian crisis occurs in the country, the USA would intervene militarily.

However, “we have manifested and ratified it, the Venezuelan Government is in the process of working with the United Nations International Cooperation Agency to receive humanitarian technical assistance through the international organization or countries such as Russia, but never with countries that have exercised unilateral and arbitrary actions against Venezuela”.

“We will continue to consolidate the path of our bilateral and international relations, we will further expand our cooperation, our commercial mechanisms”, he added.

Regarding this, Rodriguez reiterated that the medicines and food needed by the Venezuelan people, will be purchased from Moscow, in addition to establishing an industrial investment for the production of those in the Caribbean nation, jointly with Russia.

“It is the good news for the world, for Venezuela and for Russia, which is the consolidation of our strategic partnership for the benefit of both peoples”, she concluded.