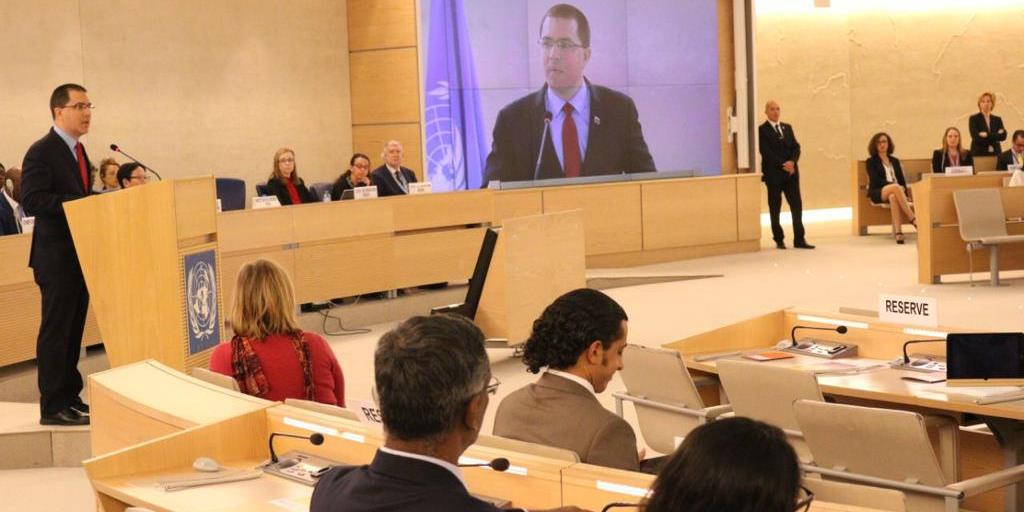 From the Human Rights Council of the United Nations (UN) with headquarters in Geneva, the Foreign Minister of the Bolivarian Republic of Venezuela, Jorge Arreaza, denounced on Wednesday the harmful effects of unilateral coercive measures imposed by the government of the United States to the South American country.

Specifically, he referred to the blockade on transactions and resources of the Venezuelan State in the international arena, which has been intensified under the administration of Donald Trump and that makes it impossible to acquire basic goods to satisfy the needs of the Venezuelan people.

“It is almost a challenge to import into Venezuela what is needed, not because you do not have the resources but because the international bank, in its fear that it will also be sanctioned, refuses to work with Venezuela”, explained the Venezuelan diplomat, although, he assured that the national government has designed other alternatives with allied countries to serve the population.

He specified, in this framework, that only from the end of 2017 until December 2018 30 billion dollars were blocked, to which were added another 30 billion in the illegal confiscation of the subsidiary of PDVSA in the United States, Citgo. To these figures are added 1,200 million dollars blocked in the Bank of England and 1,400 million euros retained by the company Euroclear, among tens of billions of dollars stuck in international banking.

In his speech, the People’s Power Minister for Foreign Relations urged the UN Human Rights Council to raise its voice in the face of the imposition of unilateral coercive measures, taking into account that the blockade against Venezuela – or against any other country in the world – flagrantly violates the Charter of the United Nations and the principles of civilized coexistence among States.

Foreign Minister Arreaza also denounced the operations of false flag that during the last few days the US administration has bashed with the complicity of Colombia to attack Venezuela, “trying to force a ‘humanitarian aid’ as a pretext to intervening my country”.

In his speech, the diplomat reiterated the invitation of the Venezuelan State to the United Nations High Commissioner for Human Rights, Michelle Bachelet, to visit the South American country. In this regard, he informed that Caracas is close to receiving a delegation from the High Commissioner so they, in absolute freedom, can witness the reality of Venezuela and the damages of the coercive measures imposed by Washington.

On the other hand, and in spite of the marked differences and illegal sanctions, he ratified the willingness of the Government of President Nicolás Maduro to establish dialogue mechanisms not only with the Venezuelan opposition but also with the administration of Donald Trump.

“We believe that the United Nations can do much to bring the parties closer together in Venezuela. We also believe that they have to denounce the aggression against Venezuela and that we have to stop this war, I hope I do not have to come next year to talk about the victims of a war against my country”, he said referring to the threats of military intervention made by the United States. United.

Apart from this situation, Minister Arreaza commemorated the 30th anniversary of El Caracazo, an event that has transcended as the most bloody violation of Human Rights in the contemporary history of Venezuela.

“30 years ago, on a day like today, our country witnessed the most important violation of human rights that could have occurred throughout the Venezuelan history of the 20th century. It was the first social and massive protest against neoliberalism that was repressed in a terrible way”, he added.