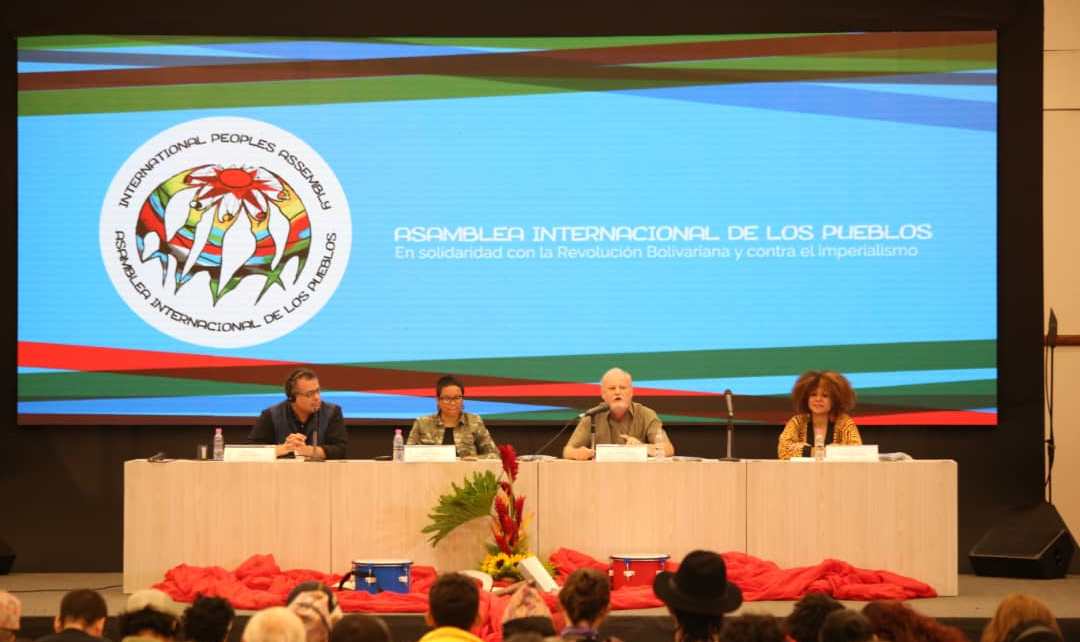 More than 400 popular fighters of the world install the International Assembly of Peoples in Caracas.

This Sunday, from the Hotel Alba Caracas, was installed the first International Assembly of Peoples, a space where more than 400 representatives of social movements and political organizations from more than 80 countries of the world will converge to discuss and deepen international solidarity and fight against interference and the US empire in Venezuela.

The opening ceremony was attended and led by the Vice-minister of International Communication of the People’s Power Ministry for Foreign Relations, William Castillo, who applauded this initiative that seeks to develop a platform for coordination and articulation of the struggles of the peoples of the world.

“Venezuela is chosen to be the seat of the International Assembly of Peoples because of the circumstances of our country today, which is at the center of world geopolitics and is the defense trench of the peoples facing the advance of US imperialism”, he emphasized.

He also thanked the gestures of solidarity, political diversity and understanding of all the delegations that are participating and reiterated that the Bolivarian Government continues to develop diplomatic, multilateral strategies in the United Nations with more than 60 countries that are supporting dialogue and peace to achieve a peaceful and democratic solution.

International delegates bet for the union of the peoples

The various international delegates also expressed their full support for the Bolivarian Revolution and highlighted the havoc caused by neoliberalism and the capitalist model in the world.

João Pedro Stédile, from the Landless Rural Workers movement in Brazil, said that today society is facing a civilizational crisis, and that the values ​​that were built in the history of humanity under solidarity, justice and equality, Capitalism replaced them with consumerism, selfishness and individuality.

The Brazilian delegate emphasized that you can not build a society based on individualism.

Joao Pedro assured that the development of a common agenda will be able to fight the neoliberalism that divided the working class and increased poverty, and thus face the capitalist empires, like the United States, that try to seize the natural resources of other peoples, to lessen their crisis.

Claudia de la Cruz, organizer, educator and representative of the US delegation, spoke about the United States’ intention on Venezuelan natural resources, and extended her support to the Bolivarian Revolution

“We are 140 million poor people who are struggling daily to try to live with dignity, hispanics, workers, for this reason we understand that the Bolivarian Revolution is a global project that is committed to life and the progress of the struggles of our peoples that have been impoverished”.

She stressed that any threat to the Revolution is not just an attack on Venezuela, but an attack on all processes of sovereignty and against power of the peoples of the Earth.

De la Cruz explained that in order to understand the violent nature of the imperialist offensive and its interest in Venezuela’s resources, it is necessary to have a real reading.

“It has been 11 years since the financial crisis arose, which is capitalist and global (…) In the United States, the economy is relying heavily on financing external debts and printing dollars to avoid a total collapse”, she said.

For her part, the mayor of the Libertador Municipality, in Caracas, Érika Farías, also pointed to the union of the peoples of the world.

From February 24 to 27, the International Assembly of Peoples will give way to debate on issues related to popular sovereignty, financial capital, tax havens, decent jobs, social rights, human rights, migrations, refugees, the LGBT community and the feminist, afro-descendant and indigenous struggles.