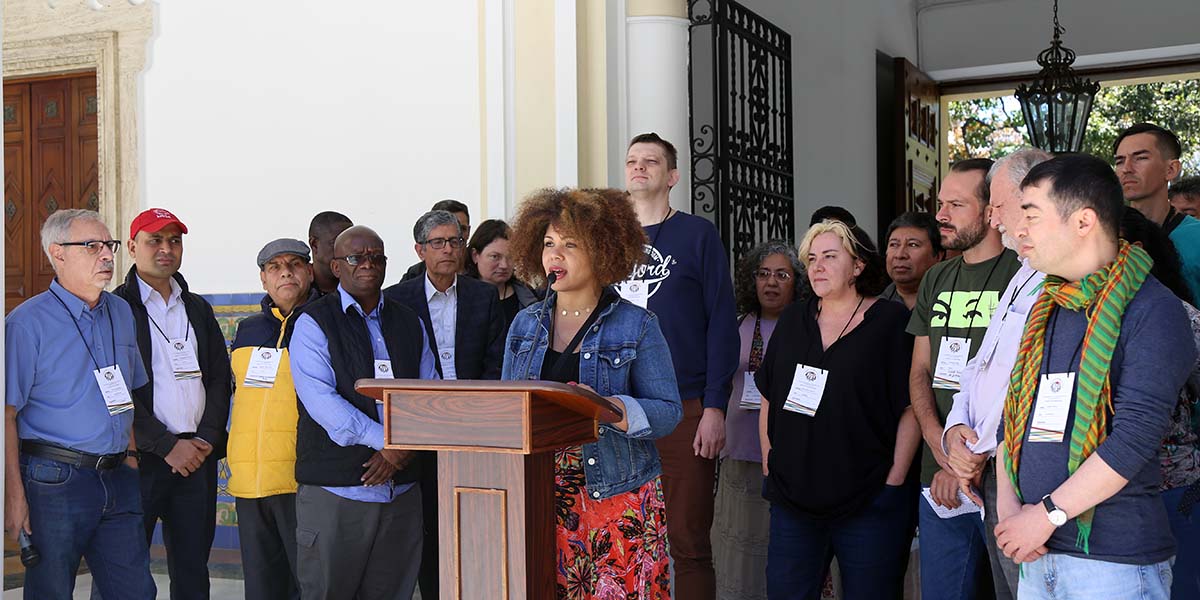 This Saturday, diverse representatives of popular movements of Venezuela and the five continents, expressed their support to the Bolivarian Revolution and to the president, Nicolás Maduro Moros, during a meeting prior to the opening of the International Assembly of the Peoples, from the Casa Amarilla, Antonio José de Sucre, in Caracas.

In the presence of the media, spokespersons from different countries of the world rejected the interventionist measures applied by the US government with the help of other nations in the region.

“The peoples of Europe do not want a military intervention and part of our objectives is to develop an agenda of solidarity with Venezuela that can also be applied in Europe”, said Marga Ferré of the United Left Movement in Spain.

On the latent threat of the American empire, Ferré, stressed that each nation has the right to govern itself as its people decide, democratically, “and it is everyone’s responsibility to prevent an aggression by those who believe that having more weapons can impose their ideas”.

The spokeswoman of the United Left Movement, said that during four days they will be discussing ideas for the construction of an action plan, they will also make a political declaration that will be taken to their countries to keep working for Internationalism.

On behalf of the countries of Africa, Cosmas Musumali of the Socialist Party of Zambia was present. “For 500 years the African people have suffered a colonialism, we perfectly understand their struggle (…) it is unacceptable that foreign authorities think that the sovereignty of the country does not belong to their own people”.

The African spokesman, denounced the ignorance of other countries towards the will of the Venezuelan people in other countries, its institutions and its Constitution, also described as unacceptable the theft of billions of dollars by the US empire by freezing Venezuelan assets in American banks.

“Venezuela can not be colonized and can not be sold, we are here to commit ourselves to the Bolivarian Revolution”.

For her part, Claudia Cruz of the Popular Education Project of the United States, described as shameful, criminal and immoral, the statements issued continuously by the American spokespersons, about a supposed humanitarian crisis when the North American country harbors more than 140 million poor people.

“Venezuela has a struggle in defense of life, it is an example to the resistance and to the struggle for the dignity of all the peoples of the world, that is why we understand that our commitment and historical legacy is to defend it with all our strength”, Cruz added.

For his part, Rodrigo Suñe, representative of the Levante Popular da Juventude, from Brazil, was able to demonstrate, during the days he was in the company of the young brigadists, the lie that the media have positioned against the Bolivarian Republic of Venezuela, and reiterated that Imperialism only seeks the looting of the South American country’s natural resources.

All the spokesmen present agreed on the need to counteract the false media propaganda through the networks of solidarity that are scattered throughout the world, with recordings through social networks and with full days of exchange in communities in Caracas, so that foreigners can show the achievements obtained in Revolution.