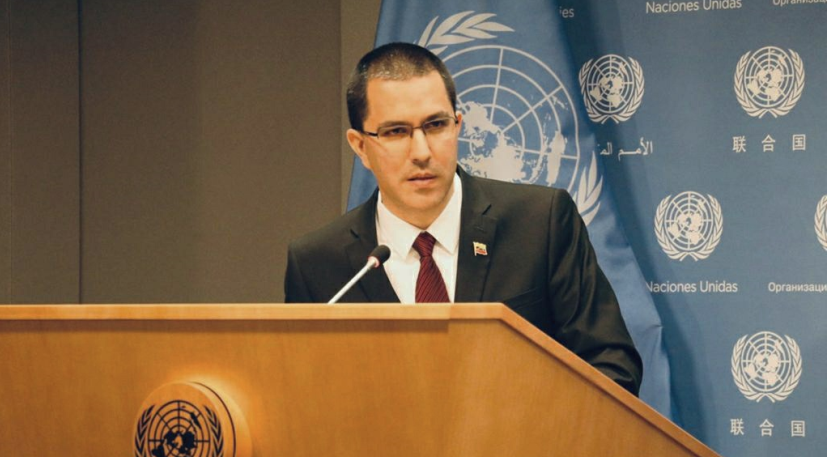 Foreign Minister Arreaza at the UN: I wish that all countries respect the Charter of the United Nations

During a press conference at the headquarters of the United Nations Organization (UN), in New York City, the Foreign Minister of the Bolivarian Republic of Venezuela, Jorge Arreaza, explained that 60 delegations from different countries met to defend the Charter of the multilateral body.

“We have met with the group that has emerged to defend the fundamental principles of international law, reflected in the Charter of the United Nations”, said the Venezuelan Foreign Minister.

The Venezuelan diplomat emphasized that the group of member states of the UN has worked on seven concrete actions for the self-determination of the peoples.

“I wish that all countries respect the Charter of the United Nations. When the aggressions threaten the peace of the world, it is time to defend the peace and sovereignty of the countries”, stressed the Minister.

FM Arreaza also commented on the meeting he met this Friday with the Secretary General of the UN, António Guterres, within the framework of cooperation between the Venezuelan government and the United Nations system.

He stressed that, “we have met for the third time with the secretary of the United Nations, António Guterres, to evaluate the cooperation, the technical aid mechanisms that facilitate the acquisition of food, medicines and equipment that we will pay”.

He also said that the South American country has resources to pay for the food and medicines that the population needs, but US sanctions prevent this action, which directly harms the citizens.

Regarding the border, he denounced the attempt to violate it, under the excuse of “humanitarian aid”, without the UN itself and the Red Cross approving such action. He added that “the Secretary General himself is opposed to any threat by the use of force”.

He stressed that Venezuela is in peace and that the Bolivarian Government is “concerned about the presence of paramilitaries on the Colombian border, as well as irregular groups, contraband groups and drug traffickers.”

The People’s Power Minister for Foreign Relations denounced again the pretensions of the United States Government to execute a military intervention through the entrance of the supposed “humanitarian aid” from the city of Cúcuta, in Colombia, to Venezuelan territory.

He warned that this strategy of countries allied with the violent plans of the Donald Trump government is exactly the same as that used in the coup d’état against Comandante Hugo Chávez in April 2002. “On that occasion, they used snipers who murdered Venezuelans of both parties sides and then accused the government to justify their overthrow, but the people and the Bolivarian National Armed Forces rescued the truth and within 47 hours also rescued Chavez.

In a sense, he said that “with tomorrow’s operation, they want something to happen with the Bolivarian National Armed Forces, but this coup d’état is in its way to extinction”. While he assured that in Venezuela there is a “media war” that seeks to install “false flags” that involve the FANB.

“There is a great media war. The Venezuelan military never give orders to shoot the unarmed people”, said the Foreign Minister.

Similarly, he said he expects that this Saturday, January 23, there will be no facts to lament on the Colombian-Venezuelan border. “I hope that sanity reigns in Colombia, in Cúcuta and stays in a show, and do not intend to open the doors to an intervention in Venezuela”.

FM Jorge Arreaza reiterated the call to dialogue to the Venezuelan opposition in order to guarantee peace and mutual respect between Venezuela and the United States.

“We want dialogue with the United States (…) we want peace with your government and we want mutual respect among us”, he said.

On the other hand, the Diplomat urged the media to have “a lot of professional rigor, you have to poke around, be smart in the face of these false flags”, referring to the events that occurred on the border with Brazil.

On the other hand, the Minister confirmed that the Bolivarian Government talked with other nearby countries to express their concern about a possible foreign military intervention.

“We communicate with the authorities of Puerto Rico and the Dominican Republic, we expressed our concern and they denied the arrival of these special forces to their territory, we trust that this is the case”, he explained.