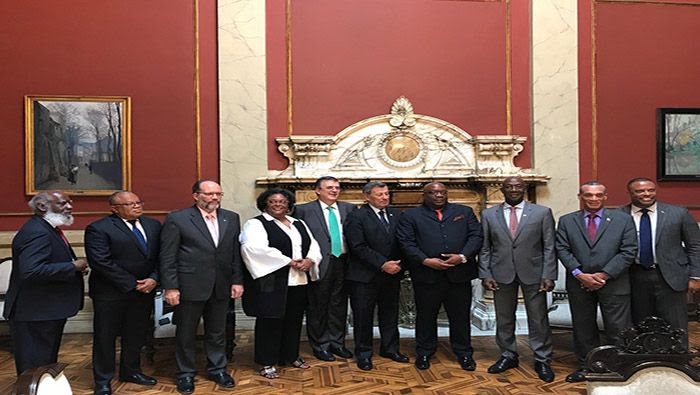 What is the Montevideo Mechanism?

Last Thursday, February 6, the Montevideo Mechanism was activated in Uruguay, with the intention of promoting dialogue among the political sectors in Venezuela. This meeting was initially convened by the governments of Mexico and Uruguay and brought together countries that believe and defend dialogue as the only possible way to resolve political differences between the Bolivarian Government and the opposition.

At the end of January, the governments of Uruguay and Mexico agreed to hold an international conference in Montevideo with the aim of laying the groundwork for establishing a new mechanism for dialogue that would allow Venezuelan forces to reach an agreement that would restore peace and the economic stability of the country, this would start the Montevideo Mechanism.

This initiative arose in response to the events that took place on January 23, 2019, when the Venezuelan opposition led by the US government decided to launch a coup strategy against the constitutional president of the Bolivarian Republic of Venezuela, Nicolás Maduro Moros, by self-proclaiming deputy Juan Guaidó, as interim president of the Republic, without any legal basis.

The Four Phases of the Montevideo Mechanism

The Montevideo Mechanism activated with the intermediation of Mexico, Uruguay, and 14 countries that make up the Caribbean Community (Caricom), to which Bolivia later joined, constitutes an instrument that fosters dialogue among Venezuelan political sectors and respects the principles of sovereignty established in the Constitution of the Bolivarian Republic of Venezuela.

This mechanism consists of four phases to resolve disputes.

First phase: An immediate dialogue and the generation of necessary conditions to achieve a rapprochement between the parties involved in the conflict.

Second phase: Negotiation, presentation of the results of the dialogue and a space for the flexibilization of positions that allows to find points in common between the parties.

Third phase: Commitment and subscription of the agreements.

Fourth phase: Implementation and realization of the agreements with the support of an international accompaniment.

For his part, the president of the Bolivarian Republic of Venezuela, Nicolás Maduro Moros, said at the time through his Twitter account @NicolasMaduro, that he is ready to participate in an open agenda of understanding for peace and expressed that he subscribes to the proposal of four phases for dialogue in Venezuela, driven by the Montevideo Mechanism.

Also, through a press conference at the Miraflores Palace, he expressed his support for the Montevideo Mechanism and endorsed its four phases, taking advantage of the opportunity to make an appeal to the opposition in the country. “I reiterate the call to the Venezuelan opposition to act with sanity. The road of madness they have taken is wrong, is doomed to failure and only hurts Venezuela, take a step forward for the Peace of the Homeland”.

In parallel and due to the presence of the representatives of the different countries promoting the Montevideo Mechanism, the Contact Group announced at the end of January by the head of European diplomacy, Federica Mogherini, met on February 7, in the city of Montevideo.

This Group is made up of eight EU countries, namely France, Germany, Italy, the Netherlands, Portugal, Spain, Sweden and the United Kingdom.

This group ended its meeting with an interventionist statement that contrary to what was raised by the Montevideo Mechanism, placed as points of the Declaration the holding of new presidential elections in the Bolivarian Republic of Venezuela, even though the Constitution does not stipulate such elections for this year, and the entry of a supposed humanitarian aid denounced as an excuse to justify an intervention in the country.

Given this scenario, the governments of Mexico, Bolivia and the member countries of the Caribbean Community (Caricom), refused to sign the aforementioned declaration, highlighting their position of non-interference in internal matters and in favor of dialogue between the parties through the Montevideo Mechanism.