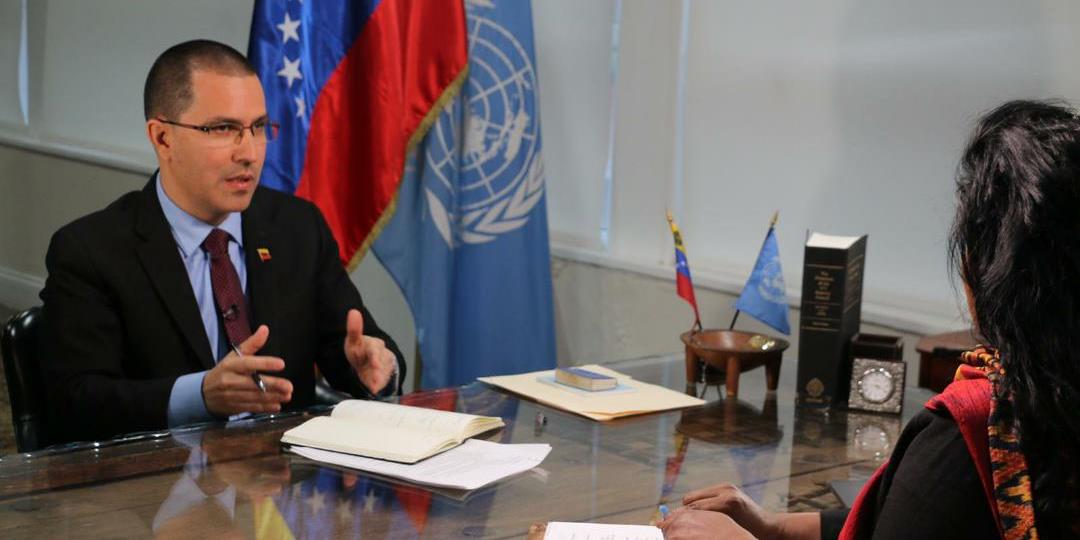 Foreign Minister Arreaza to The Real News Network: Venezuela urges the US and its allies to cease interventionist policies

The Foreign Minister of the Bolivarian Republic of Venezuela, Jorge Arreaza, once again exhorted the government of the United States and its allies from the continent and the European Union (EU) to cease the interference policy in the internal affairs of the South American country.

“It is about respecting the only empire that can exist, the rule of law, within international relations and in Venezuela. So, what we really know is that we have the support of the law and the support of the people. And most Venezuelans want to solve this by our own means. So, the only thing we are asking these countries that are interfering in the internal problems of Venezuela is to let the Venezuelans solve their own problems”, the diplomat specified in an interview granted to the US media The Real News Network.

In a matter of context, the People’s Power Minister for Foreign Relations, questioned any kind of justification about the self-proclamation of the oppositor Juan Guaidó as “interim president of Venezuela”, endorsed by Washington and some Latin American and European governments.

“And it does not have the support of the Venezuelan people, but the support of the US Administration. And after proclaiming himself president, as the so-called president, immediately after that, Mike Pence tweeted, and recognized him as the president in charge, interim president of Venezuela, he said. And after him, countries of right-wing governments in Latin America, and after them, countries in Europe”, he said.

He recalled in this context that the Bolivarian Republic of Venezuela held presidential elections in 2018 in accordance with the provisions of the Constitution of the Bolivarian Republic of Venezuela, during which Nicolás Maduro was re-elected to the First Judiciary of the country. In this regard, he highlighted the invitations made by the Venezuelan State to the EU and the United Nations (UN) with the intention of receiving electoral support missions from those countries to the elections on May 20, “but none of them accepted the invitation” .

Venezuela is at peace

In the interview FM Arreaza denounced that it is intended to project a distorted image of the current situation of the country (which remains calm despite the repeated insurrectionary calls, not only made to the population but to the Bolivarian National Armed Forces).

“They are trying to create the perception that there is chaos, that there is almost a civil war in Venezuela, and that this man (Juan Guaidó) and the United States administration are saving Venezuela. And that is not true at all”, he explained.

The threats of military intervention of the United States against the Bolivarian Republic of Venezuela and the supposed humanitarian aid of Washington were other issues questioned by the Diplomat.

“The last thing we want is an intervention, an invasion, whatever it’s called. We want our people to be at peace (…) We hope that the least the Trump administration can do is discard that option, the military option”, he emphasized in reference to the threats of the use of military force, although he assured that “if it happens, we are ready to resist, and even to win, in such case”.

With regard to the alleged humanitarian aid, he said that it is part of a show aimed at public opinion.

“If your unilateral coercive measures, also called sanctions, are having an impact on our economy that has cost more than $ 23 billion, how can you tell us that you are going to send $ 20 million”, he reflected.