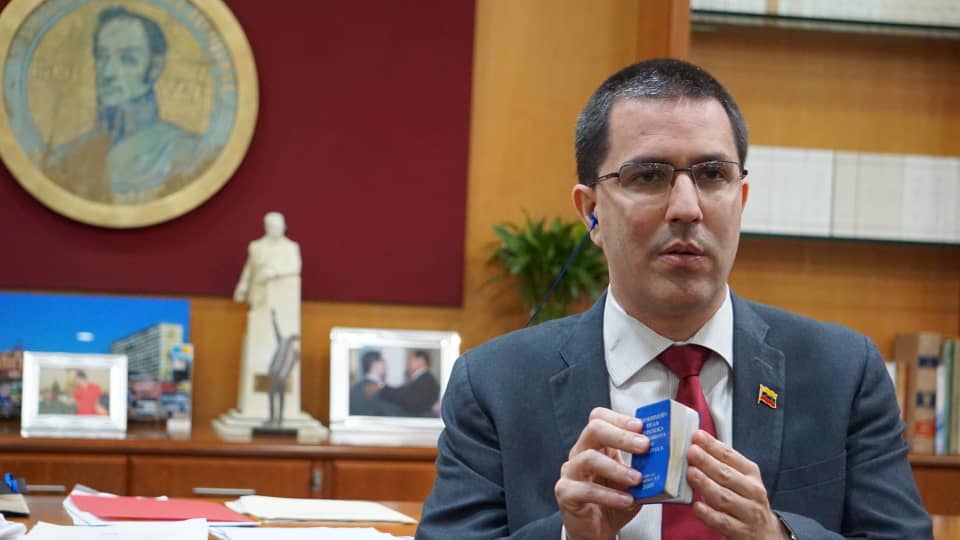 Foreign Minister Jorge Arreaza: Europe must not fall at the feet of the United States for Venezuela

After placing his signature on the document that includes the expression and will of the Venezuelan people who are in favor of peace and against the interventionist actions presided over the United States, the Foreign Minister of the Bolivarian Republic of Venezuela, Jorge Arreaza, in an interview granted to THE COUNTRY of Spain, criticized the international pressure that weighs on Venezuela and assured that the governments that execute the unilateral and coercive measures against the South American country “judge us, they condemn us, they sentence us without even having listened to us”.

Prior to his intervention in the Anti-imperialist Tribune set up in the Plaza Bolívar in Caracas, the Venezuelan diplomat held a meeting with some of the representatives of the United States who remain in Venezuela. And he assures that they will sit down to talk with whomever is needed: “In fact, there have been contacts of which you do not know”, he said.

Question. What kind of contacts?

Answer. At the highest level that we can, after many attempts. It seems incredible that we had get to this juncture. And we will establish more contacts and we will always be present so there will be fruitful relations and respect between the parties.

Q. What has to happen to make an approach to the contact group?

A. President Maduro has been very flexible with the European Union. I spent less than a year in talks with Federica Mogherini [head of European diplomacy] and told the president that I was convinced that the EU had coincided with the US’s position and was part of the plan to generate a crisis in Venezuela. Mrs. Mogherini repeated the same plan that is reflected in the proposal of the contact group. It is like a kind of immovable word, which obeys a single version of the facts. We had meetings with the representatives of the embassies, I asked the high commissioner for a meeting a week ago, at the pathetic moment of the ultimatum, but we did not get an answer. The attempts, for the moment, have been unsuccessful, but we have maintained a relationship with a group of ambassadors and with an institutionality that does not recognize us, because we are certain that Europe must distance itself from the position of the United States and help for a peaceful solution.

Q. Are there red lines?

A. To approach and communicate we have never put red lines.

Q. You speak of an unshakable word, but it gives the impression that there are also immovable things on your part. Is the presidential election a red line?

A. The red line is the Constitution, but it is not a red line, it is the most elementary. We can not call to violate the Constitution. That is what the European Union did with the elections last May.

P. But in a process of dialogue there are always red lines that another part will not cross. Would it be among these to accept a presidential election?

A. I think we are speaking a Castilian that differs. How to ask a government that by impositions from abroad violate its own Constitution?

Q. Of the three international groups seeking a way out, two seem to have little chance of succeeding because one of the two parties will not accept them. Do you see the EU as a key facilitator in the crisis?

A. It is difficult to see the EU as a facilitator if some of its members have become biased. Now, before the madness of the EU, led by Pedro Sánchez, it seems that what he wants is to wash his face. Go to countries in Africa or Haiti, a few miles from the United States, where there is a real humanitarian crisis. Europe can not fall at the feet of the United States.

Q. Is Venezuela in a position not to receive humanitarian aid or would it be willing to receive it from international organizations?

A. The president told the European ambassadors that if they want to help unlock the 1,600 million of Euroclear, which is based in Brussels. Or that they give us credits, that we are going to pay with interest, to compensate the United States blockade. That is what one would think about the European Union, that there would be a Jean Monnet and its spirit and everything that emerged after the Second World War against fascism and impositions. We can calmly pay for what we need.

Q. Do you affirm that there is no crisis of scarcity of food and medicines in Venezuela?

A. How can not be deficiencies in some products if we have a blockade. The costs of this year’s sanctions exceed, with the eventual confiscation of Citgo, the 30,000 million dollars. Obviously there must be some limitations. The EU, the Spanish Government, the UN, should do what they did in Cuba after almost 60 years: ask for the end of the blockade. Hyperinflation can have a component of 25% responsibility of the Venezuelan Government, but 75% is induced by a type of change that they put in some web pages.

P. You always speak of the external enemy, of the economic war, but what have you done wrong, what concessions are you willing to give?

A. The concessions have to be made from outside. We are willing to receive development assistance from the UN, to allow us to have access to international credits with flexible payments. But there is no minimum offer.

P. With concessions we also alluded to the management, if errors are allowed.

A. We are a government of human beings and surely we make many mistakes, but I can assure you that, if our economy were not blocked, if its institutions were not boycotted, the situation would be ostensibly better. If we sat Joseph Stiglitz, or [Yanis] Varoufakis, they would say that they can not do anything here, because the laws of the economy in a situation as disturbed as the Venezuelan one are not possible.

P. You have denounced the interference of the United States, of the European Union, of Latin American countries …. What is the role of Cuba in the Venezuelan Government?

A. That is even offensive to Cubans. What Cuba has done is that when the Venezuelan doctors did not dare to go to the neighborhoods and the hamlets and the jungle, the Cuban doctors came and did it. When we had deficiencies in physical therapies, the Cubans came and they did. That has been Cuban aid. Here live a little more than 8,000, 9,000 Cubans who are in the neighborhoods helping people, doctors, teachers.

Q. There is discontent among your own voters. Does it worries you?

A. It is the strategy for three years, hit the economy to even harm the efficiency of policies of redistribution of income in the population and that consequently generates rejection among the people. Have they had any effect? Surely. But they are still useless when it comes to telling who is the majority in the country. It is a permanent expression and I have felt on the street since a year that the Chavez forces are recovering.

Q. What do you think about the drip of desertions of officers, officials or diplomats?

A. In 2002 we experienced a trickle of generals, there was an important military situation there. Now I think there is an active general [who has defected]. The diplomats are called from abroad and get offered a green card, a permanent job, access to housing so that they can pronounce themselves in favor of this Government of Narnia, an imaginary government.

P. In addition to the military leadership, you have under your control the para-police forces, collectives, the FAES [Forces of Special Actions] …

A. I do not know what they are referring to. In 2017 when they burned 29 Venezuelans, male and dark skin, in the neighborhoods of Caracas mothers said: “Go and avenge the death of those boys”. We had to deploy to the neighborhoods of Caracas, Maracaibo, Valencia to talk with the groups that you call collectives. If it would not had been for the control of the revolution, that struggle here would have ended in a civil war but it has not and it won’t be expressed in a civil war even if it is induced from the outside.