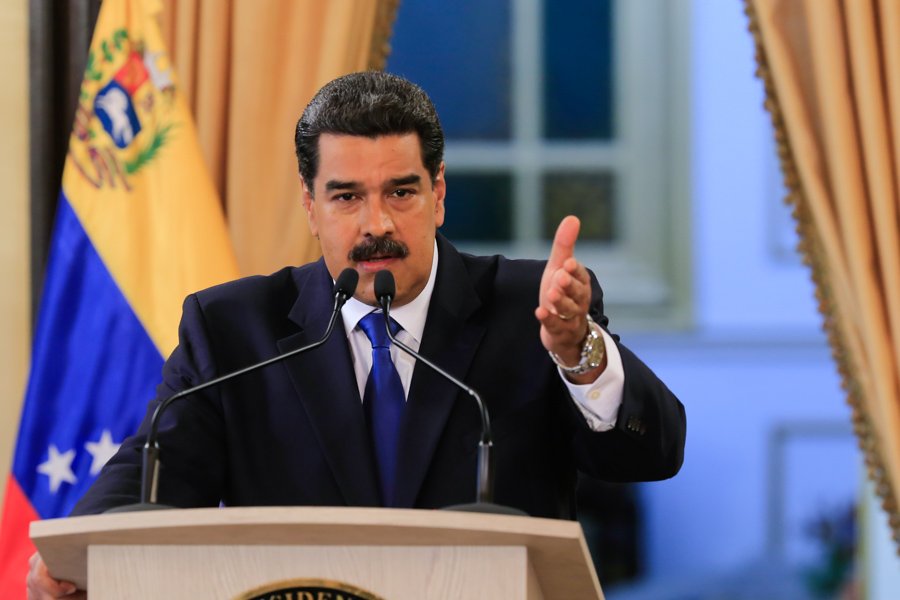 President Mauro: Within 24 hours two million signatures have been collected in favor of peace

The president of the Bolivarian Republic of Venezuela, Nicolás Maduro, during a press conference, held at the Miraflores Palace, on Friday, said that in just 24 hours two million signatures of Venezuelans have been collected, who subscribe to the Charter to peace, which will be delivered in a popular march in the White House.

“They have failed. Our country today is more determined than ever to fight for its independence, dignity, for its historic right to exist, for its right to peace”, he declared.

In the Simón Bolívar Room, at the presidential palace and in the presence of more than 60 representatives of audiovisual media and national and international agencies, the head of state began the meeting by saying: “we are facing and developing all of the defense of Venezuelan democracy, we are in a great day of defense of Venezuelan democracy, of the defense of national sovereignty, of the right to peace, three key elements that are linked: democracy, freedom of the people, sovereignty, territorial integrity and the right to peace, three elements that are being subjected to harassment, permanent aggression, trying to impose, above the Constitution, formulas that are not contained in it: a dual, parallel, phantasmagoric government that is not supported by any letter or mandate of the Constitution”.

The constitutional president, Nicolás Maduro Moros, referred that the government of the United States, tried to violate the national sovereignty, at the same time mentioned the show “called humanitarian operation and the peace threatened by the government of Mr. Donald Trump who has ratified, last Sunday in television interview, his threat of military invasion against Venezuela”.

The National President mentioned the meeting in Montevideo, on the eve of this Wednesday, 6th, “for a diplomatic initiative for dialogue and peace in Venezuela, the governments of Mexico, Uruguay, Bolivia and the 14 Caricom governments in the Caribbean, subscribed a document called the Montevideo Mechanism, which respectfully takes steps towards a dialogue among Venezuelans, with the facilitation and support of our Latin American and Caribbean brothers, within the framework of the principles of international law, the principles that unite us as a region”.

“I have greeted this initiative and I have confirmed that we are in the immediate disposition to accompany any action that goes in the way of diplomacy, dialogue, understanding, meeting, among Venezuelans, it seems very important that once again, from Latin America, from the Caribbean arise peace initiatives, respectful of national sovereignty so Venezuelans can work on a path of dialogue, peace, are very important initiatives”, he said.

He stressed the reaction of repudiation and rejection of the threats of Donald Trump in the world and said: “It is very dangerous that the president of the most powerful and aggressive military power in the world says he has the military option against Venezuela”.

“Venezuelans ask ourselves: what is the cause of war? According to even international law, which has existed for decades, what is the pretext or motive to threaten a peaceful country? what is it? Is there any just cause, that could be called a pretext or motive, to threaten the use of force, in violation of the United Nations Charter?”, He asked responding: “We all know there is none, even beyond the opinions that some may have about the Bolivarian Revolution, of the revolutionary government that I preside, beyond the opinions some may have of the socialism of the XXI Century that we strive to work in building and creating, beyond that, there is an international law, there is international justice, and that right and that international justice, seen from any point of view, simply leave naked the intention of that dominant imperial elite in the White House to seize Venezuela for its oil resources, mining resources, for the great wealth of our country”.

He explained that from the United States an operation was mounted during the last years in order to harass, corral and surrender the country, however, he said: “They have failed, our country today is more determined than ever to fight for its independence, for its dignity, for its historical right to exist, for its right to peace”.

He reported that, just in 24 hours of starting the work day for peace, in all the Bolívar squares of the country, two million Venezuelans had demonstrated, with the collection of signatures, their support to the Open Letter to the American people, to be delivered in popular march to the White House, in the United States.

When considering the peace initiatives assumed by the Venezuelans, he expressed the way how daily lies have been fabricated about Venezuela, and denounced that the arguments, force and power of the Bolivarian Government are invisible.

He expressed: “you can not impose the unique thought, from the White House of Donald Trump to the world, the unique thought using all its power to destroy a country with a noble project, as it is the Bolivarian project, we have a lot of moral, spiritual and political reserve, in Venezuela, to inform you, social communicators of the world, Venezuela is standing and will keep standing, I hope this true can be transmitted on the keyboards of your computers before the avalanche of aggressions, lies, manipulations, and may the truth makes its room like a ray of fulminating light, that is our faith, for that faith we fight every day”.