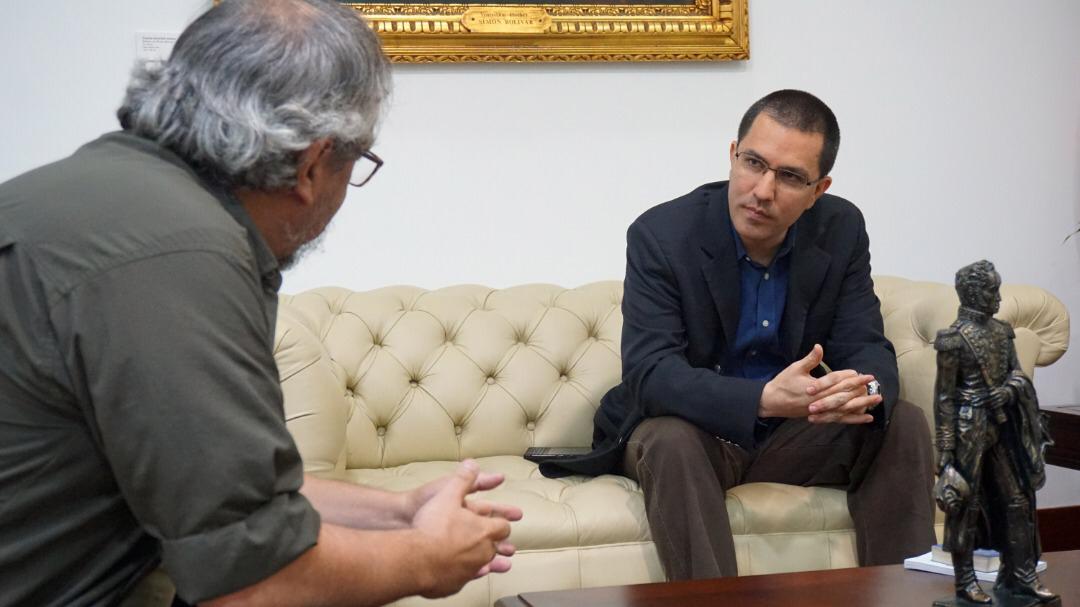 Foreign Minister Arreaza in interview to Page / 12: There is a people willing to defend this land

In an interview with Argentine newspaper Página / 12, Venezuelan Foreign Minister Jorge Arreaza spoke of the opposition offensive supported by the United States and assured that, beyond the American psychological war, the sanctions and violent maneuvers carried out by the opposition, he will continue to insist on an agreement through dialogue.

Venezuelan FM Jorge Arreaza is to speak slowly and without shrillness but with forcefulness. He carries out the confrontation and negotiation with the government of the United States that no longer hides his leadership in this new coup attempt. Anyway, during an interview with Página / 12, he insisted that beyond the American psychological war, the sanctions and violent maneuvers carried out by the opposition, he will keep insisting on an exit to the conflict through dialogue. However, he warned that if any kind of aggression occurs, “there is a military world and a people willing to defend this land, our land to the ultimate consequences but that is not what we want and we will try to avoid it”.

– A few days ago you said that the government of the United States develops a schizophrenic diplomacy. That there is a real and a virtual one that is done through Twitter but with the announcement of the sanctions, it gives the feeling that those two faces are becoming one.

-Yes, that’s the impression it gives but they are effectively giving confusing signals. They are taking steps in opposite directions. The announcement itself about the actions upon oil companies in the United States, from the legal point of view is difficult to be realized. It is not a confiscation because it is a North American company (it refers to Citgo) and it is a holding where the largest shareholder is PDVSA but it is not as simple as changing the board of directors or taking control of the company because that has a series of legal steps, even in Venezuela, for the company holding to be activated later. To do so they would have to violate all that financial and commercial legislation and leave the US without legal security for the investment. They would have to violate all their internal financial and investment regulations. I’m not saying it has no negative effect because it has it. Keep in mind that they block the accounts and therefore why are we going to send Venezuelan oil to those companies. In that sense, we will have to define in the coming days what we are going to do, but this unilateral and illegitimate measure has more a psychological-media effect than concrete consequences. We will defend the properties that belongs to the Venezuelan State but I warn you something, we can not repatriate Citgo’s resources since 2017, so there is no gigantic new impact and Venezuelan oil can be directed to other markets. This is part of their psychological strategy for their public and also for the world but it leaves them in evidence that what they really want is to take control of the Venezuelan wealth.

-The double game does not stop.

-So it is. They continue with that double board because maybe they need it before the correlation of internal strength in Venezuela. We will have to see what happens in the future because at the end of the day, when this starts to unbalance in favor of the Constitution, of the legal and formal force of our country, when it begins to wear down this attempted coup d’etat we will see what are they going to do.

-You said that this dispute is with the United States and not with the governments of the Lima Group because they respond to the administration of Donald Trump. Doesn’t it make any difference with Latin American countries?

-In general, it’s like that. When we refer to Latin American countries, we refer to right-wing governments that are subordinated to the United States. In recent years, this conservative restoration, as President Rafael Correa said, has been happening. Presidents who are entrepreneurs or who respond to corporations have come to the government. In that context, we are facing a hemispheric company where the CEO is Trump and then has the managers who compete to get a promotion and who are the presidents of these governments. So, to wear ourselves out with them does not make any sense.

– But Colombia is not different?

-Colombia has a different history that comes from the Bolivarian project of the Gran Colombia that died thanks to the neo-Granada oligarchy and since then there is a historical dispute. While there were elite governments between our two countries there were no problems, but when a popular government arrived with Bolivar’s project again, a bilateral confrontation began. However, what Colombia did was to put itself at the service of the United States. with a characteristic that is the broad and active border that it has with Venezuela.

– The photo of Bolton with the writing of five thousand troops in Colombia is a warning for Venezuela?

-Look, even the Colombian media and governments of the world believe that this can happen and that Colombia allows it. If it had been the other way around and Bolton had written Venezuela nobody would have believed it because our country had never allowed it but not only our government but also the previous ones prior to the revolution. That photo generated a worldwide controversy that forced the Colombian government to clarify that this is not real. Look, if they deny it, it’s because they know they can do it.

– Is that photo part of the psychological war?

-Yes. They gave several messages. Remember that Mr. Bolton after announcing these illegal measures also calls on the Venezuelan military to rebel against the Maduro regime. Indeed, since January 10 there is a constant call to the military. There is evidence of meetings abroad between the military and US officials to mount a coup plot in Venezuela. From there arose the attempted assassination against President Maduro. They act very strongly but they are very frustrated when they come and face a very strong monolithic unit of the FANB. We do not have financial and economic dependence on the United States and we have a FANB where neither they nor Europe convince them to betray. This will strengthen the Chavism but also the general population because it is an international aggression against the Bolivarian Republic of Venezuela where there are Venezuelans who may not be with the government or the opposition but in the face of an eventuality I am sure that not only the FANB and the militias will be, but also the people.

– What characteristics do the Venezuelan right have so that the conduct of the conflict is directly in the hands of the US?

– Perhaps the most painful thing is that we have an antinational or antipatria opposition who want to get to power and recover the oil wealth but not to distribute it to the people but to seize it as it happened between 1915 and 1998. In that obsession against socialism they are able to surrender whoever. It is painful. Chávez was crying out for a serious and nationalist opposition that loves the country and doesn’t matter if it is capitalist. And President Maduro says from the first day that within the Constitution and among Venezuelans we can understand each other and reach any agreement, but it is difficult to do so with those who receive orders from the US. Guaidó, for example, repeats the same words that Bolton uses. That is the Venezuelan opposition with whom we can not negotiate on good terms. Anyway there are nuances and not all are equal, there are some leaders who do not share the strategy of the deputy.

– Among the leaders of the right, it is said that Chavism has lost strength and its base of support. It’s the information they give to the Trump government.

– Yes, it is interesting because it is an underestimation of the popular sustenance of the Bolivarian revolution. It is that people that put us here that not only expresses itself in voting but also in social organizations but there are also wounds for this economic, political war and with expressions of armed violence. Here there were attacks financed from the USA. Here there was an attempt of assassination that could have cost a civil war. So, it is a war and the people, despite this difficulty, are mobilized and committed to defend the country, the future and our destiny.

“Last year I told you that a child had told me that he preferred sanctions rather than bombing. Is the bombing closer today?

-I remember. Today I was looking at a vignette where a child told his mother that the gringos had come to help them and asked her to get up but the mother was dead under some debris caused by a bombing. That is very strong. That is the history of Latin America and much of the world that these ruling elites in the US. have produced, bringing genocides, then the Venezuelan people are clear that this is the last thing we want, and that is why we will make every effort to find spaces for dialogue.