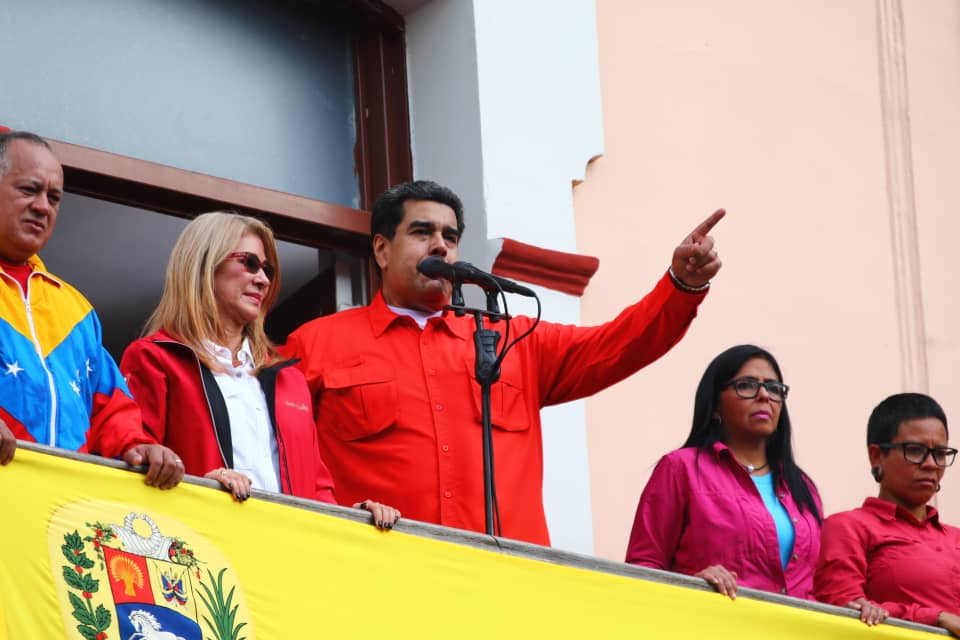 Venezuela breaks diplomatic and political relations with the United States

The President of the Bolivarian Republic of Venezuela, Nicolás Maduro Moros, in the exercise of his constitutional functions, announced on Wednesday the rupture of diplomatic relations with the United States government after the interventionist action of that country’s vice president, Mike Pence, who encouraged a coup d’etat with the self swearing in of a president, an action executed by the national and international right outside the Venezuelan Constitution and laws.

“As constitutional president, Head of State, Head of Government, in fulfillment of my duties that I swore before the people to respect and enforce the independence, sovereignty and peace of the Republic, I have decided to break diplomatic and political relations with the imperialist government of the United States, they leave Venezuela, enough of interventionism, here there is dignity, here is a people that is going to defend this land”, he stressed.

Given this unprecedented event for the Venezuelan nation, the President announced that he will proceed to sign the Diplomatic Note so that within 72 hours, the diplomatic and consular corps of the US government accredited in Venezuela will leave the country.

Faced with this sovereign and constitutional decision, President Nicolás Maduro, called on the Bolivarian National Armed Forces (FANB) and the Venezuelan people to further unify the civic-military union before the attempted coup d’etat to be perpetrated against Venezuela to violate its sovereignty.

“I ask for the support of all the people of Venezuela in this sovereign and necessary decision. Venezuela is respected and we Venezuelans have to enforce this sacred land, neither coup, nor interventionism, Venezuela wants peace and democracy, progress and recovery. It is a serious irresponsibility of the government of the United States, of the extremists who have assaulted the fundamental power of the United States, to want to lead Venezuela to an internal, civil, violent confrontation”, he said.

He added that Venezuela “is facing a historic battle”, which is why he called on the people to “not let their guard down at a time when the right of the country’s own existence is being defended”.

Likewise, President Maduro emphasized the accusations he has been making against the United States that has orchestrated a coup-led operation aimed at the imposition and appointment of an extra-constitutional president, an action that was executed on Wednesday, January 23, by a member of the National Assembly. in contempt, Juan Guáido, who, on the sidelines of the law, was sworn in as interim president of Venezuela, being a function not included in the Constitution of the Bolivarian Republic of Venezuela.

“The gringo empire has activated many plans against the Bolivarian Revolution of the 21st century. We do not want to return to the twentieth century of interventionism and imperialism when a minority elite governed (…) The Venezuelan people say no to coup, not to interventionism”, he said.