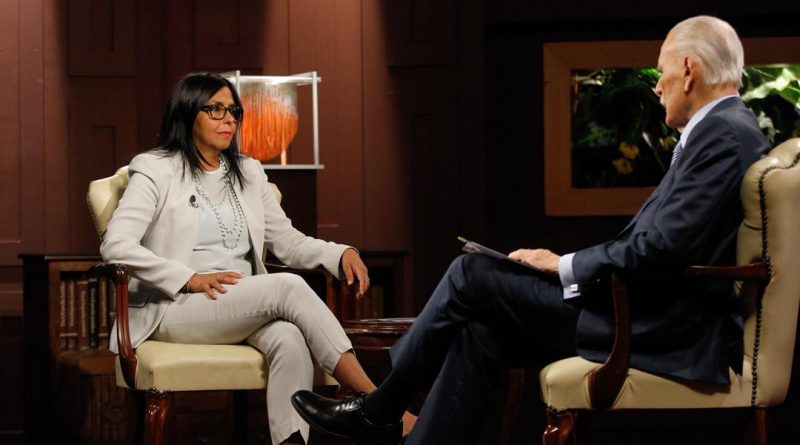 During an interview on the program José Vicente Hoy, broadcast by Televen, the executive vice president of the Republic, Delcy Rodríguez, highlighted the main objectives of the Head of State, Nicolás Maduro, for the constitutional period 2019-2025.

She stressed that the main objective of the National President is to defend and preserve the peace, stability and tranquility of the Venezuelan State.

The second fundamental objective is the Economic Recovery, Growth and Prosperity, Program “precisely to fight against all those factors that from Washington attack the economic and social welfare of our population”.

“Maintaining the social protection system to protect the most vulnerable sectors” is the third objective, “because without a doubt, the economic war, the economic aggression, in its different dimensions, directly attacks the citizen”, she said.

The Executive Vice-President indicated as the fourth element “something that the Venezuelan feel, and the President of the Republic feels aswell, and it is about the public function, the administrative function, to combat indolence, bureaucracy, corruption. They are fundamental elements that do not allow retrograde sectors to move towards a neoliberal plan”. Rodríguez stressed that with these objectives, Venezuela is heading towards the future.

The Bolivarian Government will continue working for dialogue

She also denounced the infamous support from the right to the statement of the Group of Lima, where they delivered the jurisdictional sea of ​​Venezuela, “where they committed the interests of our nation, where they supported what has been the position in dispute over the territory esequibo on the part of Guyana. It means, we have reached the point where some people, because they are not even political parties, dare to support that Venezuela delivers its jurisdictional territory where there is no controversy”, she said.

“It is about the democratic life of Venezuela what is at stake, it is about preserving our integrity as a people, as a country, so everything is put on the table, so that all channels of communication with any opposition sector are maintained, whether it is a political, economic or social opponent”.

She recalled the swearing in of the Head of State as Constitutional President for the new period 2019-2025, and stressed that “he is immediately governing. Just to have an example, this week he launched a plan of great relevance to the country, the Plan Venezuela Bella, which combines different missions and is also aimed at the direct welfare of citizens, to improve their habitat, their well-being”.

“Then, an important act with Venezuelan doctors. Little is said, but in 2018 there were important advances in the health sector, and based on these advances we go to higher goals in 2019, together with the people, because it is not just a government or an official, The whole Revolution means that every citizen is aware of the need that we have to work together, overcome all our difficulties together”, she said.

“Now, what is the government going to do? To govern, as the President has said, with maximum efficiency and effectiveness, always with the people, governing with the people, the people exercising the leading power given by the Constitution and the United Socialist Party of Venezuela defending the country, its sovereignty and the process of independence”.

“The Venezuelan right always has a catastrophic date”

“The Venezuelan extremist right, always leads its followers from failure to failure, because they always have a catastrophic date, a date where, as they sold it on January 10, was going to be the end of Venezuela, it was the end of the world”, the Vice President said.

Rodriguez said that in response to this, is the swearing in of the Venezuelan Head of State, Nicolás Maduro, as Constitutional President for the period 2019-2025, which had the majority support of all sectors with high social, economic and political connotation of Venezuela, as well as international guests.

While the act of investiture of the president of Brazil, Jair Bolsonaro, is the answer of what represents the failed policy of Washington, said the Executive Vice President.

“As President Nicolás Maduro has said, it was an unsuccessful policy of Bush, Clinton, Obama, and they are going through a thunderously failed path in this administration of President Trump, because they are repeating the same catalogs, the same scripts, and they are using the same national lackeys to attack the interests of Venezuela, the daily interests of the Venezuelan population”, she said.

The policy implemented by the Government of the United States, “through satellite governments, through this failed right, practically non-existent, is a failure, because we have reached such unworthy levels, how is that a Venezuelan political leader is directed from Bogota, or Lima, or directed from Washington? It is obviously shameful when they tell these politicians what they have to do”, said Rodriguez.

She also stressed that “the project of the Venezuelan right has been historically anti-national, but here the masks were removed and they were against the interests of Venezuela, it is directly an anti-national project, from its genesis to its most rude and barbarous development as we are living right now”.

However, she assured that “the parties that originally raised the flag of the United States, as Popular Will, as Justice First, today are not even parties, could not be validated as a party in the last electoral process, which shows them that it is a policy that has no future”.