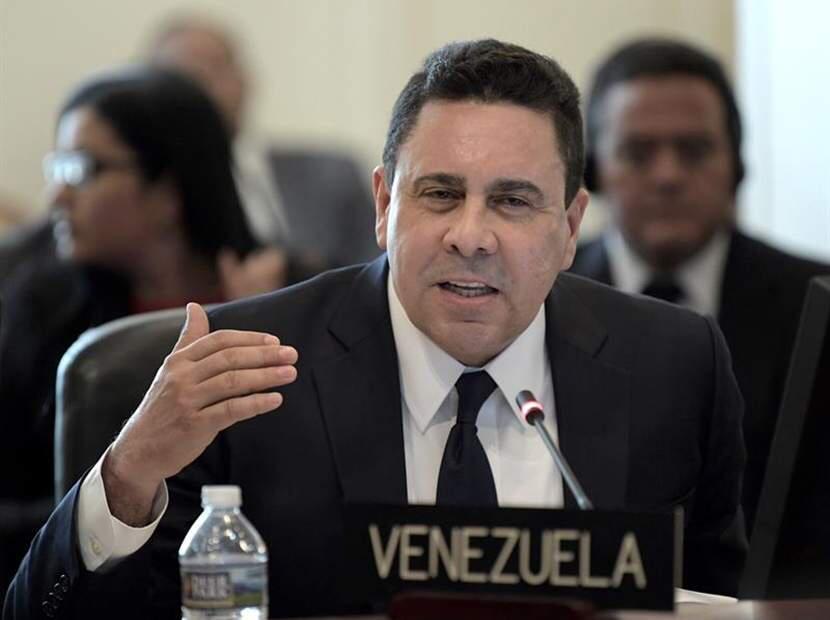 1. The Resolution presented today commits a legal nonsense, an abuse of power, a crime of aggression and a coup d’état. All with the purpose of promoting chaos and a foreign military intervention that would destroy not only peace in Venezuela but throughout the region. That resolution is a criminal plan that will bring pain and shame to satisfy the greed of a few.

2. This statement may seem exaggerated and must be explained, because I am sure that many States represented here know the danger that it means for Venezuela, and for themselves, that today is set such a dangerous precedent.

3. The first major problem with this Resolution is that it intends, without having the capacity to do so, to decide who is the legitimate ruler of Venezuela. Legitimacy is the voluntary acceptance of authority without the threat of the use of force. In the case of a country, the source of legitimacy is found only in the citizenship that is under the orders of the Government within that country, and never in foreign territory.

4. In democracies, the people are sovereign and the rulers only have the power that their people give them. Popular sovereignty means that the power resides in the people and they voluntarily surrender it to the rulers through voting.

5. How can a sovereign State accept that the legitimacy of its Government be determined by other States that have no authority over their internal affairs and that are legally their peers? Impossible!

6. What capacity to generate legitimacy does a foreign State have over a people that they do not govern? Obviously none. The question itself is absurd, meaningless. Only the nationals of a country can generate the legitimacy of their rulers, no one else.

8. But this delirium is also an abuse of power, those states know that they are inventing something that does not exist in international laws. They commit prevarication because they deliberately violate the law, twist it and manipulate it creating a fiction to destroy the sovereignty of our country.

9. In the case of Venezuela, the Constitution says in Article 5. “The sovereignty resides untransferable in the people, who directly exercise it in the ways provided in this Constitution and in the law, and indirectly, through suffrage, by the organs that exercise the Public Power. The organs of the State are emanated from popular sovereignty and to it, they are submitted”.

10. No foreign power can determine who holds the legitimate power in our country.

12. In the year 2005, the Government of the United States declared that it did not recognize the results of the elections for the National Assembly of Venezuela, arguing that the opposition had not participated. The effect of the condemnation for the Assembly was null, because the legitimacy of our elections is not decided in Washington.

13. In 2013, the Government of the United States did not recognize the results of the elections for the Presidency of the Republic, the effect of the condemnation of President Nicolás Maduro was null because the legitimacy of our elections is not decided in Washington. In 2018 the United States Government did the same and the result must be the same, in Washington the legitimacy of Venezuela’s power, is not decided.

14. The nonsense is so great that now a group of countries dare to declare some gentlemen who meet in Miami as the “legitimate” Supreme Court of Venezuela, the highest authority in judicial matters in our country, who decide the conflicts between the public powers and those who interpret the constitution. Do you believe that our people voluntarily accept the authority of those gentlemen in Miami? The question offends, but that is the supposed capacity that these countries believe they have over our people. They believe they can impose a puppet government on us from Miami. There is no international law that can sustain this, only the delirium of a group of outlawed States, which intends to trample on the will of the Venezuelan people.

15. “The power to administer justice emanates from citizens and is imparted on behalf of the Republic by the authority of the law”. To promote a group of usurpers in Miami as a Supreme Court is to commit a coup d’état against the Venezuelan Republic. This group of countries does it with impunity, recklessly. The same thing they want to do now with the National Assembly and not only delegitimize from the outside now relegitimize from the outside. Everything is as false as insulting, as primitive, as dangerous and criminal. their legal and political manipulation endangers the peace of Venezuela.

16. The second major problem of this Resolution is that it wants to bend the will of the Venezuelan people through coercion. Article 20 of the OAS Charter states: “No State may apply or encourage coercive measures of an economic and political nature to force the sovereign will of another State and obtain from it advantages of any kind”.

17. Every year, the United Nations condemns coercive measures as violating human rights, national sovereignty, the self-determination of peoples and every rule of international law. However, the Resolution against Venezuela openly proposes punishments and aggressions aimed at fragmenting and weakening the three pillars of every State, such as its population, its government and its territory.

18. The United States has proposed a program of economic suffocation against our people with the purpose that collective suffering manifests itself in social chaos. This criminal aggression has the support of the Secretary of this Organization and of a group of countries.

19. The maximum damage caused is called “humanitarian crisis” and they pretend to appear as saviors of a situation created by themselves. The process of economic destruction is celebrated in Washington as a triumph and they use the Venezuelan people as a hostage to break the will of our government.

20. In the case of the humanitarian crisis, the resolution uses it as an excuse to not recognize President Maduro. And now I ask you: two days ago the President of the United States, declared a humanitarian and security crisis on the southern border of his country, to justify the construction of a wall. Is this Council going to accept that the governments of the south of the border are unknown, because the President of the United States said so? They do not understand that the language used against Venezuela is the same used against Latin Americans to discriminate and humiliate them. It is a case of divide and conquer and that is what we have come to denounce.

21. The process of demolition of the Republic goes through all clandestine operations of subversion that attempt to produce a violent military coup in Venezuela. The New York Times denounced September 9 how the United States government met on several occasions with the Venezuelan military, to overthrow the constitutional government of Venezuela. President Trump even stated publicly that the United States would support a coup in Venezuela.

22. The calls for a coup d’état are echoed by the Secretariat of this Organization, which faithfully repeats the instructions issued by the United States Government, thus contravening all international law, its obligation to work for peace and its integrity as an international official.

23. The International Court of Justice ruled in 1986 that there is no general right of intervention in international law to support political opposition within another state. Even to recognize as a legitimate representative of a country only one sector of the opposition, constitutes a violation of the principle of non-intervention in international relations. The Court decided this regarding to the case of the aggression committed by the United States against Nicaragua. Today they want to do the same in Venezuela and also in Nicaragua.

24. The attempted assassination carried out on August 4, 2018, was as well-known and criminal, as ignored by this Organization, and its promoters are protected in the territory of the United States.

25. It is a whole strategy to dissolve the personality of the State, to fragment the public powers, to weaken the governability of the nation and to destroy social peace. It is the strategy of chaos and destruction.

26. Likewise, Article 19 of the OAS Charter affirms: No State or group of States has the right to intervene, directly or indirectly, and for whatever reason, in the internal or external affairs of any other State. The previous principle excludes not only armed force, but also any other form of interference or tendency to threaten the personality of the State, the political, economic and cultural elements that constitute it.

27. To this machinery of death and destruction has joined the General Secretary as part of the industrial-military complex that has the war as a business for the sale of arms and the dispossession of the natural resources of Venezuela. It is a macabre plan that serves to benefit the interests of the largest corporations in the United States such as Exxon Mobil. It is the same war plan for oil used in Iraq and Libya.

28. The economic asphyxia, the fragmentation of the unity of the State and the pretension to divest natural resources are the material bases of the legal atrocity that this resolution represents. It is not about democracy or peace, it is about the destruction of popular and national sovereignty, the annulment of the independence of the nation and the imposition of a tutelage through puppet governments without roots in our people and territory. .

29. Finally, we are on the verge of a new phase of aggression that attempts to justify the imposition of a government from abroad which calls for a military coup to present then the authors and instigators of the crime as the saviors who will use their armed forces to prevent the war in Venezuela.

30. With the excuse of saving Venezuela its actions are aimed at destroying its population, State and territory. We are on the verge of a situation similar to that of 1965 when the OAS served as an instrument to invade the Dominican Republic. What a shame!

31. We call on the States of the region to understand the danger of supporting the disintegration of the Venezuelan State, the application of illegal coercive measures that violate the human rights of our people and the threats of war that irresponsible traffickers of Death do with impunity. Today is Venezuela tomorrow is Nicaragua, then any of you.

32. We call on the people of Venezuela to remain united in this dangerous hour, only national unity can defeat the most brutal aggressions in the last hundred years. We call on all Venezuelans, of all parties, of all faiths to defend our sovereignty, our territory, our independence and our right to peace.