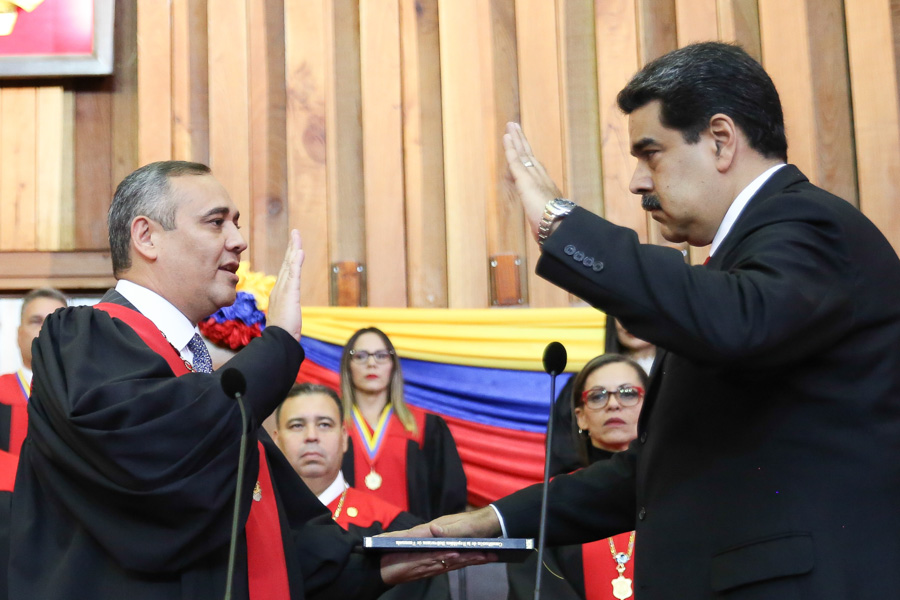 This Thursday, the president of the Bolivarian Republic of Venezuela, Nicolás Maduro, took an oath before the Supreme Court of Justice (TSJ), for the new constitutional period 2019-2025.

The activity was directed by the president of the TSJ, Maikel Moreno, who highlighted that the Head of State was elected as president of the Bolivarian Republic of Venezuela in a free and sovereign electoral process.

“On May 20, 2018, through the voting tool, the people deepened democracy and defeated those who sought to destroy it, this is how Nicolás Maduro was elected as president of the Bolivarian Republic of Venezuela”, Moreno said.

He stressed that the oath taken by the President Maduro, for the new mandate 2019-2025, before the Supreme Court, is carried out in accordance with article 231 of the Constitution of the Republic.

Likewise, Moreno assured that the National Public Power and, especially the Judicial Power, has the duty to guarantee the stability of our country and the actions of its institutions.

“The swearing of an oath is not a mere dispensable formality. Therefore, the act is a tradition that seeks the ratification of the commitment to ensure compliance with the Law”, he said.

“In this way, being the citizen Nicolás Maduro present in the Supreme Court of Justice, it is time to take the oath as constitutional president of Venezuela for the period 2019-2025”, he added.

In that sense, the Head of State swore, “for the legacy of our beloved Commander Chávez, for the children of Venezuela, that I will not rest my arm or repose my soul to defend our Homeland”.

Judge Maikel Moreno, placed the presidential band to the Head of State and made Nicolás Maduro officially as President of the Bolivarian Republic of Venezuela for the new sexennium 2019-2025.

Subsequently, the National President signed the oath statement, in addition to the presidents of the Public Powers and the National Constituent Assembly (ANC).

For his new presidential term, Maduro was elected with 67.84% of the votes of the people, which translates into 6 million 248 thousand 864 voters, in the presidential elections held on May 20, 2018.