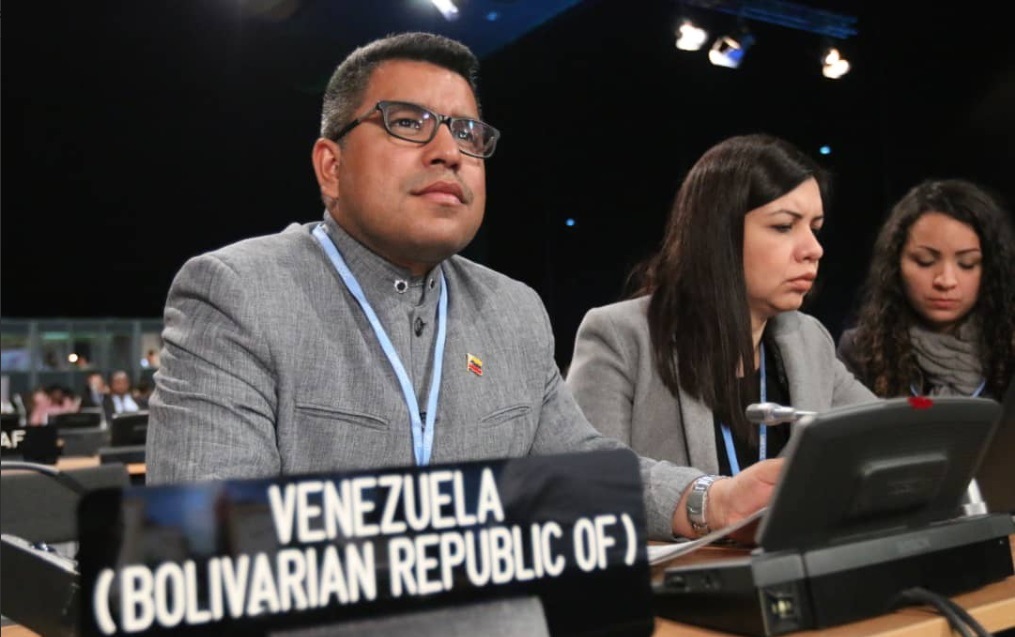 Venezuela promotes adoption of the Paris Agreement in COP24

The Bolivarian Republic of Venezuela assumes full commitment to climate change and the multilateral system established by the United Nations Framework Commission on Climate Change, the Kyoto Protocol and the Paris Agreement, as expressed by the People’s Power Minister for Ecosocialism, Heryck Rangel, during his speech at the UN conference on climate change in 2018 (COP24) in Katowice (Poland).

The Venezuelan standard-bearer pleaded for “substantive advances that lead to the adoption of efficient mechanisms for the implementation of the Paris Agreement, without abandoning the principles of the Convention, especially the principle of common, but differentiated responsibilities”.

Rangel warned that climate change threatens human existence by impacting transversally all the issues of social life. “The ten most important economies on the planet are responsible for 72% of carbon dioxide (CO2) emissions, while the 100 poorest countries only generate 3%.”

He emphasized on climatic alarms, because currently, the temperature has increased 1º centigrade comparing it with the pre-industrial era, according to scientific reports, 12 years remain to avoid a “climate chaos”.

“From Venezuela, responsible for 0.48% of global CO2 emissions, we want to reaffirm the commitment of the preservation of life on the planet and the salvation of the human kind. Today 64 million hectares are protected, 68% of the terrestrial area and 4% of marine areas, “he said.

He said that the discussion on climate change is at a crossroads, “or allow the voracious accumulation of a few or guarantee the right to life of all”.

The head of the Venezuelan delegation denounced the harassment and political, economic, mediatic and diplomatic persecution exercised by the government of the United States against Venezuela and the Constitutional Government of President Nicolás Maduro Moros.

The ecosocialist minister mentioned that Venezuela is in a constituent process of democratic election of the guarantors of the rights of Mother Earth, where the nation has taken measures for mitigation and sustainable development.

“Today Venezuela has the forest, the largest rainforest national park in the world, the Caura national park”, he stressed.

He also highlighted that the Great Housing Mission Venezuela is an example of adaptation to the policies that have contributed in the fight against climate change, with the construction of 2.4 million homes for families who were in a situation of vulnerability and high risk.