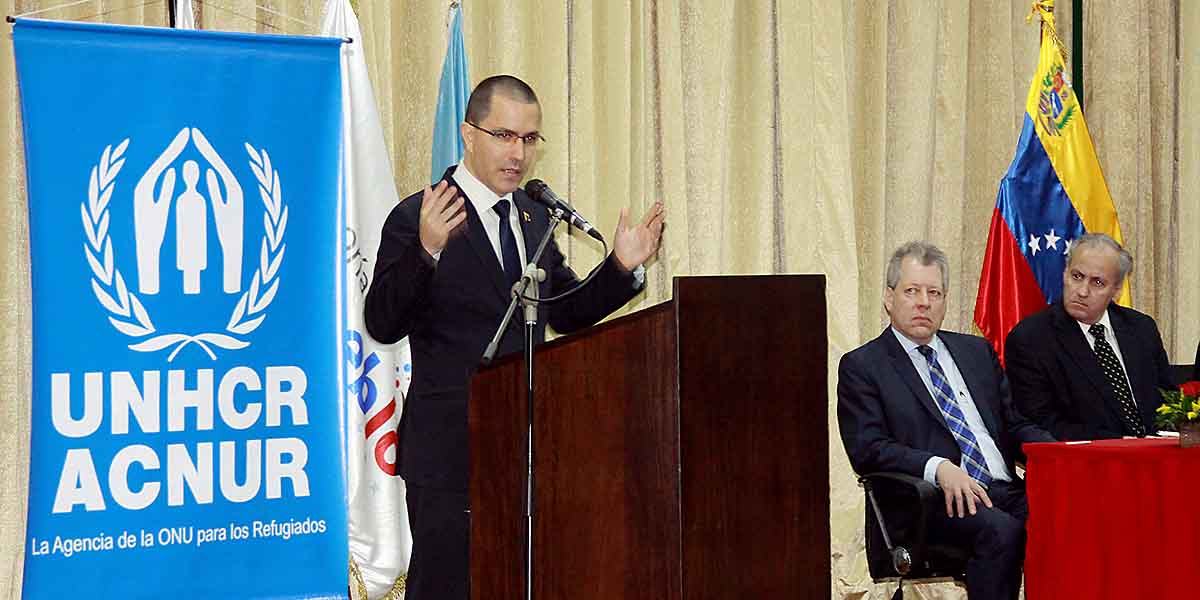 On Thursday, the foreign minister of the Bolivarian Republic of Venezuela, Jorge Arreaza, participated in the ceremony of recognition of refugee status to 120 citizens from the Syrian Arab Republic, the Sahrawi Arab Democratic Republic and the Republic of Colombia.

The ceremony that took place at the theater facilities of the People’s Power Ministry for Defense was attended by Peter Grohmann, resident coordinator of the United Nations system; Malthew Crentsil, representative of the United Nations High Commissioner for Refugees (UNHCR); Samir Bashour, Syrian consul.

To start the activity, the glorious notes of the national anthem were sung and later a group of singing girls delighted the audience with the interpretation of the song Venezuela.

In his speech, FM Arreaza said that the certificate granted to protected citizens, integrates them as part of Venezuelan society, contrary to what happens with Venezuelan migrants in other latitudes who are victims of xenophobia and abuse.

He also referred to the increase of murders of leaders in Colombia who are executed for defending their social and human rights.

“In current Colombia they kill two social leaders per day, in current Venezuela you are protected, which is why we are avoiding circumstances that you experienced in your countries”, he said.

Next, the president of the National Commission for Refugees, Juan Carlos Alemán, stressed that the Organic Law on Refugees represents “a materialized dream of Commander Hugo Chávez” who launched this instrument not only to comply with international commitments but also because his humanist spirit that knew the needs of the people, led him to extend a helping hand to those who needed it.

“In spite of the difficulties and the difficult moment that we are living motivated by the insistence of the imperial powers that claim to take over our resources, today we say that the truth of Venezuela is that many people are in our country because they believe in it”, emphasized Alemán.

He reported that Venezuela to date protects 297 refugees who left their countries of origin, in search of protection and stability for their families.

He also noted that despite the hard work carried out by Conare, 112 applications from citizens seeking refuge in Venezuela are still pending.

For his part, Peter Grohmann, resident coordinator of the United Nations system, stressed that while it is true that the refugee situation is a difficult status, Venezuela is a country that has sheltered thousands of citizens who flee their countries to find stability .

“It is not easy to be a refugee in another country, many of the people who are here have left everything behind and have had to start over in another country. Today’s activity seems simple for some, but it is an important step to give stability to the brothers and sisters who have gone through difficult circumstances and had to flee in search of protection”, he said.

After Grohmann’s intervention, FM  Jorge Arreaza, on behalf of the Bolivarian Government and President Nicolás Maduro, proceeded to deliver to all the refugee citizens in Venezuela, the certificates of recognition, legal process by which the governments attached to the UNHCR, determine whether a person seeking international protection is considered as a refugee according to established international standards.

Among the refugees who received this certificate are the citizens Afaf Ealia from Syria, Gilberto Torres and Yolanda Durán from Colombia who join the rest of the 117 refugees to whom the aforementioned document was delivered.