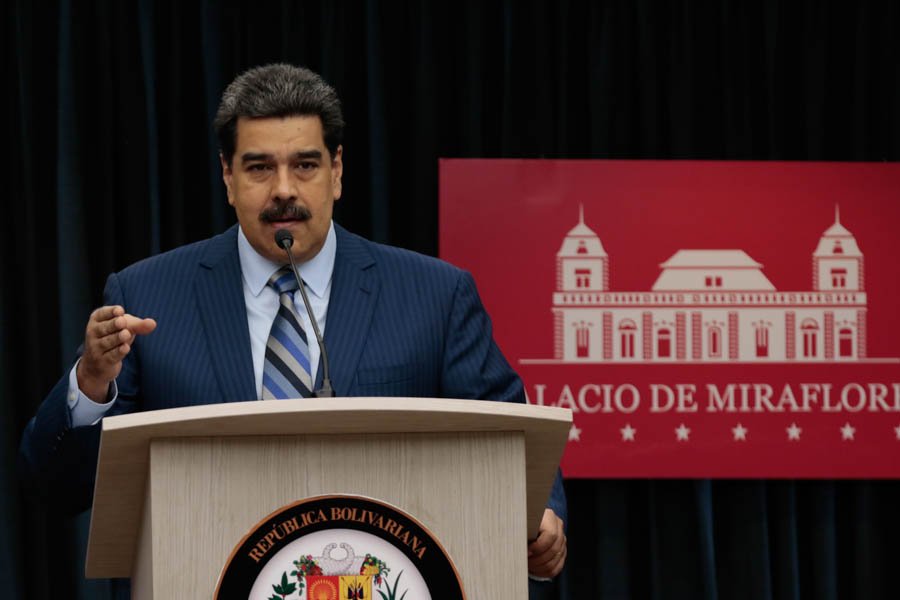 In a press conference with national and foreign media, the President of the Bolivarian Republic of Venezuela, Nicolás Maduro, offered a balance of the government’s management and made denunciations that point to the destabilization of the National Government by the United States and Colombia government.

During his speech at the press conference held at the Miraflores Palace in Caracas, the Head of State indicated that the conspiratorial plans against his government are focused on two lines such as hiding the truth about Venezuela and accusing the National Government typing it as a dictatorship to generate a spiral of disinformation, conspiracy and plot that triggers destabilization.

This spiral of disinformation has been accompanied by an international media campaign in which 90 US media outlets, President Maduro said, have published more than 4,142 negative news stories about Venezuela.

“They tried to assassinate me and impose a de facto government. They are seeking military intervention in Venezuela to impose a transitional council. All these conspiratorial plans are being organized from the United States by John Bolton who is Donald Trump’s security adviser”, said the President.

Against this background, President Maduro assured that the assassination perpetrated against him last August was planned and supervised from the United States and launched by Colombia, countries that protect those responsible for this act and to whom Venezuela has requested in repeatedly ocations, the extradition of the intellectual authors of the assassination.

As part of these conspiratorial plans, Maduro denounced that more than 700 mercenaries are currently being trained in the north of Santander and in the air base of Ptolemaica, whose objective is to generate false flags and simulate attacks by uniformed Venezuelan forces against the military units in order to intensify and justify the growing of violence in the Caribbean nation.

“The G8 is part of Bolton’s plan that is made up of mercenaries that will carry out actions at any time to destabilize the country and generate an growing of violence” he said.

The Chief Executive said that he had information on the training of commando force groups in US territory, who would eventually be in charge of an intervention in Venezuela, for which the US government also increased the secret party that is aimed at destabilizing the institutionality and the Venezuelan people.

Before this context, Nicolás Maduro urged the Bolivarian National Armed Forces (FANB) to be attentive to the destabilizing events that aim to disrupt national peace and the Venezuelan democratic government.

“The opposition of the world believes that Venezuela has no one to defend it. Let them never make mistakes, because we are going to give them a lesson in dignity that they will not forget in a thousand years, wherever they may be”, he said.

He also informed the country that he gave instructions to the Venezuelan Foreign Ministry to summon the Chargé d’Affaires of the United States so that he could rethink his functions in Venezuela and cease the interventionist policy against the Homeland of Bolívar.

The Head of State did not rule out to start formal relations of respect with the United States government to intensify dialogue and peace between the two nations.

“The basis of a civilized society is diverse dialogue, peace. I reaffirm my call to fruitful dialogue”, he said.

In economic matters, Nicolás Maduro indicated that for the year 2019 an investment fund was created for 1,000 million dollars to increase oil production. He also confirmed that $ 5 billion has been allocated to “adjust oil facilities and take a jump in global production” of the country and raise the production for Russia in the Venezuelan oil fields to 1 million barrels per day next year.