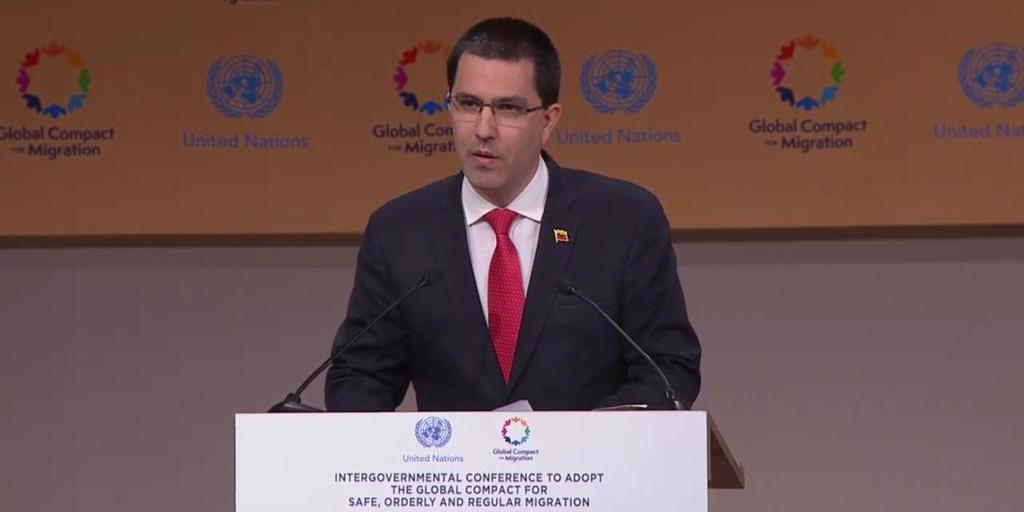 The Foreign Minister of the Bolivarian Republic of Venezuela, Jorge Arreaza, acknowledged the positive contributions of the Global Compact for Secure, Ordered and Regular Migration adopted this Monday by more than 150 countries in the city of Marrakech, in Morocco, which is based on cooperation on migration.

However, he warned that its application must be strictly adhered to the principles and purposes of the United Nations, and urged to avoid any attempt to turn it into an intervention tool that can be invoked by some States.

“No manipulation and selective interpretation of its objectives should be accepted, much less flexibilize its postulates, to seek the support of countries that today reject the Covenant and withdraw themselves from this just initiative. It is the first major multilateral effort to prioritize migrants starting from their dignity, to be recognized as subjects of law, as agents of development and defend those guarantees against anyone who seeks to sully their contributions, is the fundamental”, emphasized the diplomat in his speech.

In this context, and after pointing out inequality and unilateral economic aggressions as causes of human mobility in the world, he condemned the fact that some political and economic sectors intend to use the immigrants present in their countries as a pretext to evade the challenges they must confront in certain areas of their internal policy.

“Racist and xenophobic ideas and a tendency to criminalize migration, attacking the most basic human rights of migrants (…) To justify through national laws the imprisonment of children in cages and separating them from their parents, while trying to undermine, with legal contraptions, the universally recognized principle of primary consideration for the best interests of the child is an enromous insult to the international community”, he denounced.

Venezuela: a country that receives migrants

In his speech, the People’s Power Minister for Foreign Relations recalled that Venezuela has been a country that has historically welcomed migrants from all over the world, including countries in Europe, Asia and the Middle East, and especially in Latin America and the Caribbean. In this regard, he stressed that only from Colombia have more than five million people emigrated to the Bolivarian Republic.

“The migrants have settled by millions and have developed a prosperous life in Venezuela, especially the last two decades. They were never victims of xenophobia or discrimination. On the contrary, they have enriched our culture, society, and economy, and today and always will continue to be welcomed and guaranteed their social rights”, he said.

In parallel, FM Arreaza indicated that as a consequence of the unilateral coercive measures that the United States and other countries are currently applying against the economy and other areas in Venezuela, an atypical mobilization of Venezuelan nationals has been generated, particularly in neighboring countries.

“Some governments and multilateral organizations are celebrating, exaggerating numbers, in an unusual scramble for resources with the excuse of serving Venezuelan migrants”, he said. In that sense, he criticized the opportunism of the Colombian State based on the situation of a group of migrants from Venezuela.

In the same vein, he referred to the histories of exploitation and discrimination that many of his countrymen have suffered in countries of the region, from where more than 10 thousand 500 people have returned through the Plan Vuelta a la Patria, a repatriation program unpublished conceived by President Nicolás Maduro.

FM Arreaza also lamented the refusal of some States to accede to the Global Compact for Secure, Ordered and Regular Migration, alleging that it limits the freedom of expression enshrined in their Constitution aiming to keep the promotion of xenophobia, racism, hatred, discrimination and intolerance towards migrants.

“It is precisely these countries that sully the national sovereignty of independent states with interventions, promotion of war, extraterritorially applying their laws and economic blockades to coerce and distort the will of free peoples, promoting warmongering agendas and seeking to force convenient changes of governments”, complemented.