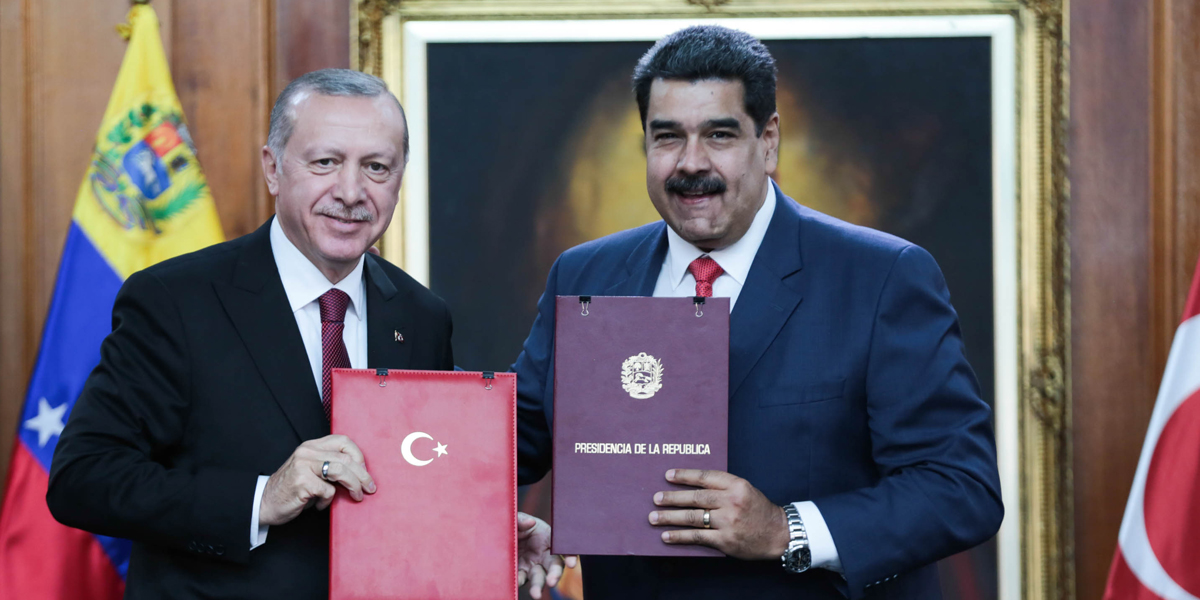 Venezuela and Turkey subscribe agreements of economic and commercial cooperation

In order to strengthen strategic alliances of cooperation and brotherhood between the Bolivarian Republic of Venezuela and the Republic of Turkey, the leaders of both countries, Nicolás Maduro and Recep Tayyip Erdoğan, signed a series of agreements in the afternoon in matter of defense, mining, energy, tourism, commerce, agriculture and hydrocarbons.

In a formal ceremony held in the Sol del Perú hall, in the Miraflores Palace, the Heads of State of both countries proceeded to sign the following agreements:

Letter of intent between the People’s Power Ministry for Defense and the Defense Industry Presidency of the Republic of Turkey, in matters of Defense.

Memorandum of understanding on mining cooperation between the People’s Power Ministry of Ecological Mining Development of the Bolivarian Republic of Venezuela and the Ministry of Energy and Natural Resources of the Republic of Turkey.

Cooperation agreement for the establishment of the bilateral business council between Banco de Comercio Exterior (Bancoex), the People’s Power Ministry of Foreign Trade and International Investment of Venezuela and the Council of Foreign Economic Relations of Turkey.

Political declaration between the governments of the Bolivarian Republic of Venezuela and the Republic of Turkey.

Maritime transport agreement between the Bolivarian Republic of Venezuela and the Republic of Turkey.

Agreement between the Bolivarian Republic of Venezuela and the Republic of Turkey to avoid double taxation and prevent tax evasion in terms of income and wealth taxes.

After the activity was completed, President Erdoğan was awarded with the Order Liberators of Venezuela in its first class and the replica of the sword of the Liberator Simón Bolívar was delivered by President Nicolás Maduro.

Gesture in recognition of the political and social commitment with the Turkish people. “In a very special way I give to you the replica of the sword of the Liberator Simón Bolívar, which was given by the people of Peru as his Liberator. This I give as a sign of friendship and eternal loyalty between the people of Turkey and the people of Venezuela”, said the Venezuelan Head of State.

Similarly, President Maduro commented on the projections that have been made for bilateral economic development for the last 12 years.

“What is coming for the year 2019, 2020 and 2022, I have spoken with President Erdoğan and we have seen our development until 2025-2030. The development of joint investments, of the powerful economic base”, explained the President.

In that sense, he added that “we will continue to develop prosperous and transparent relationships. Venezuela in our Latin American and Caribbean region has an impressive leadership and we are the presidents of the Movement of Aligned Countries”.

For his part, the Turkish President expressed his gratitude and complacency with the distinction. “This decoration and also the replica of the sword of the Liberator Simón Bolívar will be for me an eternal memory between our countries and peoples”, said President Erdoğan.

While detailed that “in the presidency we have about 50 swords and decorations, and I am very happy to say that now I have one of the Liberator Simón Bolívar”, Erdoğan added.

It should be noted that the bilateral relations between Turkey and Venezuela were signed since 1999 with the arrival of the leader of the Bolivarian Revolution, Hugo Chávez, as president, as part of the multicentric and pluripolar policy promoted for the development of countries and peoples. the framework of respect for sovereignty and non-foreign-intervention.