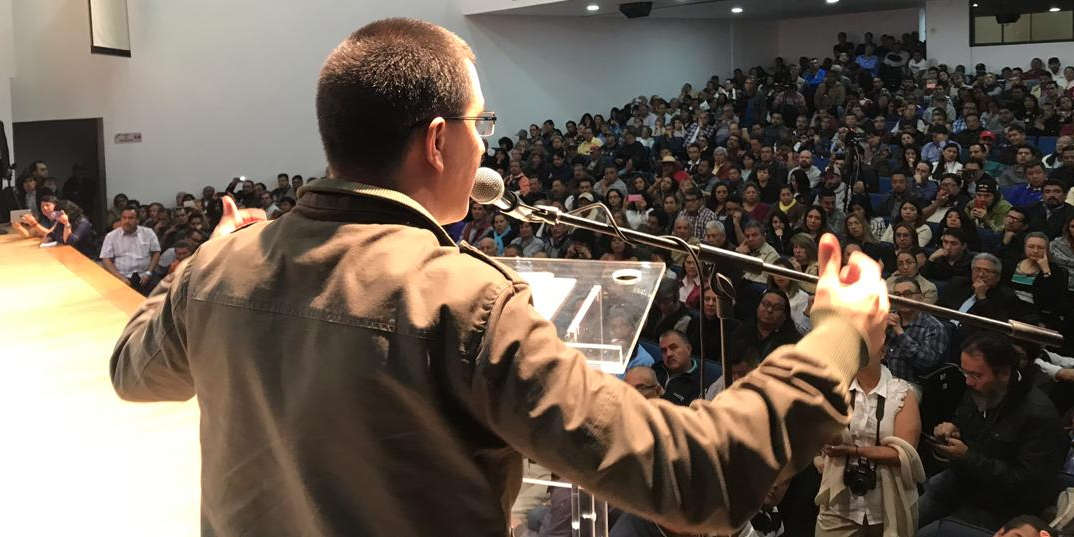 This Sunday, the Mexican Working Class held an act of solidarity in support of President Nicolás Maduro and the Venezuelan people from the Ernesto Velasco Torres Auditorium in Mexico.

The meeting was chaired by the Foreign Minister of the Bolivarian Republic of Venezuela, Jorge Arreaza, and the People’s Power Minister for Culture, Ernesto Villegas, where in the name of President Nicolás Maduro they sent a message of unity, solidarity and struggle to the government and people from Mexico.

The People’s Power Minister for Foreign Relations, Jorge Arreaza, stressed that “Commander Hugo Chávez placed President Nicolás Maduro because he is of the working class, and he is the one who must lead the destiny of the Bolívar Homeland to achieve democratic socialism. The Mexican working class is an example of resistance against the neoliberal governments, we have seen in their luminous look the hope with the certainty that through fighting, they will be free. The people will not only have a president but a self-govern, the people made government themself, that is the destiny of Mexico with Andrés Manuel López Obrador”, he said.

On the other hand, the Venezuelan Foreign Minister made a call to not forget the cause of the 43 normalist students, who were arrested and disappeared since 2014 in Ayotzinapa.

“We are with you, we demand justice for your family members and that never happens in Mexico a massacre again”, said Minister Arreaza while embracing on behalf of President Maduro and all of Venezuela the mother of one of the 43 missing students.

The Head of the Venezuelan Foreign Portfolio, took the opportunity to send a message to the Mexican people emphasizing that “when independence is based on inexorable values ​​there is nothing that can defeat it. There will be victories, setbacks, there will be stalemates but the victory will be fully achieved if there is unity”.

Finally, he stressed that in Venezuela there is no humanitarian crisis, there is an economic crisis based on an economic blockade imposed by imperialism”, says the independent expert of the United Nations, Alfred De Zayas, in his report. of humanity”.

In turn, he added that the people and government of Mexico can count on the Bolivarian Revolution “as much or little we could have, is also the Mexican people”, concluded Arreaza.