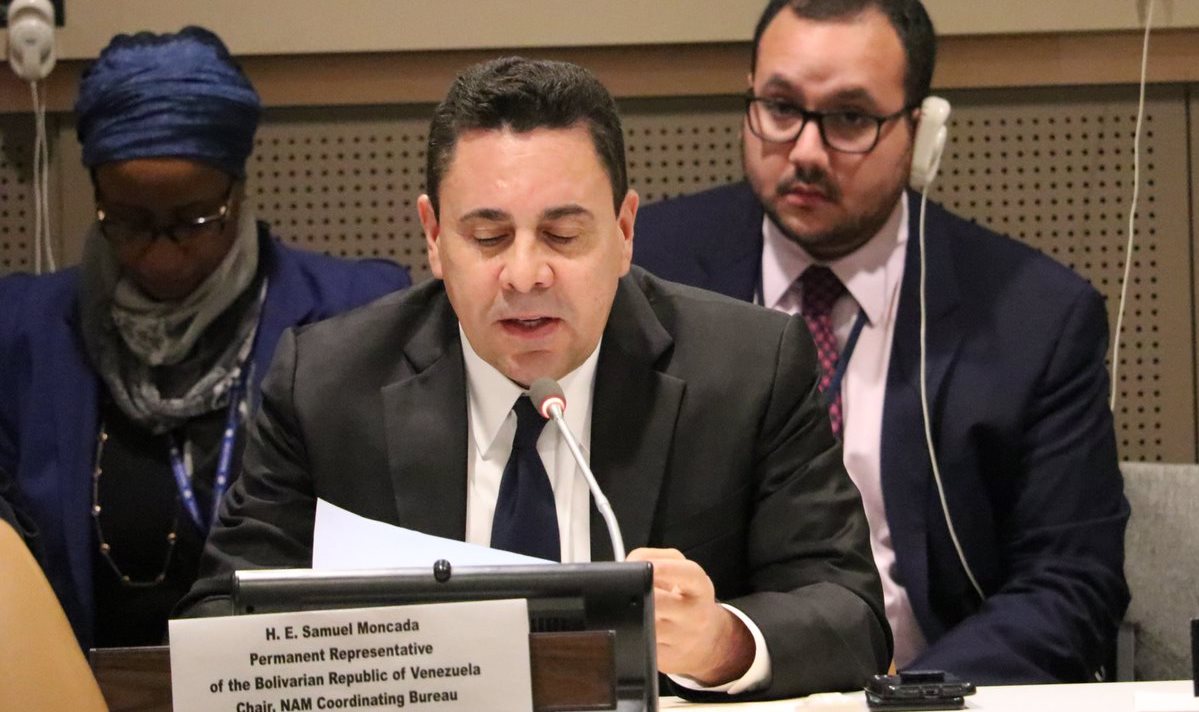 In order to strengthen and promote the integration and the principles of the Charter of the United Nations, the Bolivarian Republic of Venezuela, in its capacity as President of the Movement of Non-Aligned Countries (NAM), presented a Draft Resolution on the establishment of the 24th April as “International Day of Multilateralism and Diplomacy for Peace”.

During the monthly meeting of the Asia-Pacific Group, which is currently presided by Palestine, and the African Group, chaired by Morocco, Ambassador Samuel Moncada presented to the representatives of the Member States of each regional group the draft resolution of the NAM, an initiative that emerged by the Presidency of the Movement and that was reflected in the Political Declaration adopted unanimously during the Ministerial Meeting on September 26 on the margins of the high-level segment of the 73rd Session of the UN General Assembly, and in which the commitment of the NAM in favor of the promotion, preservation and strengthening of multilateralism was reaffirmed.

The adoption of the Resolution, which would be adopted by the General Assembly of the United Nations, the normative and deliberative body of the UN, and the only one that has full legitimacy in political decision-making given its universal representation, would serve to promote the values ​​of the United Nations and to reaffirm the faith of our peoples in the purposes and principles enshrined in its founding Charter, to strengthen the validity of multilateralism and the norms of international law, to reach the common goal towards the consolidation of a lasting and sustainable peace in the world, especially through diplomacy.

In his speech, Ambassador Samuel Moncada alluded to the words of the General Secretary of the UN, António Guterres, who has affirmed on multiple occasions that “the United Nations must, first of all, be an instrument for the increase of diplomacy for the peace”, while stressing that this is a concrete proposal presented by the NAM to advance in the achievement of a peaceful and prosperous world, as well as to avoid the emergence and intensification of conflicts.

On April 24, 1955 in Bandung, Indonesia, was held the historic Afro-Asian Conference, the most immediate antecedent of the formal birth of the Movement of Non-Aligned Countries (NAM), and in which the Founding Fathers of the Movement adopted the 10 Principles of Bandung which, to date, constitute the goals and objectives of the Movement, while serving as a guide for non-alignment policies and constituing the main criterion for the admission of new members.

Hence this date, charged with a significant importance for all the Member States of the NAM, is proposed to commemorate and celebrate annually the “International Day of Multilateralism and Diplomacy for Peace”.