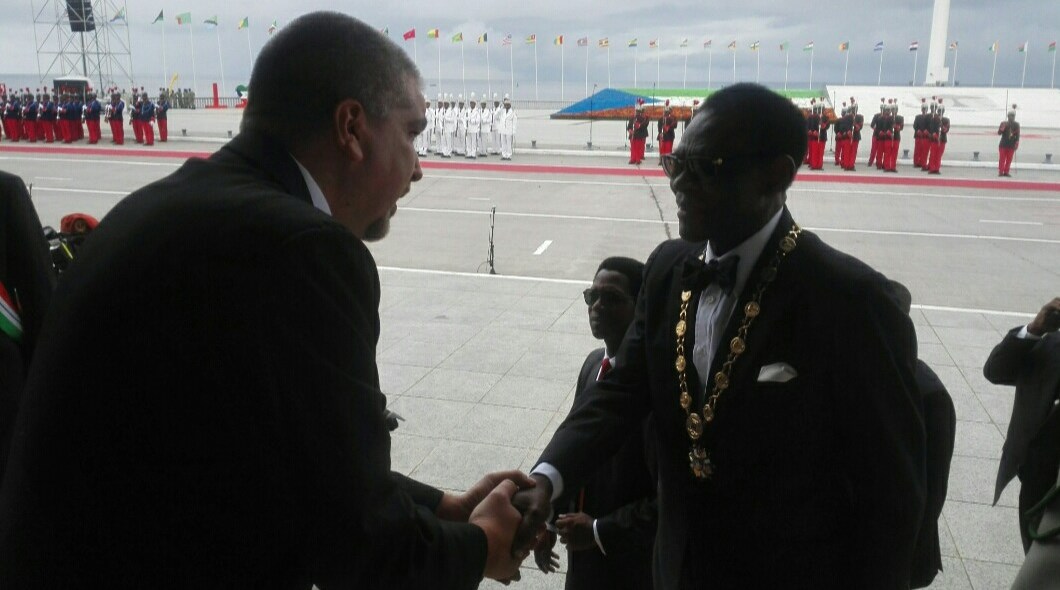 With the firm intention of promoting South-South cooperation, the Vice-minister for Africa of the People’s Power Ministry for Foreign Relations of the Bolivarian Republic of Venezuela, Yuri Pimentel, visited the Republic of Equatorial Guinea on behalf of the venezuelan Government and People. An invitation from the african country to celebrate the 50th anniversary of its independence.

The agenda of the venezuelan diplomat in Malabo began last Thursday, when he held an important meeting with the Chancellor of the Republic of Burundi, Ezechiel Nigibira.

In this meeting, the venezuelan side ratified its support for the efforts of the Burundian government in strengthening its institutional capacity, for the preservation and respect of its sovereignty.

At the same time, the vice-minister for Africa raised the need to move towards an air connection between both continents, which encourages the emergence of new ties of friendship and cooperation in various areas, mainly commercial.

For his part, Foreign Minister Nigibira expressed to Venezuela the unrestricted support of the Republic of Burundi, and extended an invitation to the Bolivarian Republic to advance the establishment of trade relations.

In parallel, they agreed to coordinate joint actions and efforts in the face of the unilateral coercive measures imposed by the centers of world power.

A civic-military parade for 50 years of independence

The following day, on October 12, the venezuelan Vice-minister attended the commemorative civic-military parade for the 50th anniversary of the independence of the Republic of Equatorial Guinea, which was held in the city of Malabo.

During the historic event, the diplomat held an important meeting with the president of the African nation, Obiang Nguema, to whom he conveyed the message of congratulations sent by President Nicolás Maduro on the occasion of the date.

After the ceremonial events, Vice-minister Pimentel met with the Vice President of the Republic of Zimbabwe, Kembo Mohadi. The parties ratified the will of their governments to strengthen cooperation relations in education, mining and health, for the benefit of both peoples.

Vice President Mohadi expressed his support for Venezuela and condemned the unilateral coercive measures imposed by the government of the United States and the European Union on the Caribbean nation.

The venezuelan diplomat, meanwhile, thanked the support of Zimbabwe to the Bolivarian Republic in the forums of international political agreement, and explained the economic and social reality of the South American country.

During his visit to the Republic of Equatorial Guinea, the Vice-minister of Foreign Relations for Africa held an important meeting this Saturday with Alfonso Osa Nguema, General Secretary of Civil Aviation of that african nation.

The meeting dealt with various topics of common interest, mainly the direct connection between both countries and the exploration of educational cooperation agreements in the field of aeronautics.

Subsequently, the venezuelan diplomat met with the Minister of Culture, Tourism and Artisanal Promotion of Equatorial Guinea, Rufino Blanco, to whom he extended the invitation to participate in the next International Tourism Fair of Venezuela 2018 (Fitven), scheduled to be held on the 22nd to November 25 on the island of Margarita, and the International Book Fair of Venezuela 2018 (Filven), which will take place between November 8 and 18 in Caracas.

“We came to reiterate the deep friendship that exists between our peoples and between our governments, since the time of Commander Hugo Chávez and now with President Maduro; an extraordinary relationship with President Obiang and with the entire government of Equatorial Guinea”, the Vice-minister said at the end of the talks.

In this regard, he highlighted the execution of several joint projects and the will of Caracas to keep expanding its cooperation relations with Malabo. In this case, at the level of training in the cultural and tourist field.

“It’s a matter of helping each other (…) It’s the need for South-South cooperation, we brothers understand each other better”, he added.

The meeting with the Minister of Culture, Tourism and Handicraft Promotion of Equatorial Guinea preceded the meeting held by Vice-minister for Africa with the Ombudsman of the african nation, Marcelino Nguema, during which the Equatorial Guinean official empathized with Caracas before the Situation of attacks and disrespect by foreign powers.

After these meetings, the venezuelan diplomat was received by the Chancellor of the Republic of Equatorial Guinea, Simeon Oyono; and by the vice minister of Commerce of the african country, Domingo Mba Esono, with the common vision of strengthening diplomatic relations and economic and commercial cooperation between both nations.