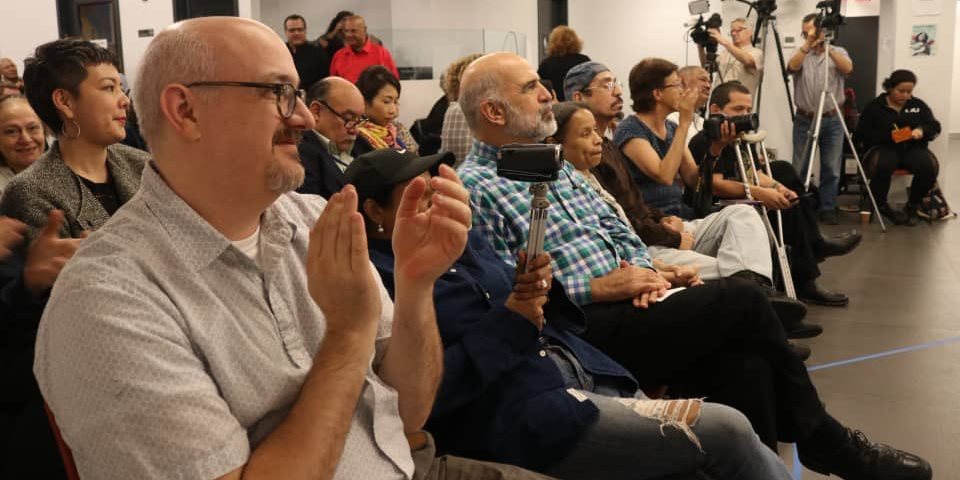 US social movements express support to Venezuela from New York

The People’s Forum of New York hosted an assembly on Thursday with the Bolivarian Republic of Venezuela, which brought together a group of US social movements interested in knowing in detail the social progress that the South American country has made during the last 19 years.

In this important space for reflection – in which Commander Hugo Chávez, South African leader Nelson Mandela and North American activist Martin Luther King were honored – the organizations expressed their support for the venezuelan people who wage a historic battle for their right to self-determination .

“From New York we send our support and solidarity to the people of Venezuela, understanding that we are brothers and sisters, and that within the revolutionary process there have been many acts of international solidarity, particularly in the city of New York”, said Claudia de la Cruz, cultural director of the People’s Forum.

Specifically, the director made reference and thanked the contributions of the Bolivarian Republic under the leadership of Commander Hugo Chávez to the New York community of the Bronx, after a visit of the then venezuelan leader to that town in 2005.

“We give thanks for that solidarity from town to town and for the Bolivarian Revolution that is a revolution of the people”, she added.

Similarly, the Reverend Danilo Lachapel expressed his solidarity to the venezuelan Government and people, and condemned Washington’s hostile policy on Caracas.

In this framework, the Venezuelan Foreign Minister, Jorge Arreaza, denounced – once again – the disastrous consequences of the coercive measures that the US government has unilaterally imposed on the oil country, which prevent the State from acquiring basic goods to fulfill the needs of the country. population.

The diplomat expressed in his speech the esteem of Venezuela to the american people, regardless of the hegemonic pretensions of Washington.

The People’s Power Minister for Foreign Relations ratified, however, the willingness of President Nicolás Maduro to meet with his counterpart Donald Trump, despite the political differences between the two leaders.

“Venezuela has no arsenal, but its people are stronger than any nuclear weapon”, stressed Foreign Minister Arreaza who, along with a national delegation, fulfills an important diplomatic agenda at the 73rd Session of the General Assembly of the United Nations.

The People’s Forum of New York is a space of diverse social movements within the American city; currently, about 240 progressive organizations are organically articulated. It is also a meeting point of the international progressive movement.