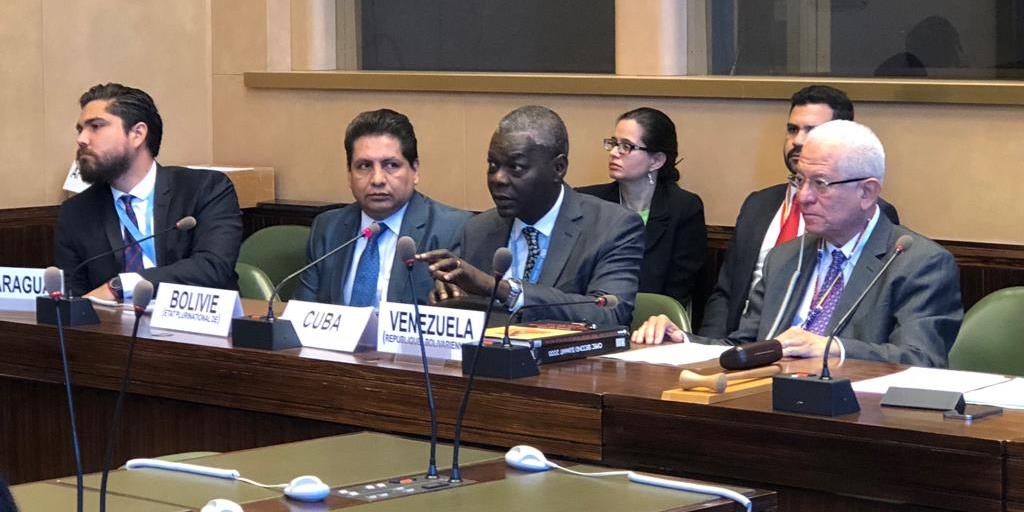 Broad support for Venezuela in the UN Human Rights Council

The Venezuelan Government, chaired by Nicolás Maduro, garnered extensive support in the framework of the 39th session of the Human Rights Council, at the UN, as dozens of countries expressed their determination to support our country and deplored any attempt to undermine the democratic institutionality.

The Permanent Representative of the Republic of Cuba, Ambassador Pedro Pedroso, read a joint statement during the General Debate on item 10, which took place at the Human Rights Council on Thursday, August 27.

In the Declaration dozens of countries, they “reiterated the need for the unconditional respect of the inalienable right of every State to choose its political, economic, social and cultural system, as an essential condition to guarantee peaceful coexistence between nations and consolidate peace”.

The Joint Declaration was signed by the nine countries that make up the Bolivarian Alliance for the Peoples of America- (ALBA-TCP); El Salvador, Suriname; by Asian countries such as China, Lao, Myanmar, Vietnam, Democratic People’s Republic of Korea, Tajikistan; African countries such as Burundi, Equatorial Guinea, Mozambique, Namibia, Sudan, Zimbabwe; by Arab countries such as Saudi Arabia, Algeria, Iraq, Iran, Kuwait, Lebanon, Oman, Tunisia, Qatar, Syria, Yemen, Palestine; besides Russia and Belarus, among others.

Humanitarian crisis to justify a military intervention in Venezuela

According to the Declaration in favor of Venezuela, many countries that are part of the Human Rights Council, either as members or observers, “demanded full respect for the sovereignty of Venezuela, in accordance with the universal principles of non-intervention in internal affairs, and the right to exercise the constitutional, political, economic and social system that nations have sovereignly chosen”.

This Joint Declaration has significant importance, at a time that some of the US government allied countries, seek to activate from the Human Rights Council a mechanisms of tutelage against Venezuela and vociferate – without arguments – on a humanitarian crisis to justify a foreign military intervention in our country.

In the document read by the Permanent Representative of Cuba, the States subscribing to the Joint Declaration “expressed their unrestricted support for the constitutional Government of the Bolivarian Republic of Venezuela, in its commitment to preserve peace and guarantee the democratic institutions of the country, as well as the determination to guarantee the full observance of human rights and fundamental freedoms in Venezuela”.

The countries that signed the Joint Declaration in the UN-Geneva “maintained their firm decision to condemn any initiative that disturbs the peace and democratic stability of the Bolivarian Republic of Venezuela and that threatens its sovereignty. As well as the right that assists them to determine the future of the country which, as established in the Bolivarian Constitution, is a right that belongs exclusively to the venezuelan people”.

These new expressions of support show that the revolutionary government of Venezuela headed by Nicolás Maduro counts on ample solidarity in the world.

Rejection of the interventionist resolution against Venezuela

Given the repeated expressions of interventionism advanced by the government of the United States and its allies, the voice of the South was felt. In this context, the countries that sign the Joint Declaration “agreed to call on all responsible members of the international community to keep from any interventionist manifestation in the internal affairs of the Bolivarian Republic of Venezuela”.

It is important to highlight that countries from all the continents that signed the Declaration in favor of venezuelan democracy made it clear to the world that “they do not support the Draft Resolution “Promotion and protection of human rights in the Bolivarian Republic of Venezuela”, presented by the self-called “Lima group”; and European countries; interventionist initiative that has the approval of the government of Donald Trump.