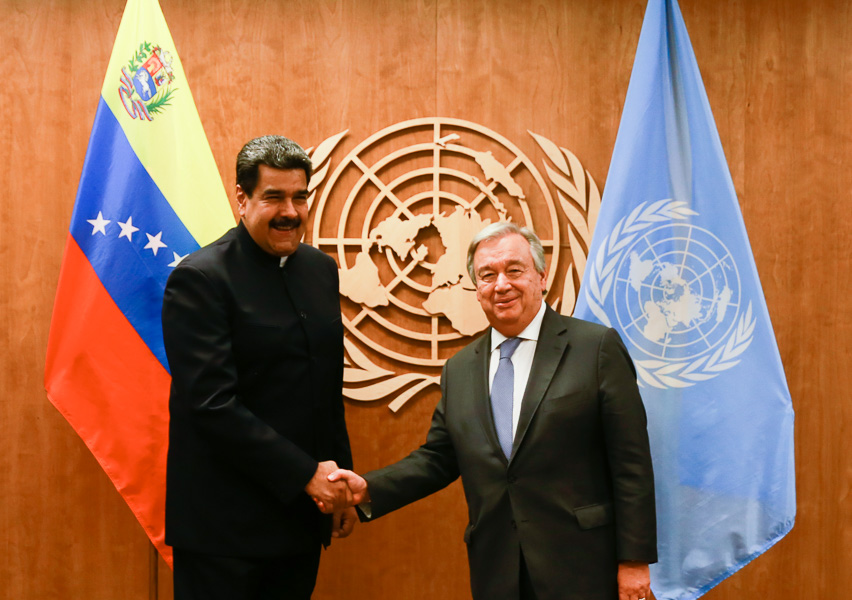 The president of the Bolivarian Republic of Venezuela, Nicolás Maduro Moros, met Thursday with the secretary general of the United Nations (UN), António Guterres.

The meeting, which took place at the headquarters of the multilateral organization, included the participation of; The first combatant, Cilia Flores,  the Venezuelan Foreign Minister, Jorge Arreaza; the ambassador of Venezuela to the UN, Samuel Moncada, and the People’s Power Minister  for the office of the Presidency and Follow-up of Government Management, Jorge Márquez.

The activity is part of the agenda of the Head of State on the 73rd Session of the UN General Assembly, in which he ratified his willingness for a dialogue with national and international opposition,  with different governments of the region, especially with the United States, in order to resolve existing conflicts and strengthen a peace diplomacy.

In that context, he invited the president of the United States, Donald Trump, to establish an open agenda to talk “with humility, frankness and sincerity”.

He also requested support from the UN to investigate the attempted assassination perpetrated against him on August 4.

For his part, during the opening of the 73rd Session, Guterres noted that therre is a mistrust growing  in the world is as a result of the absence of  “a genuine global governance and a fully democratic system”.

“All together, as custodians of the common good, have a duty to promote and support a reformed, revitalized and strengthened multilateral system (…) we must achieve peace, defend human rights and promote the economic and social progress of women and men from around the world” he added.