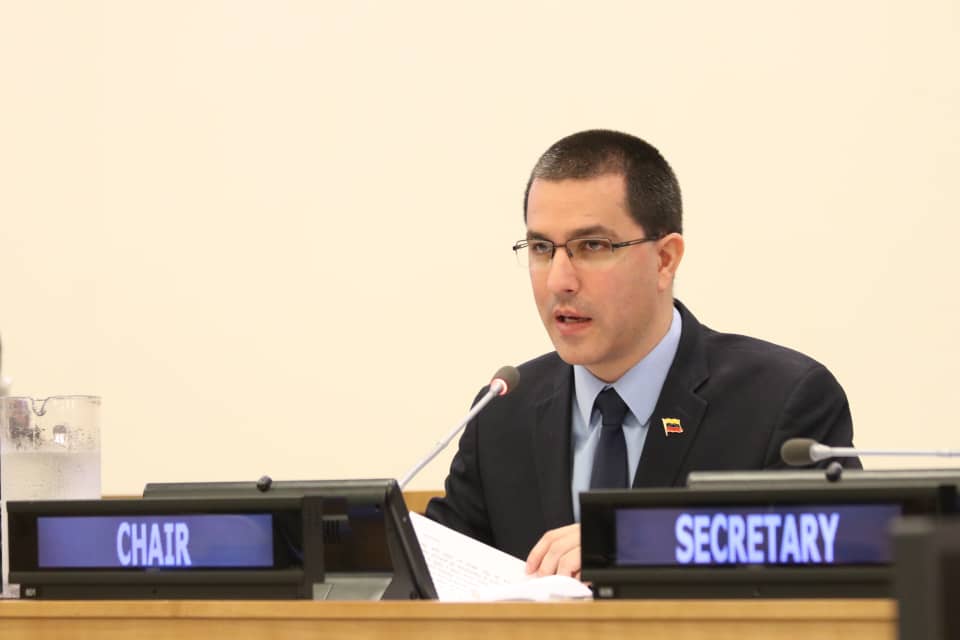 The construction of a culture of peace and the defense of the principles contained in the Charter of the United Nations is part of the political instruments available to the countries of the South to defend themselves from the unilateral and coercive aggressions imposed by the imperial powers against of the progressive governments that safeguard their sovereignty and self-determination, as stated by the FM of the Bolivarian Republic of Venezuela, Jorge Arreaza, within the framework of the ministerial meeting of the Non-Aligned Movement that was held at the 73rd session of the UN

“International law is the only shield that the countries of the South have to defend ourselves from the aggressions of the great powers. All the members of the international community -without exception- by subscribing to the Charter of the United Nations, commit ourselves to respect its provisions” Said the venezuelan Foreign Minister.

before the persistent threats from the United States government which has implemented unilateral sanctions against Venezuela, Arreaza recalled that the foundational principles established in the Charter of the United Nations prohibit war as an instrument of foreign policy, which apparently has been ignored by the government of President Donald Trump, who reactivated the Monroe Doctrine as a mechanism of their foreign policy.

“Hence, the sovereignty and equality of States, non-interference, the right to self-determination, the peaceful settlement of disputes, the abstention in the use of threat or force against territorial integrity or political independence are fundamental principles of particular importance in international relations and for peaceful coexistence among nations”, he said.

In his speech, the venezuelan diplomat said that in the face of continuous threats to peace and international security, it is necessary for countries to redouble their efforts to guarantee effective compliance with and respect for international law that is being threatened by the unilateral policy imposed by some governments.

“We must unite our voices to reaffirm their full validity, to promote, strengthen and preserve multilateralism as the only path to address all these issues together on the basis of international law”, he said.

The venezuelan diplomat said that the nature of the conflicts has changed, and that other mechanisms has appeard – different from military confrontation – to attack sovereign countries such as Venezuela, which has been subject to a voracious media campaign and unilateral illegal sanctions.

“Anything becomes a weapon in the hands of the aggressor; it is about the exploitation of finances, of the economy, of technology, of the internal affairs of each nation. All these practices of war have a pernicious effect on the stability of our nations”, Arreaza said, adding that such actions outside the law transgress the sovereignty of States and flagrantly violate the Charter of the United Nations and international law.

As part of the interventionist strategy against Venezuela, Arreaza pointed out that media corporations intend to “fabricate a conflict based on a supposed migrant refugee crisis”, which they use as a pretext to worsen the economic, commercial and financial blockade to which the venezuelan people are subject.

“From the Bolivarian Republic of Venezuela we renew our irrevocable political and moral commitment to defend the founding charter of this organization and the norms of international law, as well as to respect, preserve and act at all times in our international relationship in accordance with the principles of our movement, which corresponds to the Bolivarian Diplomacy of Peace”, he said.

At the same time, he assured that the Caribbean nation “is committed to participate constructively in all the necessary stories to forge a consensus that will lead us in time to the establishment of an international day of multilateralism and Diplomacy for Peace.”