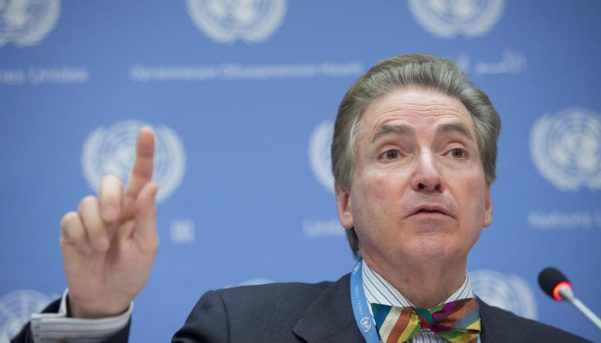 The independent expert of the United Nations (UN), Alfred de Zayas, said that the effects of the unilateral and coercive sanctions applied by the United States and the European Union against the people of Venezuela are considered crimes against humanity according to to the provisions of the Rome Statute of the International Criminal Court.

In this sense, those governments that adhere or not condemn these sanctions become responsible for worsening the economic and financial crisis that Venezuela is going through, which has aggravated the shortage of medicines and has promoted the hoarding of food that is then sold at speculative market prices generating an inflationary increase.

“Humanitarian coordinators in Iraq, Denis Hallyday and Hans-Cristof Von Sponeck qualified as genocidal multilateral sanctions imposed on governments and countries because they generate thousands of deaths and irreparable economic disruptions,” Zayas quoted in the report published last month of August.

In the aforementioned report that exposes the vision of the UN rapporteur of what was his visit to Venezuela in November 2017, refers that in financial matters the blockade against the Caribbean nation has prevented the National Government to make the payments corresponding to the acquisition of food and medicine, this as a result of the worsening of financial operations with banks such as Citibank, Commerzbank and the Deutsche Bank.

In this regard Zayas argues that this type of sanctions are aimed at the failure of countries that propose a new socio-economic paradigm different from capitalism, an issue that leads to the imposition of coercive and unilateral measures to achieve the failure of these economies and, in turn, justify the change of government.

Despite the intense media campaign and the sanctions against Venezuela, in 2015 the Committee on Economic, Social and Cultural Rights noted with satisfaction the progress made by the Venezuelan State in its fight against poverty, malnutrition and the reduction of inequality, issues that are a substantial part of the social and protection policy implemented by the government of President Nicolás Maduro.

The independent rapporteur of the UN warned about the aggravation of sanctions and denounced that the United States is currently training foreign lawyers who will be responsible for drafting legislative proposals aimed at imposing new sanctions in order to suffocate the Venezuelan State institutions.

“Some countries prefer to prolong the suffering of the Venezuelan people with the expectation that the country will be submerged in a humanitarian crisis to justify military intervention”, he said.