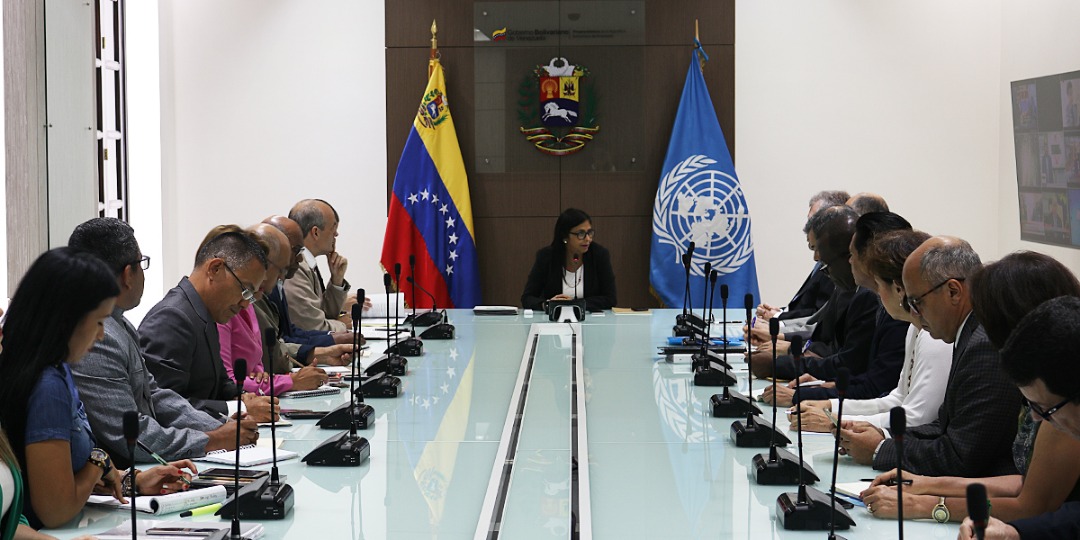 The Venezuelan State will hold monthly meetings to address joint issues with the United Nations system.

The Vice President of the Bolivarian Republic of Venezuela, Delcy Rodríguez and the Minister of Popular Power for Foreign Affairs, Jorge Arreaza, held a meeting with Peter Grohmann, Resident Coordinator of the United Nations System and Resident Representative of the United Nations Program for the Development (UNDP) in Venezuela, where they agreed to strengthen coordination mechanisms in the field of social protection programs, which will be evaluated monthly with the UN Agencies and Programs.

The activity that took place this Wednesday at the headquarters of the Executive Vice Presidency in Caracas, had the participation of the vice presidents for the Social Area, Planning, and the ministers that make up the Executive Cabinet who also have responsibilities with the aforementioned agency .

During her speech, Vice President Rodríguez reported that the meeting addressed issues related to education, health, food, environmental preservation and all social issues in general, framed in the protection carried out by the Bolivarian Government through of the multiple Social Missions created by the commander Hugo Chávez and deepened by President Nicolás Maduro.

“In this meeting, issues related to all areas of cooperation were addressed, with a common goal between Venezuela and the United Nations, which is the right to peace and the right to development of peoples,” said Rodríguez.

The vice president criticized that the social investment granted by the National Government for the protection of the people, which has been the victim of a voracious economic war promoted in part by the unilateral sanctions imposed by the US government and the European Union, is not expressed in formal indicators.

“We have addressed aspects of the social investment that Venezuela makes in the area of ​​health, education and the social and we saw how many times that is not reflected in formal indicators, which is what is called non-monetary. It is not expressed in the subsidies granted by the Bolivarian Revolution and particularly the model of Bolivarian Socialism for the direct attention of the population, “he said.

Rodríguez announced that they asked the International Organization for Migration (IOM) for their intervention before the governments that impede the procedures for the execution of the airlift – carried out by the Venezuelan Foreign Ministry – for Venezuelans who wish to return to the country through the Plan Back to the Fatherland.

“Yesterday when we met, we said that we have to guarantee the human rights of our compatriots in other countries who have violated their rights to dignity, work, wages, human rights and guarantees in general. , we have asked for that technical support, “he said.

For his part, the Chancellor of the Bolivarian Republic of Venezuela, Jorge Arreaza, stressed that the 2030 agenda promoted by the United Nations Organization for Sustainable Development, is intended to strengthen peace and access to justice and is combined with the Plan of the Motherland 2013-2019.

“The 20-30 agenda and the Plan de la Patria are instruments that can be combined almost perfectly, like few national development plans that can be combined with the United Nations. If the world were to achieve sustainable goals by 2030, we would be in the presence of a Revolution from our point of view and Venezuela will set the example, “said Arreaza.

The Foreign Minister assured that they will maintain contact with the agencies and agencies of the United Nations, which have responded to the unilateral aggressions and the economic blockade that the United States maintains, a government that has violated the human and social rights of the Venezuelan people.

“The United Nations has always been on the side of the Venezuelan government, and it is precisely what the UN must do when it comes to imposing unilateral force; multilateral force must be activated. Cooperating with Venezuela and countries that suffer unilateral aggressions we will be able to safeguard their sovereignty and social rights of the peoples, “he said.

After the meeting ended, the Resident Coordinator of the United Nations System, Peter Grohmann, expressed his pleasure to strengthen the integration mechanisms between the international organization and the Venezuelan government, which is why he described the meeting as a constructive meeting. first hand the programs that Venezuela executes for the protection of its citizens.

“We are in a phase to identify the priorities for the future, within the framework of cooperation for the country and obviously we will address both the urgent issues, medium and long term, always under the sustainable development scheme. We are going to follow up on the challenges the country is facing”, he said.