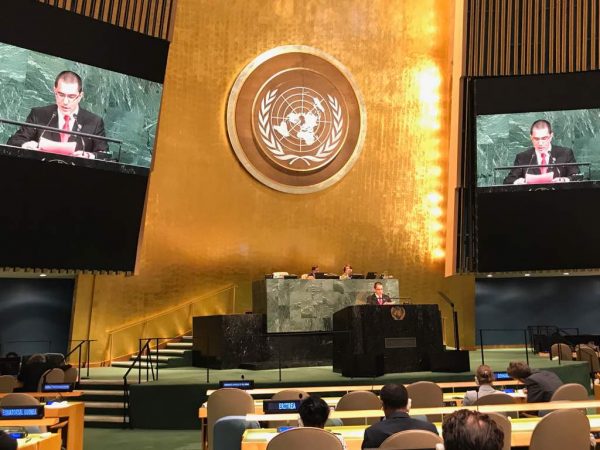 The Foreign Minister of the Bolivarian Republic of Venezuela, Jorge Arreaza Montserrat, said that the Bolivarian Government will always be willing to help and open paths of peace between the Government of Colombia and the Revolutionary Armed Forces of Colombia (FARC), during his speech at the Assembly General of the United Nations Organization (UN), in New York.

“Bolivarian Venezuela will always be willing to help open paths of peace. That is why we congratulate the application of the Peace agreements between the Government of Colombia and the FARC, to which so much effort and energy was dedicated, both Commander Chávez and President Nicolás Maduro. Likewise, we will continue to accompany and facilitate the conversations between the Colombian government and the National Liberation Army (ELN), which take place in the Republic of Ecuador”, said the Venezuelan Foreign Minister.

In a diferent sense, the Venezuelan Foreign Minister said that “Venezuela is not a drug producing country. International institutions certify it. We collaborate sovereignly with all neighboring and non-neighboring countries in the fight against drug trafficking”.

“We express our concern about the increase in drug production in our neighboring Colombia. However, we have always denounced that it is the consuming countries that are primarily responsible, as they constitute powerful poles of attraction, both for production, and for drug trafficking, and must assume real control over the entry and distribution of narcotic drugs in their territory”, he said.

The Esequibo belongs to Venezuela

In his speech, Foreign Minister Jorge Arreaza also thanked the efforts of the Secretary General of the United Nations, António Guterres, which promotes the paths of solution for the fulfillment of the Geneva Agreement.

“We thank the Secretary General of the United Nations, António Guterres, for his sincere efforts to facilitate the application of the Geneva Agreement through the Good Offices mechanism, to seek a practical and satisfactory solution for the parties, in the case of the territorial controversy that we maintain with our brothers and neighbors of the Cooperative Republic of Guyana”.

The Geneva Agreement was signed on February 17, 1966, where the Governments of Venezuela and the United Kingdom of Great Britain and Northern Ireland, in consultation with the Government of British Guiana agree on the territorial limit for both nations.